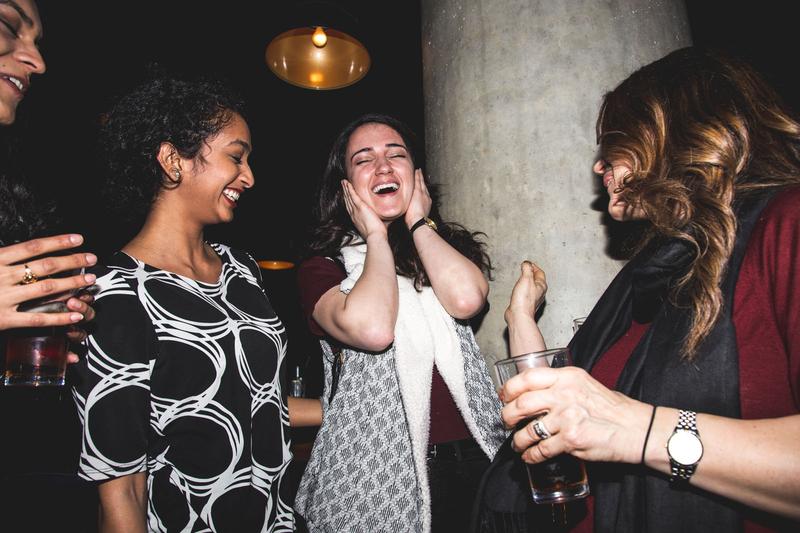 Ava Nasiri took away the big win — the “Queen of Clubs,” as she was referred to by the elections administrator, was elected the 107th president of the AMS. Photo Phillipe Roberge / The Ubyssey

Last Friday saw the culmination of weeks of work for AMS election candidates and staff — the winners of the elections and the results of the many referendum questions also on the ballot were announced.

Questions that passed included increasing the fees allocated towards the World University Service Canada, approving the U-Pass, mandating the AMS to bring back the Gallery Lounge, housekeeping by-law and constitution changes, changes to the health and dental plan and a campus culture and performance fee.

Questions that did not pass were a fee increase to AMS fees of $4.20 — meaning the society will face a $400,000 deficit next year — and changes to the way AMS Council handles referendum questions. Although the majority of voters for the latter question were in favour, it failed to meet quorum.

As the winners of the different executive, senate and board positions were announced, the Pit was flooded by the candidates and their supporters. Ava Nasiri took away the big win — the “Queen of Clubs,” as she was referred to by the elections administrator, was elected the 107th president of the AMS. On elections night, Nasiri said her only response was being humbled and honoured.

“I had no idea. Jenna is so phenomenal and amazing and talented and hard-working that I had absolutely no idea. It was hard to judge,” she told The Ubyssey on results night. “All I can say is respect and thank you.”

While Omassi did not win the presidency, she did win one of the five spots on Senate but later gave up this spot, which will instead be filled by councillor Daniel Lam.

“It is just the right decision for me right now, allowing me to move away from the AMS and put my all into other campus endeavours to continue to support and advocate for students,” said Omassi in an email to The Ubyssey. “Senators who have been successful in their elections thus far have all the skills and expertise to continue on the projects that are most important to students and I have full faith in them. I am having an amazing experience on Senate and would not have given up this year for anything, and so I would like to allow another emerging student leader to have this same experience.”

Lam said he felt elated at the news, but also that it came as a shock given that he had fully accepted his defeat on elections night.

“It's a bummer I never had that sweet victory moment in the Pit where I’m crying tears of joy and frat boys are surrounding me and pouring beer over my head,” said Lam. “But a victory is a victory and I’m happy regardless. I’m definitely looking forward to working with different senators.”

Those other senators are Samantha So, Kaidie Williams, Lina Castro and incumbent Nick Dawson. So also took home the title of VP Academic and University Affairs.

The image of tears of joy and overflowing beer is an apt description of what followed the other victors over the course of the announcements that evening. To no surprise, unopposed candidate Louis Retief won VP Finance, at which point he announced that the first thing he was going to do is “have a couple more beers and just have a fucking good time with the new execs.”

Electing those with previous ties to the executive positions seemed to be the theme of the night. Chris Scott — a new transfer student to UBC, but one who got heavily involved right away as the vice-chair of the Student Administrative Committee — took home the title of VP Administration despite strong competition from Alan Ehrenholz, EUS president.

“I was not expected to win, I don’t think, and it was all thanks to them,” said Scott, referencing his team of peers who helped his campaign. “I’ve been working behind the scenes for a long time so it’s nice to finally be able to take the executive position.”

Kathleen Simpson, also with more direct involvement within the executive portfolio that she was running for, took home the title of VP External. Simpson pulled off a strong performance in the Great Debate and, on results night, said that she worked through the fear of doing classroom announcements until they no longer made her nervous.

The VP races were also won by large margins each time, although the abstention rate — while normal for VP races — was much higher, at around 30 per cent.

The breakdown of votes and proportion of the student body who casted a ballot has now been made public.