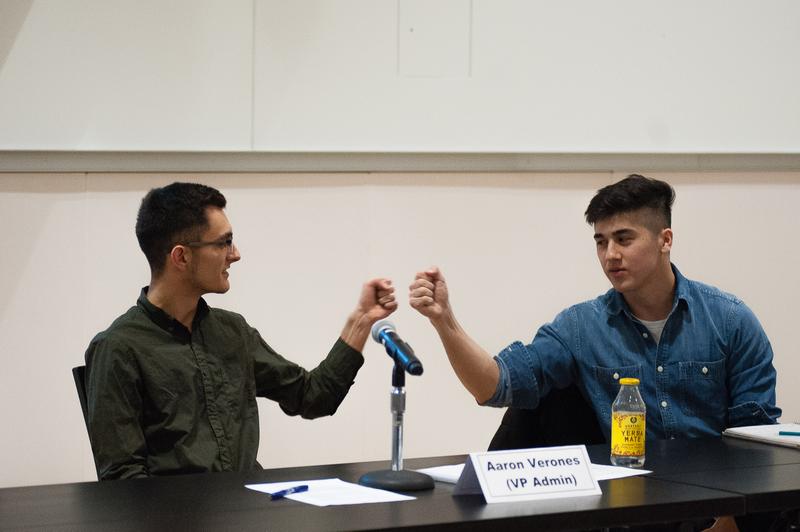 AMS VP Administration candidates Chris Hakim and Aaron Verones went head-to-head Tuesday evening in the second elections debate. They have both been highly involved in the AMS, with Hakim currently serving as an AMS councillor and Verones previously working as assistant to former AMS President Ava Nasiri.

After introducing themselves, the candidates started by answering what they would do differently than their predecessor if elected. Hakim said that he would prioritize sustainability, while Verones touched on more recent news by saying he would change the February 7 passing of the expulsion policy.

“Perhaps instead of over-legislating the behaviours of our students, we should address the root cause of why this is happening to begin with,” Verones said.

We also need to give options for students to appeal these decisions outside of the Operations Committee, perhaps the AMS ombudsperson would be a better choice.”

Hakim: I would love to see the sustainability aspect of the portfolio -- which staff are working so hard on -- really prioritized. Sustainability groups really rely on the VP Admin for help and approval and it's sad when they don't get that.

On the constant topic of room booking, Hakim spoke excitedly about the issue not being a simple software fix.

“Year after year, the VP Admin is always promising some online, quick, efficient system that will fix everything,” he said. “Let me tell you right now, it’s not going to happen. If that fix was so simple, we would have had that multiple candidates ago, multiple administrations ago. Believe me.”

Instead, Hakim said that it is about instituting clear and proper guidelines for staff, groups and constituencies to follow. He also wants to look into an online calendar that shows when the booking goes through, as well as where and when the booking takes place.

Verones agreed that it was a large issue, but thought that the way to address it should be through a formal review.

Once the open period began, Hakim asked Verones what his thoughts were on the AMS Art Gallery, which he said was suffering from an activity crisis.

Verones responded that he would create more events in the space to draw more students there, while criticizing Hakim for advocating to add another staff member towards promoting the gallery. Claiming that this decision would give over $28,000 to three people running the Art Gallery, Verones wants to instead devote more money to sustainability projects and support for sexual assault survivors.

Hakim then rebutted that since sustainability initiatives get money from specific funds, he thought that devoting this money to the Art Gallery was worth it.

“I don’t think my opponents called it out as accurately I wish he did,” Hakim said.

The Ubyssey also fact-checked that the AMS only spent $14,665.50 on two directors and an assistant last year, making it unlikely for the addition of another staff member to double the cost.

The two also briefly debated their opposing positions on whether to solidify procedures. While Hakim wants to create more binding documents to “provide consistency” from year to year, Verones said that doing so would only exacerbate problems. Hakim responded that policies aren’t “necessarily there forever,” and can be changed.

Hakim: I wanted to ask my opponent about his attention towards sustainability, haven't seen it much in his topics.
Verones: I would recommend my opponent read my platform again, there's actually a lot on there.

The debate then shifted to questions from the audience, two of which were about technical management of clubs. The first question came from Rodney Little Mustache, an AMS presidential candidate, who asked about how groups could get an office in the Nest.

Verones responded that the Nest had outgrown its capacity for clubs before it was even open. He then said that in order to make it fair to all clubs, there is a process in place for applying for an office, but he hadn’t been on the committee that allocates them. He also said that he was open to speak more with Little Mustache about the issue.

Hakim said that while he is not responsible for this issue at this point, the AMS is committed to treating all clubs fairly.

Another audience member said her club was having problems getting a club credit card and asked how the candidates would change things.

Hakim responded that putting things in code would be helpful for making guidelines on how the AMS respond to these types of requests. Verones said that while he thought the question was more of a VP Finance issue, he was committed to better communication with clubs and a more centralized system.