UBC faculty and students took to Twitter last Thursday to announce their displeasure at a memo slipped under their doors that prescribed right-wing readings and encouraged them to report “truth or social justice type” issues directly to President Santa Ono.

This letter campaign is preceded by another in July 2017, which used a different memo. That campaign was smaller in scope, as it was only meant for departments that the letter writer — 29-year-old fourth-year philosophy major Franz Kurtzke — viewed “most critical.”

While philosophy is identified as one of them based on one recipient of the July memo, it is unclear what other departments are included.

Poetry Professor Dr. Stephen Guy-Bray, who initially tweeted about the August letter, told The Ubyssey he was concerned that Kurtzke set up what he sees as a false battle between social justice and truth.

“The problem with that is that social justice is associated with the left wing, and the alternative then is not right wing or conservative, but truth. So this is an attempt to dictate the terms of a debate by starting out by presenting the right wing way as ‘truth’ rather than as a political position,” Guy-Bray said.

This has just been slipped under my office door (& apparently everyone else's). It is bad, especially the invitation to report. pic.twitter.com/N0HVwpkmX6

Guy-Bray said he wasn’t too worried as the letter came from a single person, not a group, and it doesn’t seem like many are taking him seriously.

“Someone on Twitter today said he's actually considered too weird even by the right-wing club here on campus,” he said, referring to the UBC Free Speech Club.

While the club considers itself apolitical, most of the members lean right. However, when Kurtzke approached their Facebook group looking for help with a letter writing campaign, he was roundly mocked for his rapid commenting style — dubbed “Franzposting” — in which he called members “ferals” and said he wanted to “confuse the shit out of the radfems and sjws” with “some kamikaze shit.”

An executive posted a note distancing the club from Kurtzke shortly after he left the group, noting his “incoherent and threatening” messages and alleged harassment of club members. 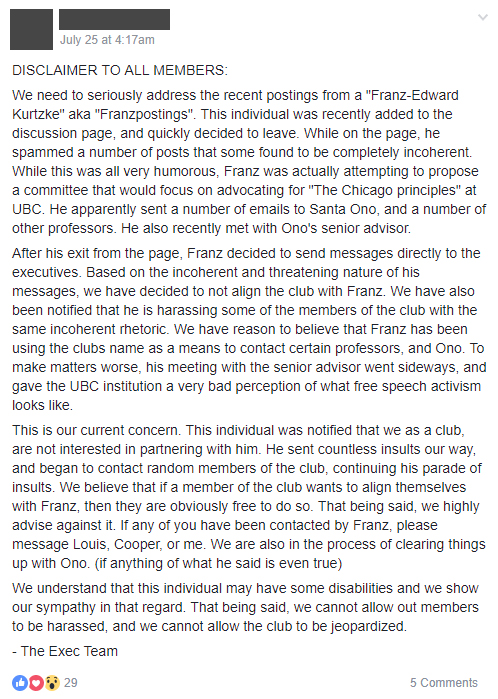 The executive requested we block their name, as the Facebook group is private. UBC Free Speech Club Discussions

Kurtzke holds an equally low opinion of the club.

“The execs, in addition to being useless, frankly, they have massive fucking egos,” he told The Ubyssey. “They have no idea what the fuck they’re doing.”

Kurtzke said his inspiration for the campaign was his experience pitching an article to this paper about rape culture, during which he said he was “bullied” by female staff members.

“I was treated so incredibly rudely that it led me on a totally different life path,” he said.

That path led Kurtzke to social psychologist Jonathan Haidt, who argues that universities had to choose between a commitment to truth or social justice. Kurtzke said he spent months researching social justice and came to the conclusion that universities were in the middle of a “philosophy war” — demonstrated by free speech issues like those involving Jordan Peterson and the University of California Berkeley — and should adopt the Chicago Principles, a commitment to free speech made by the University of Chicago, Purdue and Princeton.

Kurtzke refused to expand on how that war was playing out at UBC, aside from mentioning the incident at The Ubyssey multiple times. He also said many professors at UBC supported him, but refused to name any of them.

Once the principles are passed, he said, “the situation will resolve itself organically to a great degree.”

Kurtzke also stressed that he was not against social justice as a concept — just in its current form. He believes old ideas about oppression haven’t caught up to the new reality that men and women are equal.

“The women have been cheer-led the entire way by their mothers and grandmothers. And so there’s actually some inequality there,” he said.

that last bit is my favourite part. trying to imagine my mum and grandma with pom poms cheering me on all the way. pic.twitter.com/w6nc7Yjz1g

He pointed readers toward the Heterodox Academy (HA), which asks professors to support “viewpoint diversity” in a bid to correct what they see as a leftward slant to most classrooms.

“I joined the day after Trump was elected president,” said psychology Professor Dr. Steven Heine, who self-identifies as a liberal.

“I realized then that I don’t understand people anymore, and as a psychologist who studies issues such as where people’s attitude come from, it feels like we very much become part of a bubble all throughout society, and in academia too, where we are surrounded largely by people who share our own values,” he said.

Political science Professor Dr. Paul Quirk’s motivations for joining are more closely aligned to the concerns outlined by HA. He views that the moderate and conservative students could be held back in a predominantly left-leaning academic environment or that research would suffer if only liberalism is used as the frame of interpretation.

For a broad response to these concerns, HA currently suggests mainly symbolic acts, such as adopting the Chicago Principles or sharing writing on the topic.

When asked for tangible solutions, both Heine and Quirk admitted that “there are no easy fixes” beyond being mindful about biases against different political viewpoints.

“You could imagine that someone might say academic department should have a search for a new faculty member and specify that the search will be for a conservative, but [HA] definitely does not endorse that strategy,” said Quirk. He later mentioned that HA does suggest having political diversity be treated as a form of diversity to be promoted by universities, but its website does not explicitly mention affirmative action for conservative academics or any other tangible actions.

Regarding the more specific issue of protests, they offered a much clearer stance — restricting unpopular opinions is not only against freedom of speech, it also makes it harder to defeat them. Instead, they suggest that opponents of these ideas hold counter-protests or arrange talks that would critique these views and offer the alternatives.

“It helps us to confront these ideas — they exist in the real world. If we keep unpopular opinions from being discussed at university, it isn’t preparing students for when they graduate and enter the real world and find that these ideas are far more common than they should be,” said Heine.

They also distanced themselves from Kurtzke.

“Franz Kurtzke has no association with Heterodox Academy,” wrote Quirk in a follow-up email. “We were completely unaware of his plans to distribute his message until someone saw some of the Twitter messages about it.”

The letter has been reported to Ono, according to Guy-Bray. He said he doesn’t want to silence the student, but he hopes that Ono will reaffirm professors’ rights to academic freedom.

On August 21, Dean of the faculty of arts Dr. Gage Averill issued an official statement on the topic.

While Averill acknowledged that Kurtzke’s campaign qualifies as free expression, its call for reporting “truth or social justice type” issues directly to the administration is not because it “could be interpreted as an effort to stifle the expression of ideas.”

He also reaffirmed the university’s commitment to academic freedom, and stated that Ono and Senior Advisor to the Provosts on Academic Freedom Dr. Neil Guppy — the two individuals who Kurtzke recommended the issues be reported to — “will not be party to any campaigns to thwart free and open dialogue on campus.”

Students, staff and faculty are also recommended to contact campus security and the RCMP if they experience threats that stem from rising “social divisiveness.”

This statement then received criticism from philosophy Professor Dr. Paul Russell, who wrote in a letter that it is “unclear and evasive on some key issues.” In particular, he argued that given the campaign’s promotion of free speech via the Chicago Principles, Kurtzke’s call for reporting “truth or social justice type” issues to the administration should only be viewed as a call to report free speech violations — the opposite of restricting speech.

“From any reasonable perspective, if there is any “intimidation” going on here, it is by senior faculty who are trying to silence and suppress undergraduate students who have (legitimate and reasonable) concerns about free speech issues at UBC,” Russell wrote.

His full letter could be accessed here.

Overall, despite the initial pushback, Kurtzke believes that he is on the right path.

“I know what’s going on, and I think I see a path to resolving the campus culture wars,” he said. “I think I pretty much nailed it.”

Kurtzke did not immediately respond to an interview request regarding the statements from UBC and the professors who are members of the Heterodox Academy. This article will be updated as his comment becomes available.

This article has been updated to clarify that the Chicago Principles have been adopted by the University of Chicago, Purdue University and Princeton University. Previously, only Purdue was mentioned. It has also been updated to include information about another letter campaign, as well as responses from the dean of arts, philosophy professor Dr. Paul Russell and professors who are members of the Heterodox Academy.