Are more US citizens going to apply to UBC this year? 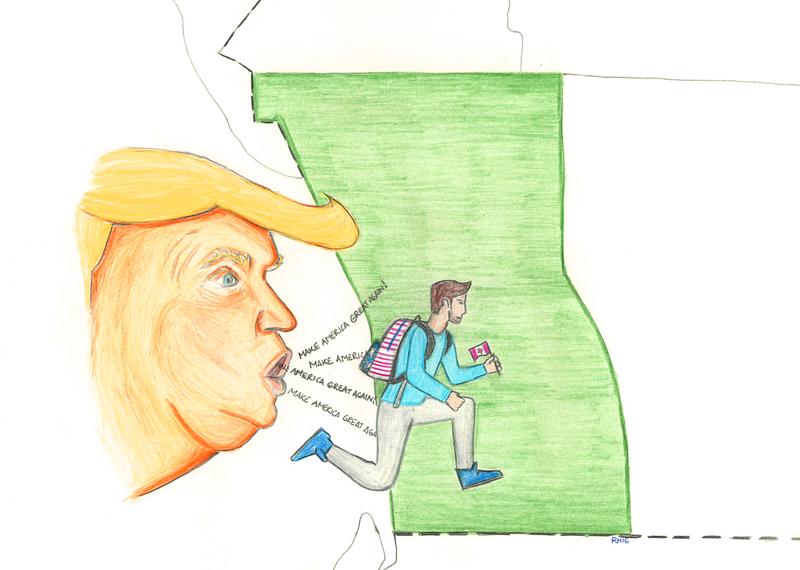 Since President-elect Donald Trump’s win of the US election, UBC has been receiving a massive number of website hits coming from Canada's southern neighbour. Americans have been browsing UBC’s graduate and postdoctoral studies programs, and lurking on the university’s Facebook pages.

Melinda Johnston, communications manager of the faculty of graduate and postdoctoral studies programs, said in an emailed statement to The Ubyssey, “[The website] usually gets 9 to 10 per cent of sessions from the US. From November 8 to 10, US sessions accounted for around 23 per cent of our total.”

A website “session” is defined as a group of interactions that take place on a website within a given time frame. This number is up by almost 206 per cent of total sessions from 2015, according to Google Analytics.

Sessions from eyes worldwide have also greatly increased since last year. From November 8 to 30, 2016, the graduate programs website received 206,902 sessions. This is a massive 25 per cent increase in traffic. More specifically, 27,011 of these hits were from Americans, accounting for 13.1 per cent of total sessions.

On November 9, the day after the US election, UBC President Santa Ono tweeted about a graduate program website receiving a massive number of hits in a span of three hours.

A single graduate program website at UBC received >30,000 hits between midnight and 3am PST after the US election

“I suspect he was referring to a picture on our Facebook page. On September 8, a colleague took a picture of a rainbow over the Canada flag next to the Rose Garden. I posted it and by late that night, it had gotten around 30,000 views,” said Johnston.

Putting this into context, a high-performing post on the UBC Grad School page typically receives 1,200 and 3,100 views in total. However, the origins of these hits have not been confirmed.

Ono’s tweet created a buzz amongst students and staff alike on campus, sparking conversation about our American neighbours wanting to migrate up north for school. Major news services have also picked up on the tweet, such as the Vancouver Sun.

This has led to speculation that the university will see a spike in applications from prospective American students for the coming school year. According to the UBC Senate’s Annual Report on Enrolment for 2014/15, only 11 per cent of students in both undergraduate and graduate programs are from the US.

Despite the buzz, political science PhD candidate Dominik Stecula said that “the hypothetical ‘I’m moving to Canada if X happens’ claim has been popular among American liberals for years now.”

In an email with The Ubyssey, he discussed some of the reasons as to why American students would want to travel and live in Canada for the next four years.

“Many people think that by moving to Canada, [it] provides them with an opportunity to live in a more left-wing utopia,” he said. “More realistically though, I think the draw is the appeal of our Canadian universities. Top-tier Canadian schools like UBC, U of T and McGill are a relative bargain compared to similar schools in the US.

“Canada and the US are not that different,” said Secula. By sharing trade, economy and foreign policy, their fates are intertwined. “There are obviously differences between the countries in terms of policy. There are different approaches to healthcare and the gun culture is dramatically different [in the US], but overall, these differences are not dramatic. At the end of the day, both countries are established, representative democracies that are doing rather well.”

As for Canadians looking to travel, work and live in the US under a Trump presidency, Stecula noted that the level of comfort would depend on whether or not Trump delivers on his campaign promises.

“If he goes down the path of delivering on some of the deeply disturbing campaign promises of profiling and registering Muslims, and promoting other racist and xenophobic policies, then I could envision a scenario in which it would probably best be avoided to study in the US.”

Stecula does think that this is unlikely to happen. Because many post-secondary schools in the US are in liberal college towns, they will be relatively safe places to work and study. He also touched on the concerning implications that could arise for student immigrants living in the United States.

“Young immigrants who were granted legal status under President Obama ... are in danger of losing their status, and not being able to attend universities and get financial aid,” he said in his email. “[This] would be absolutely devastating to them and their families, which Trump made a promise to deport.”

With Trump’s inauguration coming up fast, American and Canadian students alike have many hard choices to make about education, travel and work plans for the coming years. It is unknown what a “Trump-merica” will look like, but UBC’s arms are open.