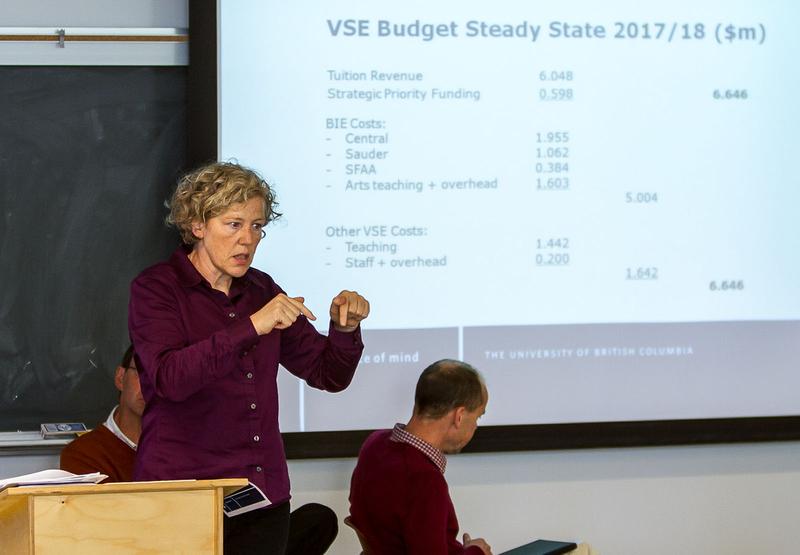 Angela Redish, UBC's interim provost, at a 2012 presentation about tuition for the Vancouver School of Economics at UBC. Photo Kai Jacobson/The Ubyssey

As the university prepares to raise international tuition by around 45 per cent over the next three years, the administration says they lack existing data to measure what impact the increases will have on the socioeconomic makeup of the international student population.

“I would say we don’t currently have what I would consider a good measure of diversity,” Interim Provost Angela Redish told The Ubyssey.

Redish said UBC tracks international student diversity through the number of countries represented — currently around 160. They also look at the proportion of international students applying for needs-based financial aid and those attending through various scholarship programs such as the MasterCard Foundation’s sponsorship of students from African nations.

I would say we don’t currently have what I would consider a good measure of diversity.

“’How many different countries do we have students from?’ is kind of the depth of our measure ... I don’t think that’s very good,” Redish said.

Unlike domestic students who apply for government aid, Redish said there was no easy way to verify financial statements from applicants outside Canada so they did not collect them.

“I don’t think we are unique and I don’t know if any university has good measures of socioeconomic diversity for international students,” Redish added, noting that some information might exist in surveys of the student body.

That lack of data means there is no obvious way for the university to track the economic diversity impact of what will amount to over a 50 per cent increase in international tuition over four years if the Board of Governors signs off on the increase at their November meeting.

While UBC's current international tuition fees are lower than comparable institutions, a 2014 report from the Canadian Federation of Students noted that such fees at most Canadian universities are higher than the average annual income of families in developing countries.

While consultation on the increases open today, Redish said they will focus on how to spend the additional revenue and not on whether or not students support the increase.

Seven and one-half per cent of tuition after the increase will continue to go toward international student financial aid.