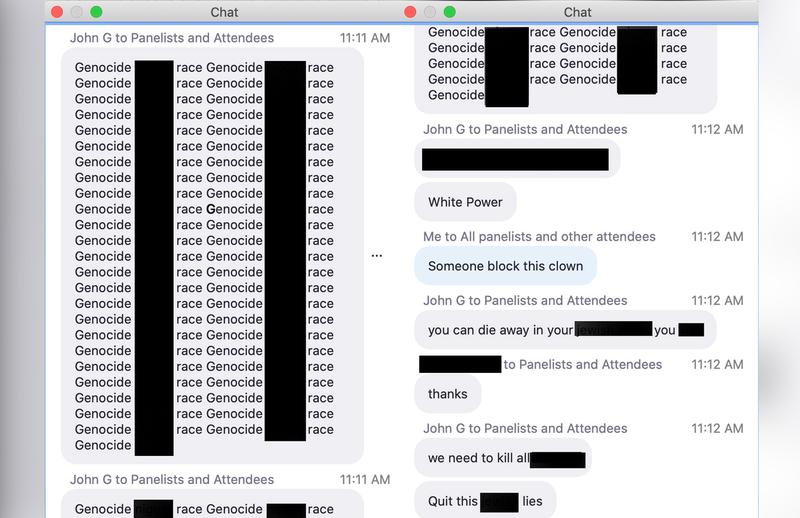 Attendees in the chat were quick to call out the messages. Screenshot from Zoom

An attendee spammed the Zoom chat of a UBC sustainability webinar with racist hate comments in the morning of March 5.

The attendee sent the slurs in the chat right before Onifade was going to speak on climate justice in Africa, which he said was unexpected.

“I was the only [B]lack, African speaker. Without realizing it, I almost lost balance and focus. For my presentation to go on, I practiced what I usually do when faced with racism: ignoring the attack when I can. I managed to make my presentation,” Onifade wrote in a statement to The Ubyssey.

Attendees in the chat were quick to call out the messages, with the conference organizers blocking the chat and deleting the user from the webinar within several minutes.

Both Harrison and Kung said they didn’t see the racist slurs in the chat until someone brought it to the moderator’s attention in the Q&A box.

The webinar carried on with the remaining presentations, addressing climate change within the context of Indigenous sovereignty, global policy and BC pipeline projects.

“Their goal is to distract from the real conversation to hopefully have the event itself postponed or stopped,” Kung said. “I think, for me, it only reinforces that we have to continue with these [climate justice] conversations even if they are uncomfortable … because that’s the only way we are going to get through it.”

Williams-Davidson echoed the connection between racism and climate change.

“I see that the roots of both of those issues of racism and of addressing the climate crisis are one in the same,” she said. She also spoke of the need to have training for webinar hosts on how to deal with incidents like these swiftly.

“I’m not saying in any way limiting freedom of speech, but when you cross the line into racist behaviors and there must be some way to stop that immediately,” she said.

Matthew Ramsey, director of university affairs at UBC Media Relations, wrote in a statement that the comments were “completely unacceptable” and that an attendee reported the incident to the police.

“UBC Sustainability Initiative has apologized to those who joined us for the webinar today and regrets the incident. USI is reviewing its approach to webinars to ensure this does not happen again in future,” Ramsey wrote.

The University RCMP could not be reached in time for publishing.

Onifade thanked the conference host and fellow panellist Harrison for the apologies they sent to him.

“I would like to condemn racist behaviour at UBC and beyond. Having faced racism during another webinar and in person innumerable times, I strongly hope we can create more safe spaces for everyone, especially [B]lack and coloured minorities like me,” Onifade wrote.

“I am not discouraged by the incident. I will continue working hard to carry out my scholarly and community duties at UBC.”