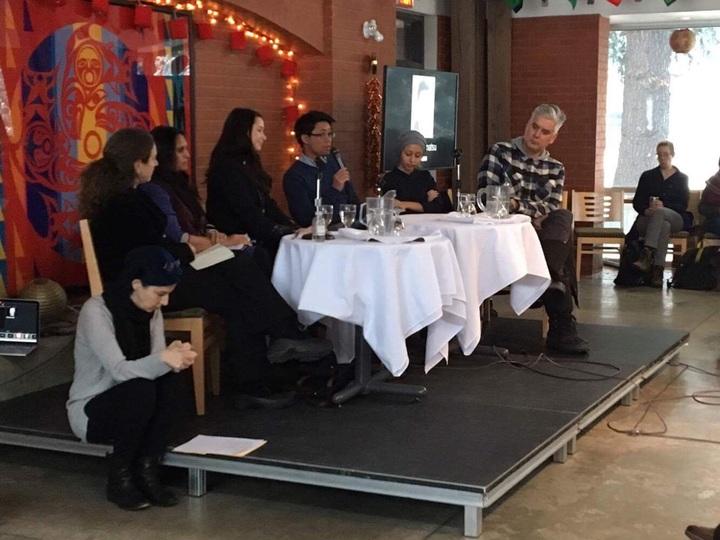 Yesterday’s “Ban the Ban,” a learn-in for UBC students faculty and staff, was hosted as an “immediate and urgent response” to President Trump’s executive order restricting immigration and travel into the United States.

Hosted at UBC’s St. John’s College, the event attracted more people than the space could allow. Dozens of people were prevented from attending due to fire code concerns. Some students tried to follow the discussion by lying on the ground near a window. Others were later moved into the social lounge and the discussion was broadcast into that room via the speaker’s mic.

Ban the Ban featured eight speakers who examined the travel ban and explored the concept of belonging through a combination of personal stories, history and critical theories. Some areas for consideration when trying to push back against the ban were also mentioned.

One of the speakers, history professor Dr. Henry Yu, talked about the power of symbols.

“Nations have not been very powerful at asserting their sovereignty at borders,” said Yu. “What is effective is using other means to dehumanize people like through metaphors and narratives. ​For instance, there is already a fence [on the US-Mexico border]. It doesn’t really stop people, but it’s a way to think about who belongs and who doesn’t.”

Another panelist, Dr. ​Sunera Thobani, associate professor at the Social Justice Institute, talked about the “fusion of ​race, gender, sexuality and religion” in regards to Islamophobia and its rise.

“Muslim women are now seen as the most oppressed, and Muslim societies are seen as ​the most patriarchal, the most homophobic,” said Thobani. “[This thinking] isolates the Muslim community ... ​and Islamophobia is now a dominant part of global politics.”

Throughout the event, speakers emphasized that the exclusionary nature of this executive order is not something new. The panel pointed to the internment of Japanese-Americans and Canadians, the Holocaust, and the historical and ongoing problems facing Indigenous people, amongst others.

Iman Baobeid, a graduate student, also reflected on her experience. Personally affected by the executive order, Baobeid told stories of her family fleeing from Yemen and facing difficulties entering certain countries. As Yemeni citizens, they were unable to enter several countries.

“The US’s travel ban is a rupture, but not singular,” she said.

Overall, students seemed to have a good experience, but some did express wanting more from the event.

“I left with a very positive impression of the panel and I agreed with most of everything that was said, particularly that Canada is not an exception when it comes to racist immigration policies,” said Kacey Ng, a third-year arts student. “I wish they were able to speak for longer, but I recognize that this event was pulled together [last] weekend and they tried to include a large variety of people to make sure many voices are heard.”