UBC community feels the impacts of BC wildfires 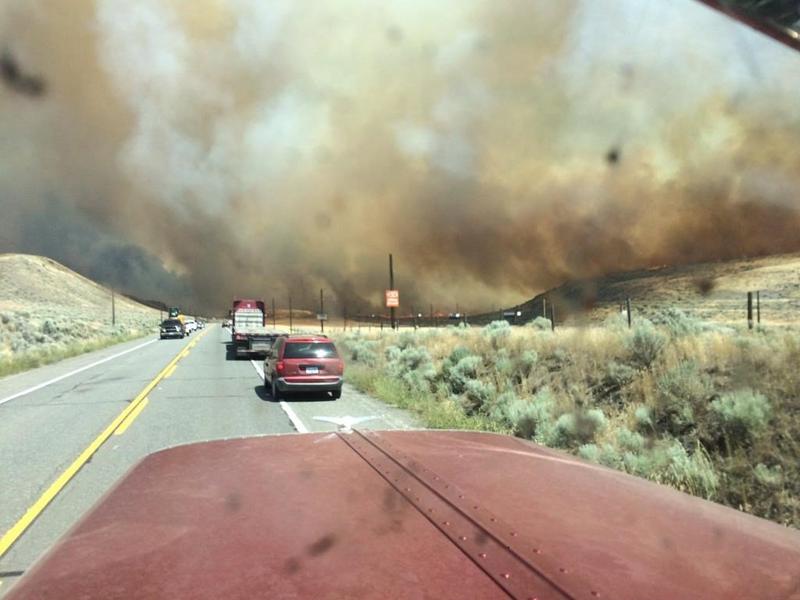 According to National Observer, this wildfire was burning at Ashcroft on July 7. Theo Faber/Twitter

After two days of no electricity and wildfires burning far off in the distance, UBC Forestry Professor and Associate Dean Sally Aitken and her husband left their cabin in the West Chilcotin region to make a harrowing drive home via Highway 20. While her husband drove, Aitken recorded the devastation around her.

The video, which has since gone viral, shows the couple driving under a thick cloud of smoke as various wildfires burn down the trees beside them. Dead power lines were on the ground, while lost cattle roamed the area. Flames from the Hanceville wildfire surrounded the road.

Video of our escape through the Hanceville fires yesterday evening. Hwy 20 was open & it was still daylight above @JWagstaffe #bcwildfires pic.twitter.com/zE91oOD4dW

“It was really frightening,” said Aitken. “We were driving the same direction as the wind, so we were driving from the back of the fire to the front, oriented to how the fire was moving.”

In a particularly dark portion of the video, their car goes under a large cloud of pure black smoke. According to Aitken, they were under this column of smoke for about 10 kilometres.

“The visibility was terrible, and that was the most dangerous part — not because of flames, but because we couldn’t see much and we had to go fast enough to stay ahead of the fire.”

Aitken and her husband are now home safe in Vancouver.

However, many British Columbians in the interior are still feeling the effects of the wildfire. Connor Holloway, a butcher who works by Cannon Lake, is currently on evacuation alert 35 minutes away from the Gustafsen fire. 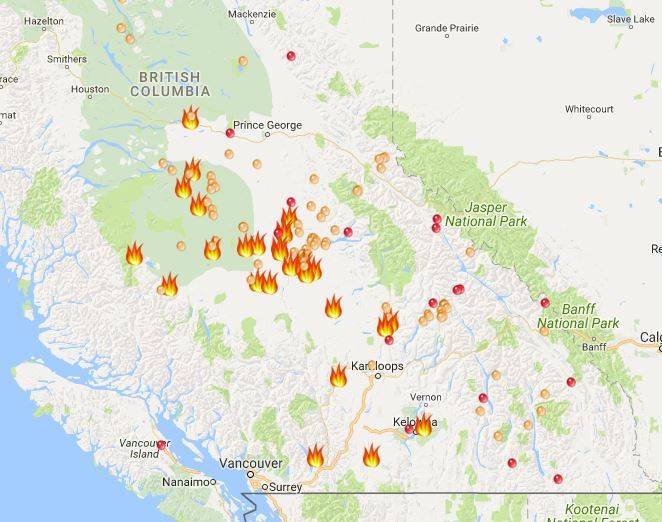 According to Global News, this maps the current locations of active wildfires as of July 17 at 5:30 a.m. Global News

“Everybody is kind of in a state of panic,” he said. “We ran out of gas at our little corner store, and because 100 Mile is actually evacuated, there’s no place to get food or animal feed or gas besides small corner stores in the country here.”

Smoke hovers over the area where Holloway lives, but he did manage to get a glimpse of a wildfire itself a few days ago.

“I saw a big plume of smoke and flames,” he said. “It was pretty crazy.”

For those at UBC who have been seriously affected by the wildfires, UBC Enrolment Services has announced that they are willing to provide financial support.

“If they’re in a financial hardship situation as a result of the wildfires — which are extenuating circumstances that go beyond students’ control — we’re happy to provide emergency funding or anything that’s similar to that in order to make sure that they’re able to be successful when they return to school in September,” said Associate Register Darran Fernandez.

Fernandez also said that he has so far received “about a handful” of students requesting aid. He expects this number to increase following a campus-wide e-mail sent out by UBC Enrolment Services promoting their service.

Likewise, UBC Okanagan has announced that they are offering accommodations in the student residences to those who have been affected by the wildfires.

However, a more significant share of UBC students are feeling the effects of the fires in less intense ways. For instance, third-year psychology student Alexandra Dann had to evacuate 12 horses from her family’s ranch in the British Lake area near 100 Mile House.

“We started getting boxed in by two fires that were in Little Fort, which is on one side of highway 24, and then 100 Mile is on the other side,” she said. “We’re right in the middle.”

Dann managed to find a volunteer to house the horses through a Facebook group dedicated to helping people’s animals evacuate from dangerous areas.

“People were volunteering to haul horses and other livestock, and other people were putting up their properties. It ended up being a huge outlet for people to use, like in order to move their livestock,” she said.

For others like recent graduate Dustin Patara, they are less worried about their personal safety and more about the businesses they had to leave behind. Prior to his evacuation to Kamloops, Patara was working as a manager at one of his family’s motels near 100 Mile House.

“My parents are very stressed out because [the motel]’s our livelihood,” he said. “They’ve been operating there for about 20 years.”

He added that their employees are also concerned.

“They’re more stressed out because they live in the area. One of our managers, for example, she actually lived in the 108 [Mile House community], and as far as I know her house has likely burnt down. So lot of our employees are very stressed out, and during the evacuation it was very rough for them.”

Further south, fourth-year political science student Ty Yamamoto was working as a councillor at Rockridge Canyon Camp near Princeton when an evacuation announcement required him to help evacuate 400 kids. The fire in Princeton also affected second-year LFS student Lexi Patton, as her family had to evacuate from their cabin by Missezula lake. 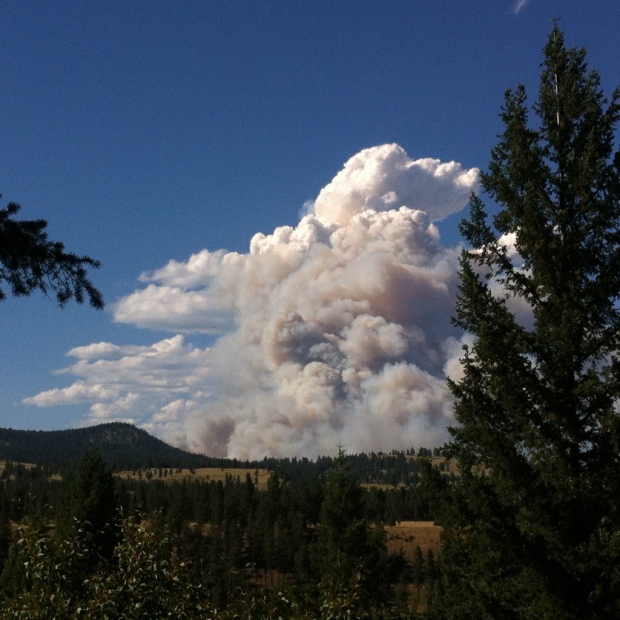 According to CBC, this wildfire is about 10 km north of Princeton. Kathy Simpkins/CBC

“The power went out, so they were relying on communication from police and firefighters literally showing up at the door,” said Patton. “They basically showed up sometime last week and said ‘Ok, you all need to have all your stuff packed, you could be evacuated at any moment.’ So they were just living in the living room wondering when they were going to have to leave.

“So it’s a pretty scary situation. And eventually when the firefighters called for evacuation, it was a 2 a.m. escorted evacuation.”

Beside the wildfires, UBC students who are currently living in the interior also have to face the smoke clouds that hover in the sky and pollute the air.

“There’s smoke that hangs over the mountains that makes them not even visible, and that’s pretty surprising because we live in a valley,” said Gjalen Heer, a third-year integrated sciences student currently residing in Kamloops. “It looks like thick fog hanging over the city.”

Since it has also strongly deteriorated the air quality in the city, residents are told to avoid being outdoors. Heer has asthma, so it’s particularly tough for him.

“It just made it difficult to go outside at all,” he said. “I mostly get around on my bike, so I couldn’t really leave the house as much.”

For comparison: Photos of #Kamloops from Monday and today. Taken from same place. pic.twitter.com/LdOGpJqIUk

Could it happen again?

According to Aitken, intense fire seasons like these are going to become more common because BC’s summer is becoming increasingly hotter.

“This is an exceptional year, but we’re going to have more and more years that are exceptional compared to the past,” she said. “So it’s really important that we realize that we’ve got to start proactively managing around wildfires more, reducing the amount of fuel and doing controlled burns — so using fire as a tool against fire.”

When asked if these wildfires were a result of climate change, Aitken explained that although you can’t attribute any one event to climate change, the predictions in the upcoming changes in climate are certainly linked to longer and more severe fire seasons.

“We expect these types of fires to be increasing as a result of climate change. That would be a fair statement, not attributing this one event — although I think that is in fact what’s driving it, our exceptionally warm Junes.”

An earlier version of this article misspelled Darran Fernandez’s name. The Ubyssey regrets this error.