Beyond #MeToo: UBC hosts panel on rape culture and gender disparities in leadership 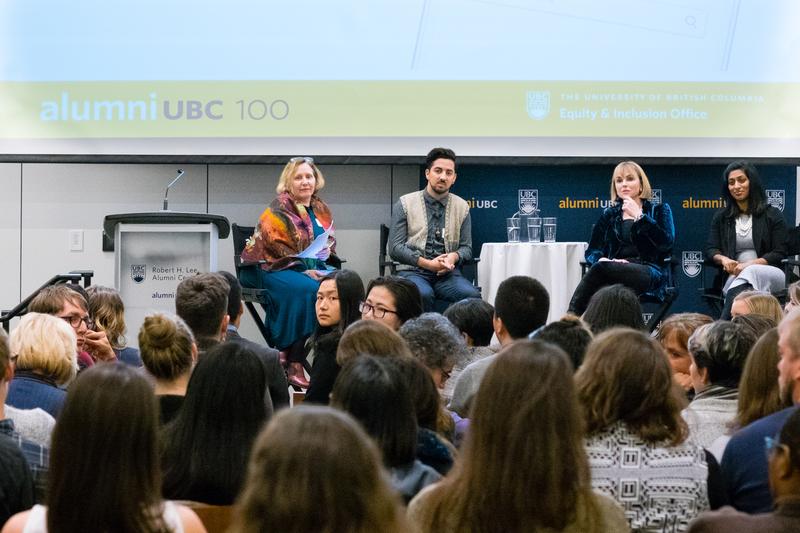 Alumni UBC and the Equity and Inclusion Office hosted a discussion panel on Tuesday evening that centred around sexual misconduct and harassment, campus rape culture and gender disparities in academia and executive leadership.

In response to #MeToo, a social media campaign where survivors were invited to share their stories in order to increase awareness of the prevalence of sexual assault, the panel aimed to take the discussion from the internet to the real world and from awareness to change and solutions-based thinking.

Moderated by UBC VP Equity and Inclusion Sara-Jane Finlay, the panel featured Fiona Macfarlane, managing partner and chief inclusiveness officer at Ernst & Young and a member of UBC’s Board of Governors; Chantelle Krish, director of communications and advocacy at YWCA Vancouver; Dr. Jennifer Berdahl, professor of leadership studies researching women and diversity at the Sauder School of Business; and Ryan Avola, program manager at iGuy — an educational program for young boys that aims to teach healthier masculinities.

Finlay noted the importance of creating a venue at UBC, and at educational institutions in general, where these conversations can be had openly and productively.

“I feel that we have a responsibility now to do something — whether that is on a campus or in any kind of workplace. People come here to work, study and live ... and we have to be sure we’re providing an environment in which they can do that work,” she said. “Having an opportunity for these discussions, keeping the topic relevant and live, I think is really key to doing that.”

Finlay jumped right into the thick of the topic with the first question, asking the panelists, “Why does gender inequity still exist in the workplace, and how does this inequity contribute to gendered harassment?”

In response several panelists highlighted the prevalence of tiny displays of gendered conduct, which contribute to harmful work cultures when put together.

Berdahl: most sexual harassment isn't Weinstein-style; it's the unwelcome environment, created by comments, jokes, unwelcome comparisons, you name it. That spurns from the fact that the workplace was designed by men, for men. #BeyondMeToo

Finlay then asked what the panelists thought about the online campaigning and social media activism on these issues, and what the response did and should look like.

Krish underscored “strength in numbers” and the power in being heard and supported by allies and fellow survivors. She also said she thinks authentic acknowledgement and apology are crucial.

Avola echoed the positive feelings towards campaigns like #MeToo and #IWill — the response hashtag where men shared what they would do to stop sexual harassment and assault — but noted that he wants to see “men engage in those conversations off the internet and beyond the hashtag, much like this panel.” Later on, he suggested the creation of more venues in which men can confront the difficult reality of their own contributions to rape culture and hold each other accountable in safe spaces.

Q: What more could we be doing to hold harassers accountable?
Avola: Holding venues where men can get together, share the ways that these behaviours are impacting all of us and hold each other accountable in a safe space — learning what that looks like. #BeyondMeToo

When asked by the audience if these conversations should focus exclusively on women’s stories, Berdahl said no. Instead she emphasized the experiences of all genders, including men, as being important in understanding workplace power imbalances.

“These are toxic organizational cultures,” she said. “Nobody is thriving.”

Another audience question from a student expressed her fear of, given her gender, graduating and entering a workforce that might be unwelcoming and unappreciative of her academic accomplishments, and asked how she might approach that. Macfarlane said it is important, in her view, to pick a job or organization that aligns with values that one wants to emulate, even if that means searching for a little longer.

Macfarlane's advice to scared women/minorities entering the workforce: pick an organization with the values you want to work in — for now, unfortunately, only some will be good enough for you. #BeyondMeToo

In interviews following the panel, Finlay and Berdahl said they felt it went well and furthered some valuable discussion points. It is Finlay’s hope that an event like this might help to empower campus community members to unite against rape culture and inequity at UBC in their everyday lives.

“Students should feel empowered and [that] their voice is incredibly important on campus,” she said. “Challenging when they see people behaving inappropriately, whether that [be] their peer or their professor ... and feeling empowered to be able to do that, knowing that there are policies and frameworks and offices like mine [Equity and Inclusion] behind them to support them.”

Looking forward, both women feel that UBC has been making considerable efforts towards total equity, but that there is a continual need for these discussions and the initiatives to back them up.

Berdahl, who has been at UBC for three years, felt silenced by university administration when she said her academic freedom was threatened over a 2015 blog post, which muses about the reason behind former President Arvind Gupta’s sudden resignation.

“When I first got here it seemed like people were very clueless, even about what sexual harassment was, let alone how to handle it ... I think [Finlay] and others are really working hard to increase awareness and dialogue and accountability, and streamline the process so that it’s managed better,” said said.

“It is a tricky problem, but I think that there’s real effort going into it.”

Finlay acknowledged the promise that she thinks is encapsulated in the current steps being taken at the university, for instance the creation of the new sexual misconduct policy that was put into effect this past May.

“Also, I think in terms of the leadership and the kind of statements that they are making, what they are modelling about what is acceptable and what is not acceptable, really gives me hope that we are seeing change and that things will improve for people who feel they are suffering from harassment and discrimination,” she said.

Berhdal also sounded hopeful when asked about the progress that has been made at UBC.

“I don’t feel silenced. Not anymore. Maybe ignored by some, but not silenced,” she said.