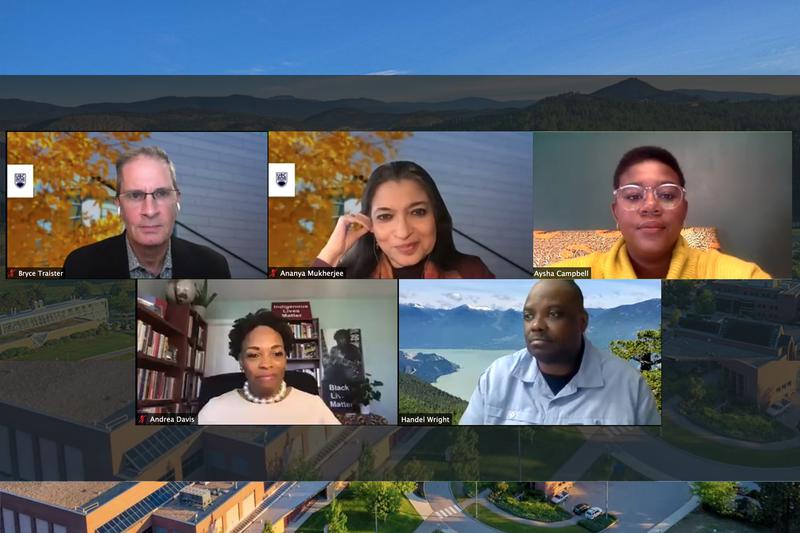 Both professors pointed to Black studies as a site of resistance. Jasmine Foong

Davis, an associate professor in the department of humanities at York University, and Wright, a professor in the UBC department of educational studies, spoke about the possibilities of Black studies programs at a UBC Okanagan-hosted panel on October 23. UBCO Provost Ananya Mukherjee-Reed gave opening and closing remarks, with Dean Bryce Traister of the UBCO Faculty of Creative and Critical Studies moderating.

Black studies is distinct from African studies or its relatives including Africana studies or diaspora studies, Davis explained.

Where past iterations of area studies focused on regions like the Caribbean or the African continent itself, many students today are later-generation Black Canadians who want to learn about the contemporary Black experience.

Both professors pointed to Black studies as a site of resistance.

Student-led activism after the deaths of Martin Luther King Jr and Malcolm X in the United States spurred American colleges to establish the first Black programs. With the Black Lives Matter movement rising in the past decade, students are calling for Black studies programs with renewed vigour as Canadian racism persists at the post-secondary level.

“The intellectual impetus for Black studies in Canada is not dissimilar from its historical origins south of the border,” Davis said. “2020 is the new 1968.”

While Davis’s home of York University has a Black Canadian studies certificate program, UBC established an African studies minor in the Faculty of Arts in 2005 in response to student activism. Aysha Campbell, a student in the York certificate program, highlighted the opportunities for experiential learning. But neither university has dedicated undergraduate or graduate Black studies programs.

There are two approaches those advocating the creation of a Black studies program can take: the first option is to request a program from administration with the risk of work ending after the university creates a small program. The other option — and, to Wright, the better — was to use activism to design programs from the ground up and bring it to administrators.

Even after establishment, Davis said that Black studies programs, as with other minority studies programs, often face pressure to prove their usefulness to university leadership. Programs can fall into what Wright called a “Catch-22” — administration perception that there’s little interest for Black programs leads to low funding, keeping programs small and reducing future demand.

“The problem here is that UBC is starting from the Dark Ages in terms of the very representation of Blackness.”

“The problem here is that UBC is starting from the Dark Ages in terms of the very representation of Blackness,” said Wright. “Underrepresentation is acute enough that Black people are an absent presence … Black bodies are rendered bodies that do not belong on campus.”

Wright, also director of UBC Centre for Culture, Identity & Education, said in an interview that the creation of a UBC Black studies program hasn’t yet moved past preliminary talks.

He mentioned attending recent UBC administrators’ anti-racism retreats where he said that UBC should transcend anti-racism to actively create space for Black studies.

What both Davis and Wright drove home was that Black studies aren’t tools for institutions to fight racism — they have inherent value in and of themselves.

“We should seize this moment,” said Provost Mukherjee-Reed. “I think the activism of our students will not let us rest.”