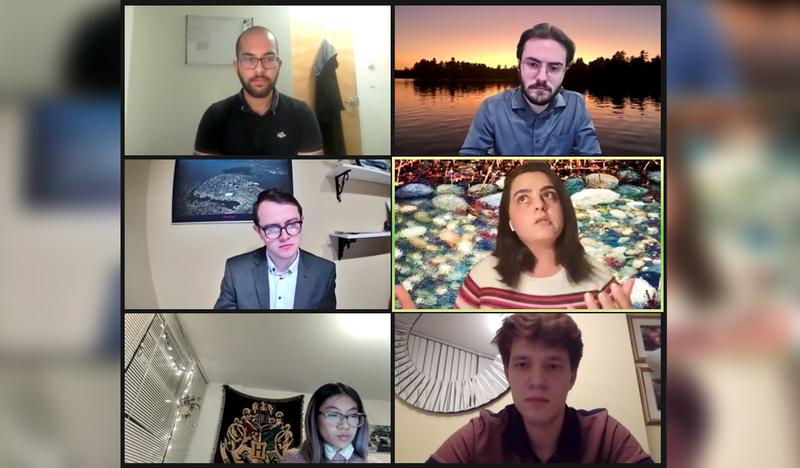 Dante Agosti-Moro, Arezoo Alemzadeh Mehrizi, Max Holmes, Damir Korniiashik and Georgia Yee are bidding for two student seats on the Board of Governors. Screenshot via Zoom

At the first Board of Governors candidates debate, hopefuls overlapped on many platform points but challenged each other on identity and representation.

All the candidates — save Korniiashik — have considerable experience in student governance: Agosti-Moro and Mehrizi in Senate, Yee as AMS VP academic and Holmes as a Board incumbent.

The candidates flexed their knowledge from their respective backgrounds through discussions on anti-racism initiatives, student engagement, tuition increases and the accessibility of student government elections.

Mehrizi, Agosti-Moro and Holmes proposed more expansive hiring of Black academics. Yee argued for a deeper look into how racism exists in leadership and in different levels of the university.

Newcomer Korniiashik lacked some of the specific knowledge that his more experienced counterparts drew from, but emphasized the necessity to consult with, support and uplift Indigenous students more than the rest of the candidates on Zoom.

All candidates emphasized the need for increased online communication with students on what the Board is doing, especially during online learning.

Communication tied into a conversation about the annual rubber stamping of tuition increases. Korniiashik spoke on the need to clearly communicate with students where the tuition increases would be going, if approved by the Board.

Yee, Holmes and Agosti-Moro argued for the creation of a student affordability plan — and the need to push the government to better fund UBC to ease the university’s reliance on tuition, a point Mehrizi echoed.

Agosti-Moro said that while he does not believe the university is justified in raising tuition right now, he stressed the Board’s fiduciary duty to the university.

“We need to be careful when we talk about vehemently opposing tuition increases under any circumstances because governors have a fiduciary and legal duty to do what’s in the best financial interest of the university,” he said.

In the tuition conversation and throughout, incumbent Max Holmes flaunted his two years of experience on BoG, arguing for his place on the basis of continuity and institutional knowledge.

An audience member and other candidates challenged him on that, asking him whether he felt he was taking up too much space in elections after being involved for so many years.

Holmes said he did think there should be more diversity in representation, but highlighted his work in mentorship on Senate in which he served for the past three years.

“If you have two new governors come in … you lose a lot of institutional knowledge, you lose all of the closed conversations that have happened that none of these people have been here for,” Holmes said.

Mehrizi pushed back on Holmes’s statement on the need for continuity, arguing that with a proper transition, all of the candidates would be fully prepared to serve on BoG.

“I think this is a very good point to bring up when we are considering who to vote for and how we’re uplifting new and fresh perspectives at the Board.”

BoG candidates will debate again at the Great Debate on Saturday, February 27. This article is part of our 2021 AMS elections coverage.