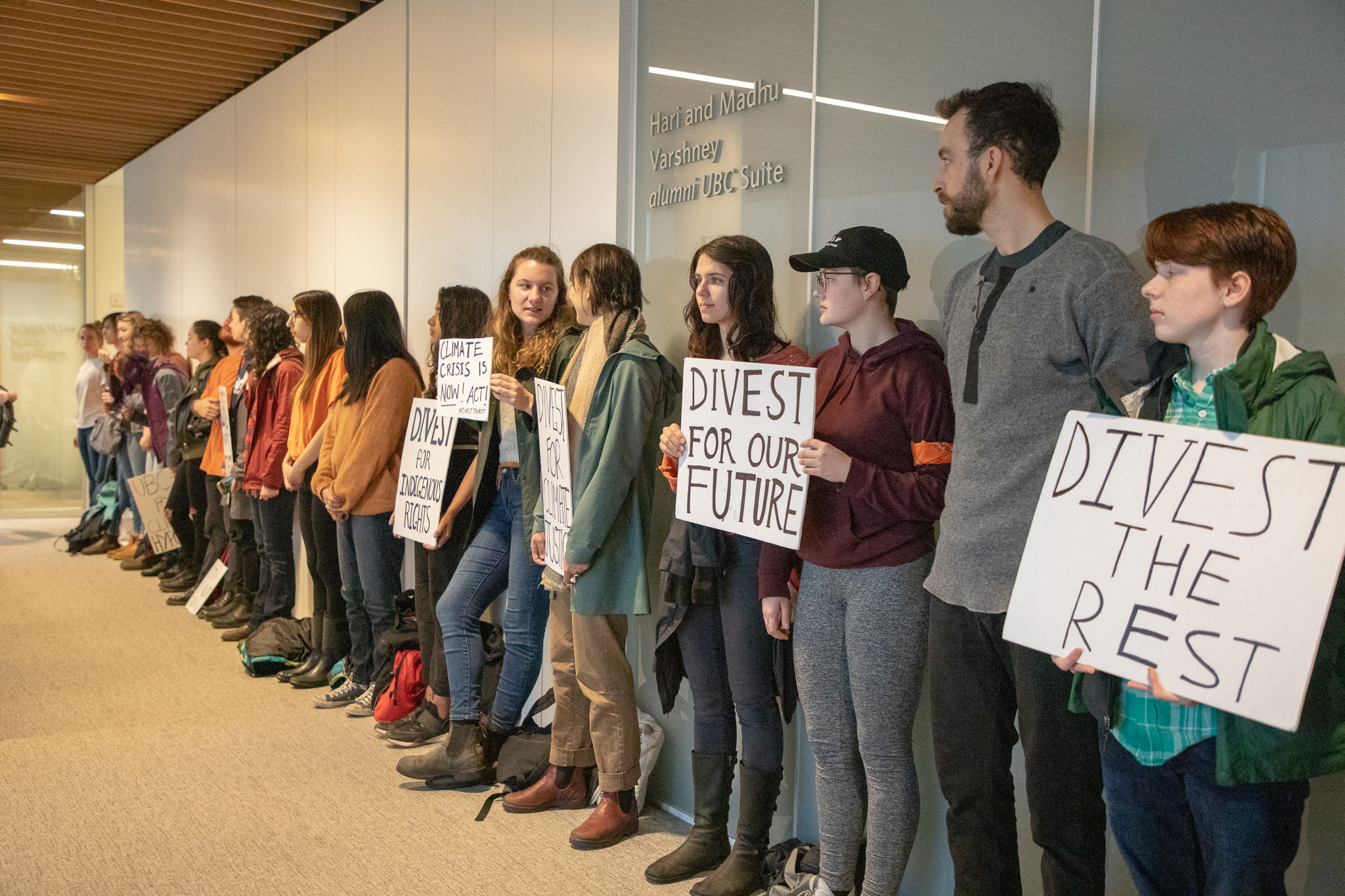 Students demand fossil fuel divestment at Board of Governors meeting

Holding signs that read “Divest For Our Future” and “Climate Crisis is Now! Act!,” student activists from UBCC350 gathered outside a Board of Governors meeting to demonstrate against UBC’s investments in fossil fuels.

Students once again took the issue of fossil fuel divestment to the Board of Governors (BoG).

Holding signs that read “Divest For Our Future” and “Climate Crisis is Now! Act!,” student activists from UBCC350 — a student collective for climate action — gathered outside today’s BoG meeting in the Robert H. Lee Alumni Centre to demonstrate against UBC’s investments in fossil fuels.

“We are the generation that's going to be most impacted by climate change, and we're calling on our university to stand up to defend our future and fulfill its mandate to prepare us for success in this world,” said Kate Hodgson, a UBCC350 coordinator.

UBCC350 first started advocating for divestment over five years ago, but the fight hasn’t been easy.

“Having been met with consistent, consistent rejection, we're here to tell them that we are angry and organized,” said Hodgson.

According to her, the protest comes at a “critical moment” as the Board revisits its Sustainable Futures Pool (SFP). Officially started in 2017, SFP is a pool of low-carbon, environmentally-conscious investments that comprises less than one per cent of UBC’s portfolio.

The BoG also considered divestment in 2016 after students and faculty approved fossil fuel divestment refenda by a large majority, but the governance body concluded the proposal would not meet the goals of addressing climate change.

“As we all know, we are all settled on this land which is Indigenous land and by investing in fossil fuel companies we are actively contributing to destroying this land,” said Chachra. “It's like if someone goes into your home and destroys it and just leaves.” 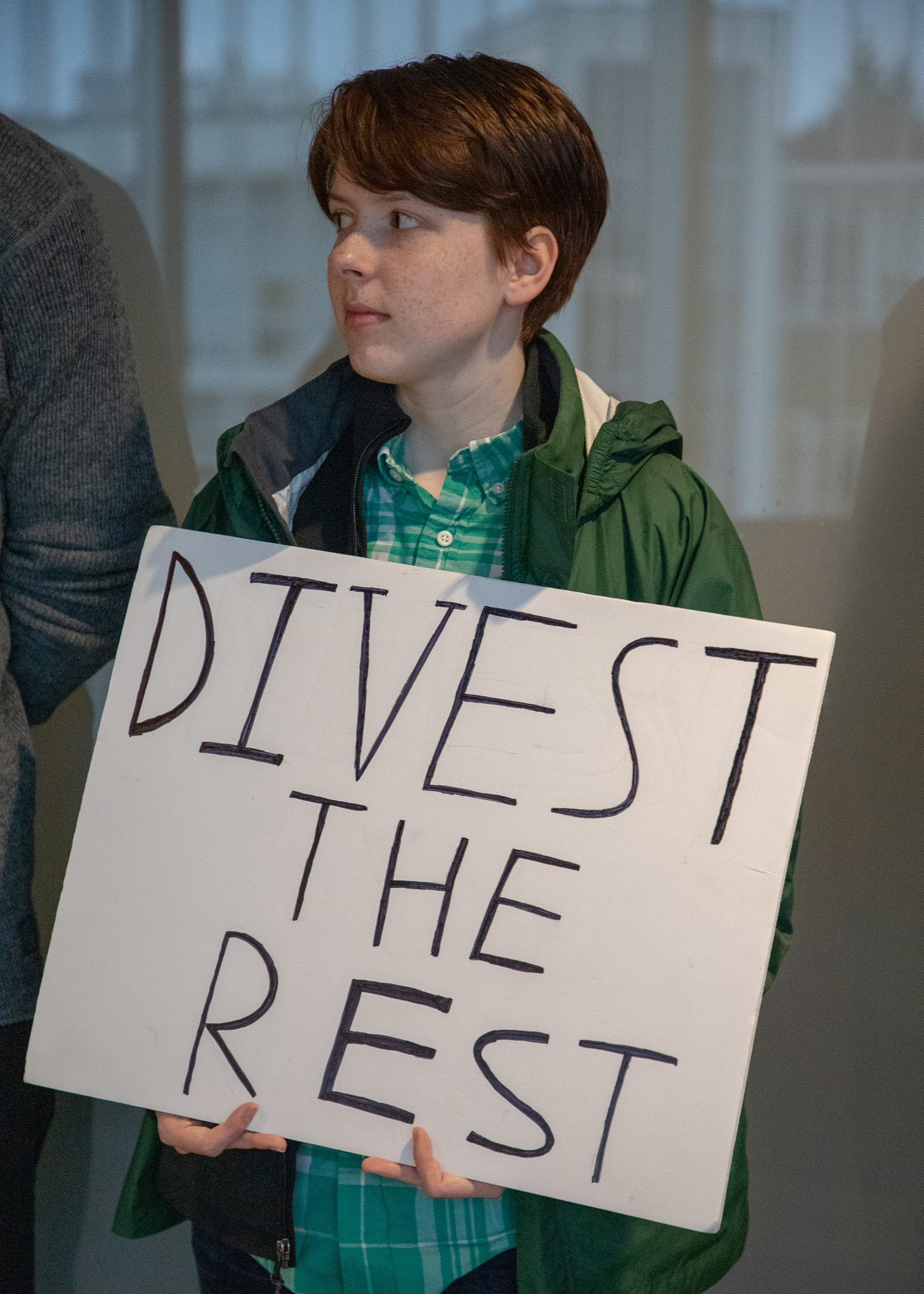 While the meeting was still in closed session, the new VP Students Dr. Ainsley Carry emerged to speak to the protestors. He urged them to talk to him about their concerns and gave out his cell phone number.

“Thank you for joining us this morning. I look forward to whatever presentation you may have, the conversation you want to have,” said Carry, who began his term at UBC this month. “I am here to help you accomplish your goals.”

Hodgson was not impressed.

“Well, you know, we've seen that before,” she said. “We're so grateful for that offer of support, but we'll only trust it if we see it backed with real and firm advocacy on our behalf.”

When the session opened, the students slowly filed into the Robert H. Lee Family Boardroom and stuck their posters on the wall and podium, where they remained for the rest of the meeting.

Board Chair Michael Korenberg referenced the protest as the Board discussed increasing funding to SFP from $25 million to $50 million over the next three fiscal years. The motion was approved.

Faculty Board representative Dr. Charles Menzies said that while this motion is a good start, the governance body must go further to support sustainability.

“... while this is a good thing, we need to deinvest [sic] from pipelines and tar sands, and do more in sustainable investments,” Menzies tweeted.