Hundreds of students light up to celebrate legalization of cannabis 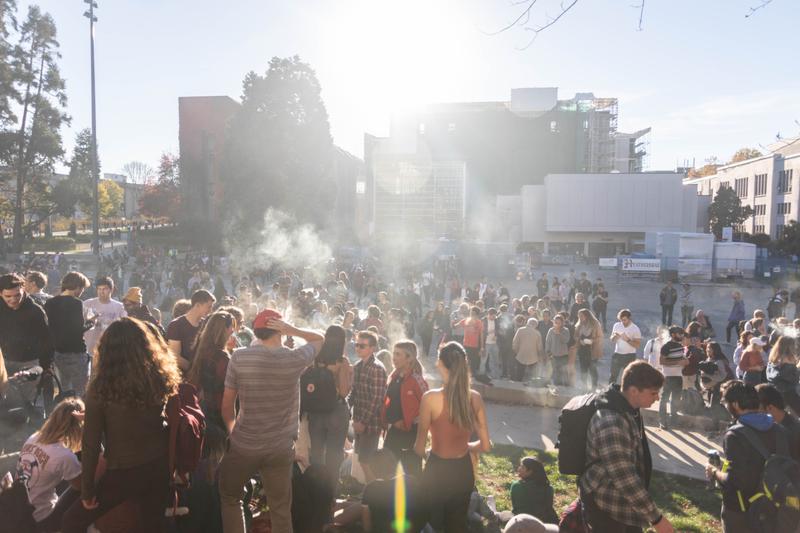 “I have no idea how this happened,” said Natasha, one of the organizers. Saloman Micko Benrimoh

At 4:20 p.m., a massive crowd of students lit up in unison on the Knoll to celebrate the national legalization of cannabis.

Organized by UBC cannabis club Hempology 101, “Legalization Celebrazion” drew a massive crowd of cannabis users and enthusiasts to advocate for social acceptance of cannabis and kick off the end of prohibition.

“I have no idea how this happened,” said Natasha, one of the organizers.

Students interviewed for this article asked that their last names names not be published, pointing out that although cannabis is now legal, it will take time before the personal and legal stigmas associated with its use fade away.

Still, advocates rejoiced that users no longer feel they have to conceal their use.

“I’m just really excited to see that people aren’t getting in trouble for it anymore,” said Eric, a third-year student. “It’s nice to see that a majority of the population can actually do what they wanna do, even though it’s going to take some time to really integrate.”

UBC is one of relatively few Canadian universities adopting a liberal approach to cannabis. At most campuses, including those in provinces like Manitoba that are banning consumption of the drug in public spaces, cannabis is often banned or highly restricted.

While UBC Vancouver’s policy towards cannabis won’t be finalized until February, community members can currently smoke anywhere tobacco is permitted.

“I’m American and to see a whole country completely legalize cannabis, I think it’s a liberal step towards free culture and liberty,” said a second-year student.

Whether it was what was being passed around or the sun, most felt that legalization was off to a good start.

“People worried about being arrested … now that it’s legalized and people know that nothing can happen, they can just be out here,” said Natasha.