At rally on Chinese National Day, students clash over democracy in Hong Kong 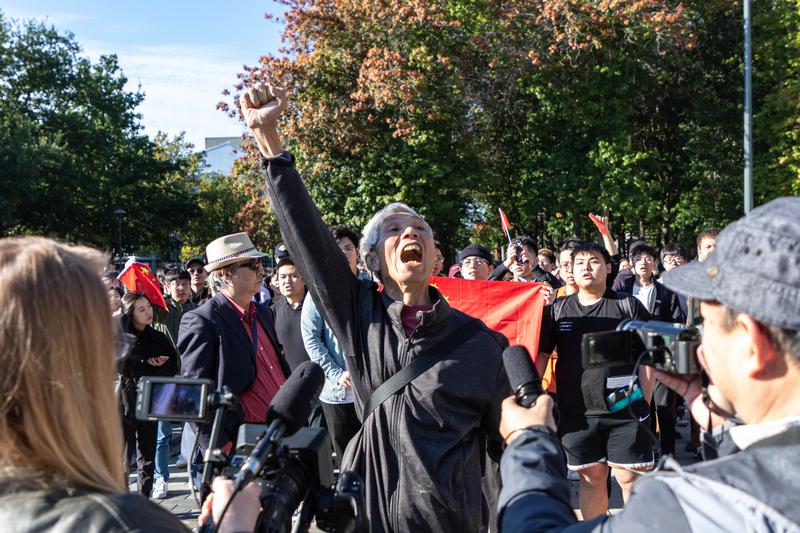 The crowd grew to hundreds as a counter-protest formed and and the two sides competed to chant and sing over each other. Salomon Micko Benrimoh

Tensions about unrest in Hong Kong between pro-Hong Kong and pro-Chinese government protesters boiled over at UBC as China celebrated its 70th anniversary of communist rule.

At 3 p.m. on Tuesday, about 50 students gathered for a rally in solidarity with Hong Kong, wearing protester garb, giving speeches and holding moments of silence. But the crowd grew to hundreds as a counter-protest formed and the two sides competed to chant and sing over each other.

In addition to the rally, students from both sides demonstrated by painting the Cairn, and the AMS protected a Lennon Wall erected by protesters in support of Hong Kong in the Nest. Despite emotions running high and some minor altercations, the day’s protests were largely peaceful and no one was harmed.

“We live in an academic environment where freedom of speech is critically important to a democracy, and the fact that our students could come together and demonstrate in a peaceful way, I think, is important,” said UBC VP Students Ainsley Carry in an interview with The Ubyssey. “No matter what side they stand on, we're here to support our students and their ability to speak freely.”

Demonstrations in Hong Kong originally began in opposition to a February bill that would enable China to extradite alleged criminals from Hong Kong, Taiwan and other regions to mainland China for trial. Protesters worried that the extradition bill could allow the Chinese government to prosecute political dissenters.

But after a summer of clashes between protesters and police, the extradition bill was withdrawn by Hong Kong Chief Executive Carrie Lam in early September. Still, demonstrations persist under the slogan “Five demands, not one less,” with the other demands including an independent investigation into police brutality; characterizing the demonstrations as protests, not riots; the pardon of imprisoned protesters and a transition to universal suffrage.

The unrest took on an air of significance as China celebrated its 70th National Day, an event that commemorates the establishment of the People's Republic of China (PRC) on October 1, 1949. While parades took place across China, including a display of military might in Beijing, brawls broke out between demonstrators and protesters in Hong Kong.

Marking the first time police fired live rounds at protesters, a high school student was shot in the chest as he and other protesters chased police while brandishing what appear to be metal rods. The student, who is hospitalized but in stable condition, quickly became a symbol of the democratic cause in Hong Kong.

“That kid was only [18]-years-old, and he has a bullet in his chest, three inches from his heart.” said William, a UBC protester from Hong Kong whose name has been changed in this article to ensure his and his family's safety. “It was just so sad that the police force who are supposed to protect the people just fired someone at his chest and almost killed him. That was murder.” 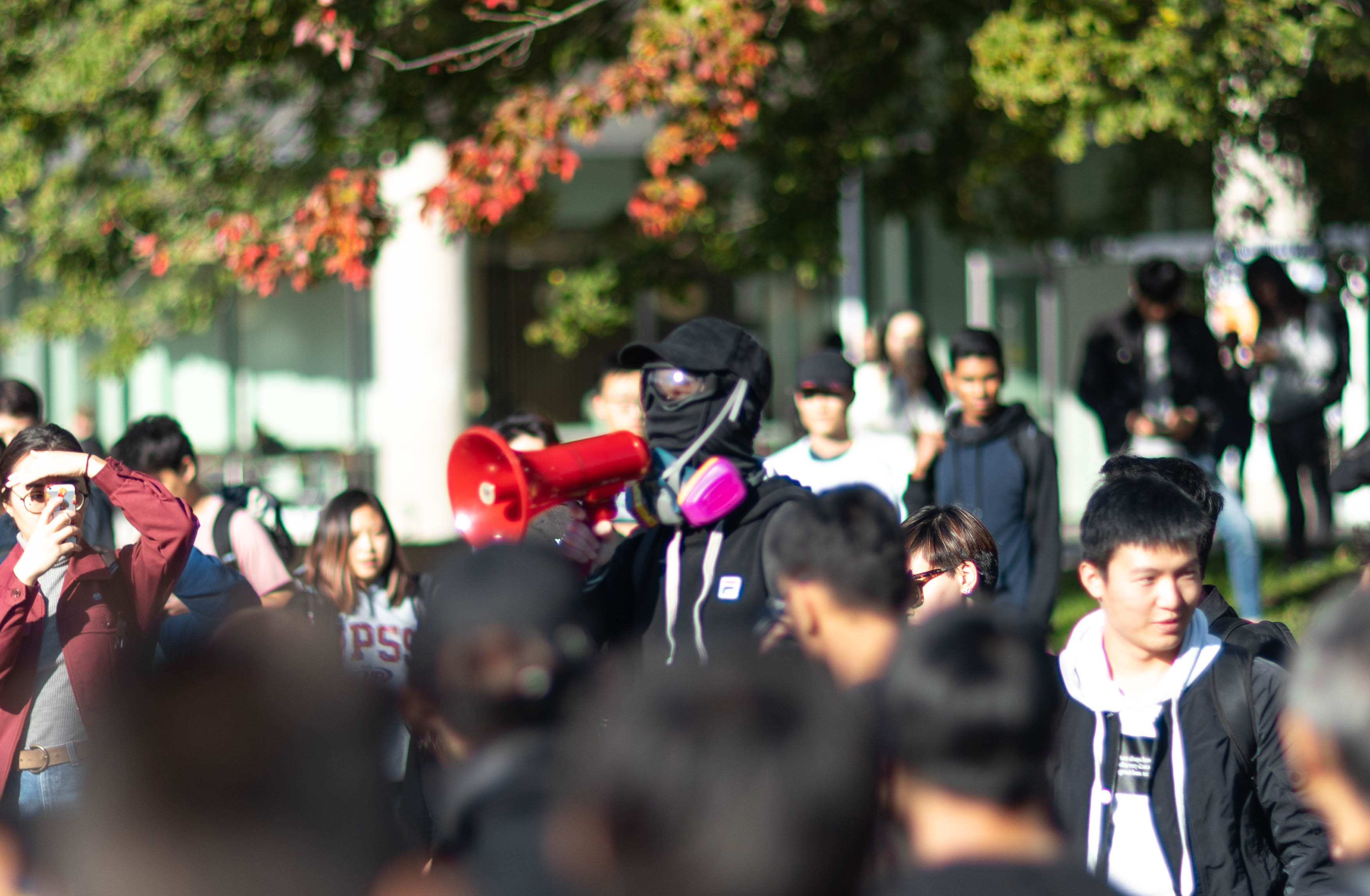 Black bloc is designed to protect protesters’ bodies and identities and consists of black clothing, masks and goggles to deter tear gas and construction or motorcycle helmets. Salomon Micko Benrimoh

The rally began at the foot of the Knoll, where the recently-created organizing group UBC The Enlightenment of Hong Kong (EHK) displayed banners, shared speeches about their cause and held a moment of silence for the shot protester and others who have been arrested or injured.

William, one of EHK’s leaders, and other members observed what he called “an official dress code of protesters in Hong Kong” called ‘black bloc.’ He explained that the garb is designed to protect protesters’ bodies and identities and consists of black clothing, masks and goggles to deter tear gas and construction or motorcycle helmets.

While anonymity is a concern for many pro-Hong Kong students who fear government surveillance because they live or have family in China, William said that they black blocked primarily as a symbol of support for their counterparts in Hong Kong.

“[Surveillance] is a concern, but because we are having a peaceful protest here ... and we are only fighting for our dignity and rights, we are not [too] concerned,” said WIlliam. “The reason why I do black blocking today is… to show our support and solidarity to Hong Kong people that we are in line with them.”

Before long, a group of pro-Chinese government students gathered on the north side of the plaza near the Bosque. Both groups donned signs and flags in support of their respective sides.

Though the pro-Chinese government crowd remained smaller than the pro-Hong Kong group, they rivalled each other in volume as they exchanged chants and sang renditions of their respective anthems.

Most chants were in dialects of Chinese but one that recurred in English saw the pro-Chinese government side of the protest yell “one country” and the pro-Hong Kong side, “two-systems,” making reference to Hong Kong’s special administrative status that has been in place since its handover from British colonial rule to Chinese rule in 1997.

Yulin Hu, a third-year geography student from China, said he supported EHK’s right to protest, but their rhetoric against Chinese people had crossed the line between civil discourse and hate speech.

“If you just say you’re supporting Hong Kong or whatever, it's okay to do that and go for it … But if you're creating hate, like saying we should go to hell as well — that slogan — [then] of course, we’ll get angry about it,” said Hu. “Like, why do I need to go to hell, because I was studying here [while being] Chinese?”

Hu added that when he was laid over in Hong Kong over the summer, he witnessed the protests firsthand and didn’t feel they were peaceful.

Before long, a group of pro-Chinese government students gathered on the north side of the plaza near the Bosque. Salomon Micko Benrimoh

“It’s chaos,” said Hu, “I wasn't able to get out of the airport because those protesters, they blocked the roads. And I guess they threw something, maybe a bike, on the rail and caused a train to slip up. That's pretty bad.”

About 30 minutes into the protest, pro-Hong Kong demonstrators began to inscribe messages and images of umbrellas in chalk throughout different parts of the plaza, alluding to the 2014 Umbrella Movement in Hong Kong.

Protesters from the pro-government side proceeded to wash away the messages and drawings by spraying them with water bottles. In one instance a pro-Chinese government protester spilled water onto the lower body of an older man from the pro-Hong Kong side, spurring members from both crowds to advance towards each other.

Some pro-Chinese government protesters continued marching through the opposing area with a PRC flag, getting into scuffles with opposing demonstrators and giving the event it’s first real instance of unpeaceful behaviour.

By this time, University RCMP officers had arrived, and they approached one pro-government student who had swung at an opposing protester. He was not detained but spoke to the RCMP officers at length.

When contacted by The Ubyssey, RCMP said they did not have any information to share about the incident or the safety of the event as a whole.

Despite the momentary flare-up, the rally deescalated shortly afterwards. By 6 p.m., the crowds had dispersed.

A full day of activism 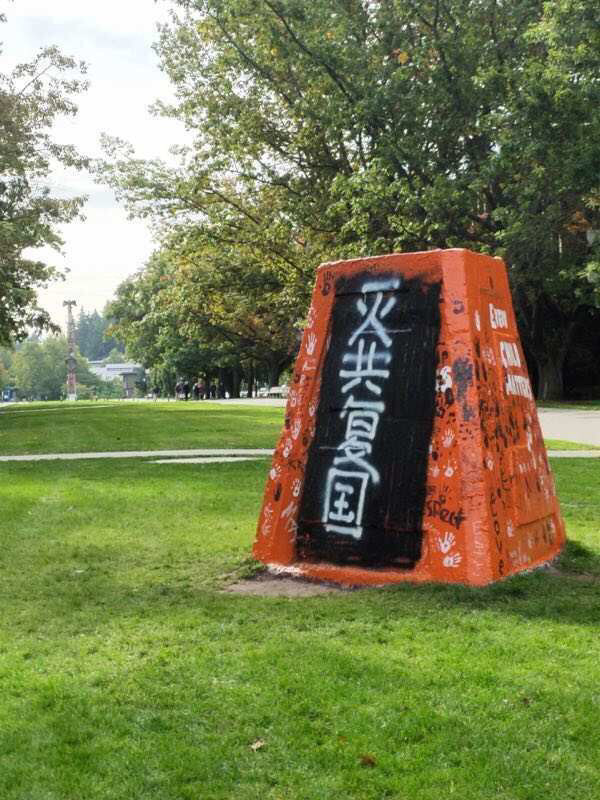 The rally was not the only form of activism on campus yesterday.

Earlier in the day, the Engineers' Cairn had been repainted with the message “Destroy the communist regime. Recover our land.” in Chinese. But not long after, a group of pro-Chinese government students repainted it to read, when translated, “One China.”

According to one Chinese student who wished to remain anonymous, repainting the Cairn was about showing respect for his country.

“[The anti-China message] hurts me. Especially today, it’s my mother country’s 70th birthday ... I don’t want to see this, so I bought my paint, and I came here and covered it,” said the student.

When asked if he was acting on behalf of a student group or any other campus leader, he added, “No leaders. You can say our leader is the communist party.” 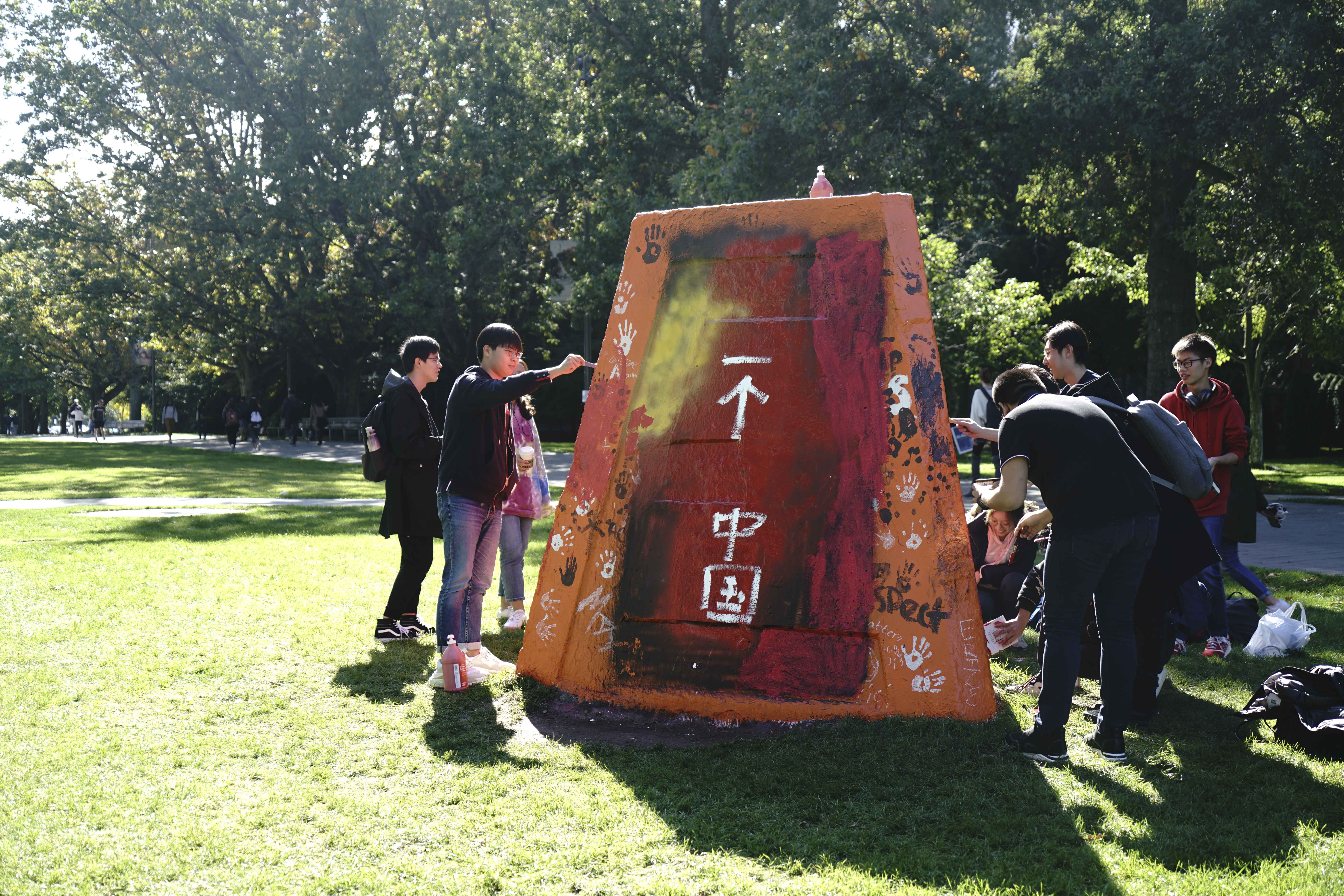 According to one student, repainting the Cairn was about showing respect for his country. Ubyssey Staff

A representative from the Engineering Undergraduate Society (EUS), which oversees the Cairn and its decoration, approached the pro-Chinese government students while they were painting to ask them to leave, but they refused. The representative painted over parts of their message himself before leaving to return with more EUS representatives.

UBC Campus Security happened to be in the area as the altercation occurred, and they approached the Cairn to talk to the pro-Chinese government students. The students left shortly after.

According to EUS VP Spirit Gillian Chiu, the EUS’s decision repaint the Cairn wasn’t about taking sides in the debate over Hong Kong, but about preventing unsanctioned messaging.

“I don’t particularly understand [the messages] at all. I just see something on the Cairn that isn’t really supposed to be there, that isn’t red and white, and I take action against that,” said EUS VP Spirit Gillian Chiu. “The Cairn is not a white board for anyone’s political opinion no matter what it is.”

Unlike the EUS, the AMS is not hesitating to take sides. 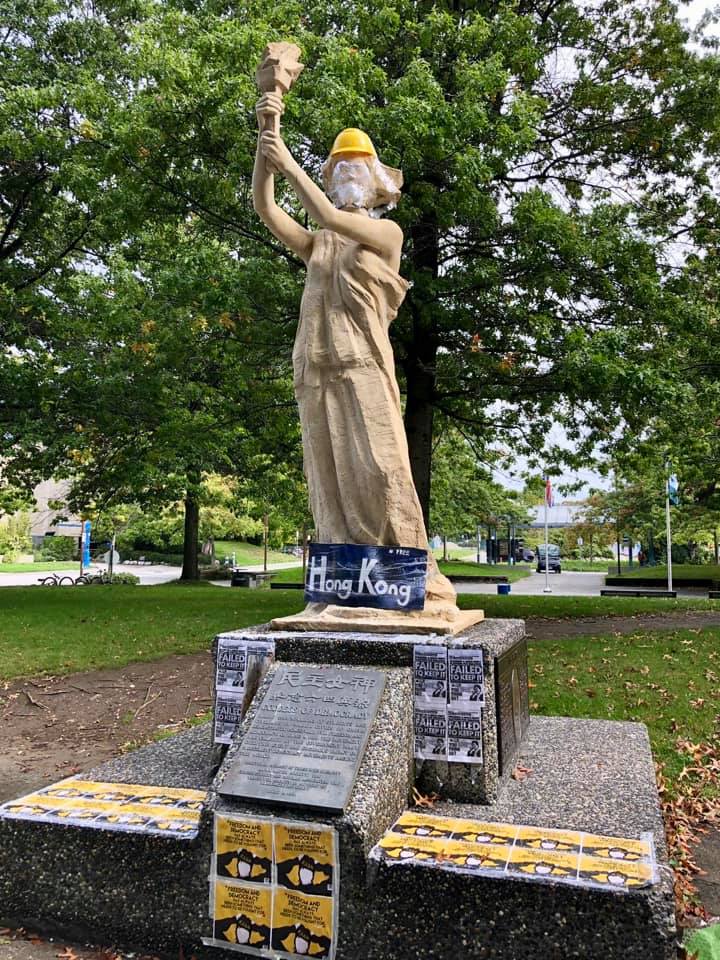 The AMS allowed EHK to decorate the Lonely Goddess statue with protester gear and pro-democracy posters. Courtesy UBC The Enlightenment of Hong Kong

Earlier in September, they allowed EHK to decorate the Lonely Goddess statue — which was built in memory of the Tiananmen Square massacre — with protester gear and pro-democracy posters. The decorations were taken down not long after.

“We reaffirm our commitments made at the Tiananmen Square 30 Year Commemoration towards an open democracy and the ability to protest,” said AMS President Chris Hakim in a statement to The Ubyssey. “And we hope that students will respect this right and engage in a meaningful and respectful manner.

After the rally Tuesday evening, protesters walked into the Nest and set up a Lennon Wall, a wall of sticky notes expressing support for Hong Kong. Because past efforts to create walls around campus had been vandalized or taken down, the AMS promised to protect the wall with 24-hour video surveillance.

“Any unauthorized removal, tampering, or vandalism with this installation by any person may result in disciplinary action including but not limited to a suspension or permanent expulsion from the AMS Nest …,” wrote VP Administration Cole Evans on a letter posted next to the Lennon Wall.

Pro-Chinese government students tore down some of the messages a few hours later, but they were asked to leave by an AMS employee. The notes were re-posted, crinkles and all.

—With files from James Vogl