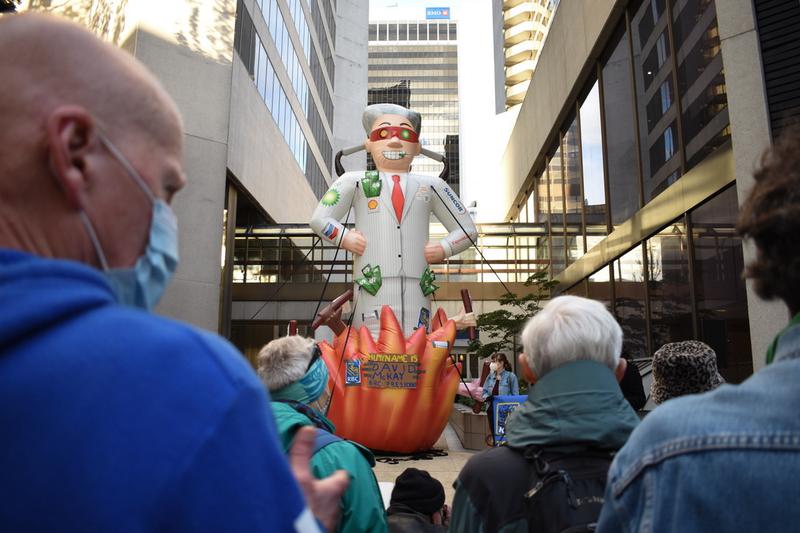 The protest organized by CJUBC comes at a time when the bank remains the fifth largest funder of fossil fuel in the world — the largest in Canada. Lalaine Alindogan

In the late afternoon on October 29, protestors flooded the areas around RBC Royal Centre downtown. They demanded accountability for the company’s billion-dollar investments into the fossil fuel industry — an end to pipeline construction and a definitive call, in their words, to “defund climate chaos.”

The event was organized by Climate Justice UBC (CJUBC) alongside Sustainabiliteens. It featured a speech from Severn Suzuki, music and an inflatable David McKay, CEO of RBC, receiving a string of ironic awards which rang out through the Financial District.

“This is an ironic awards ceremony,” said one organizer, ahead of the first of five accolades given on that day. “These five awards highlight RBC’s biggest and worst impacts on communities and the land through their financing of colonial resource extracting projects.”

Where the company had viewed his actions as economic, in the eyes of the demonstrators, McKay’s decision to fund the Coastal GasLink and Line 3 pipelines was only viewed as exponential growth towards consequences of the climate crisis. 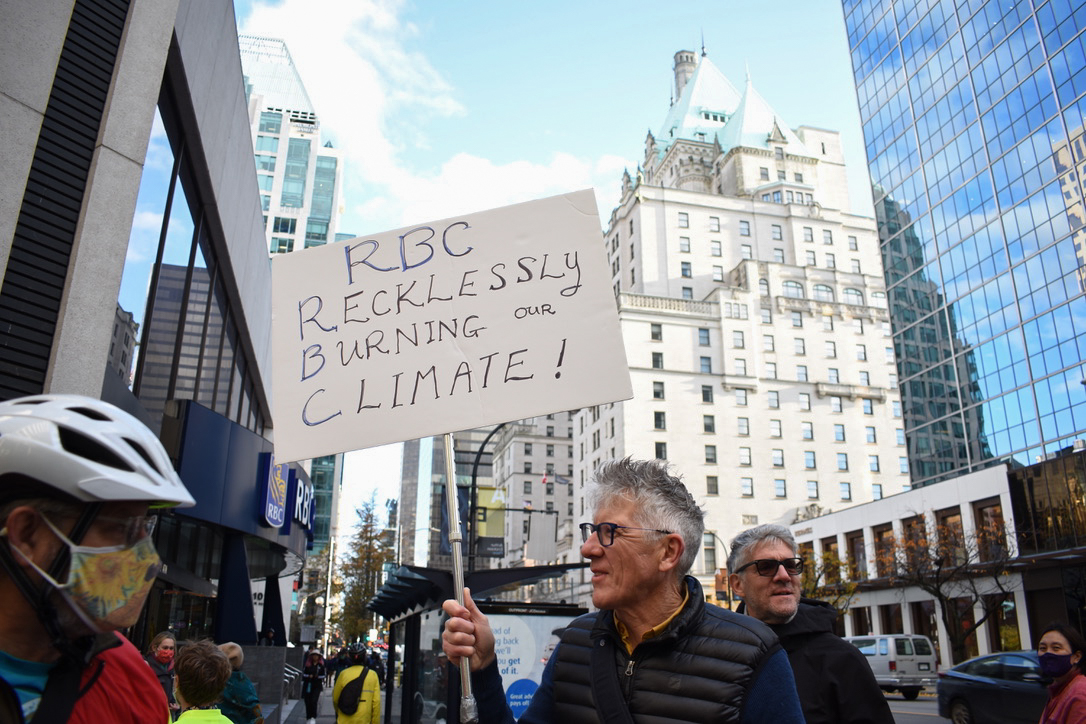 The protest organized by CJUBC comes at a time when the bank remains the fifth largest funder of fossil fuels in the world — and the largest in Canada.

‘The event also emphasized the threat to Indigenous communities by RBC’s funding of these pipeline expansions.

“Basically the pipeline is an energy corridor going through two Indigenous rivers. It is some of the only untouched area left in their land,” said the lead organizer of the protest, Arshia Uppal. “Part of our goal is to spread awareness to that and call on RBC to step back.” 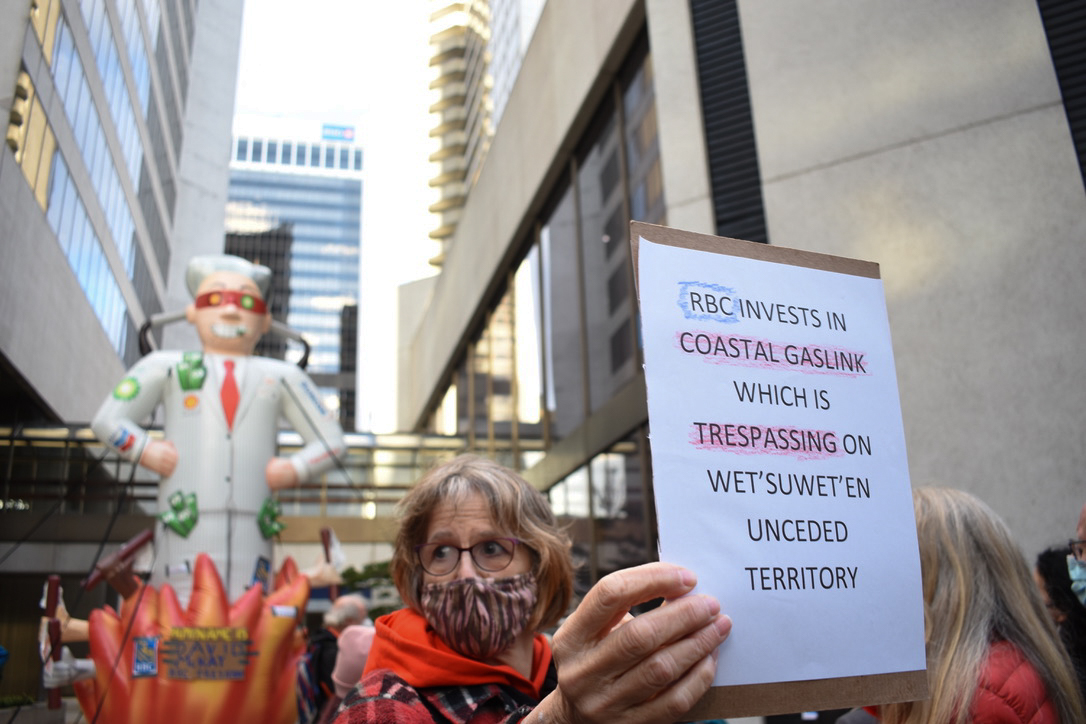 “It’s about making clear to the public that climate change is a very intersectional issue,” Uppal of CJUBC said. “It includes decolonization and anti-racism and everything.”

Wet’suwet’en land defenders from the Gidimt’en Checkpoint have already faced localized harassment for defying the RCMP. To Esmé Decker, one of the organizers, these are decisions which endanger the community as well as the land.

“A lot of violence happens especially when eyes are not on land defenders,” she said. “That’s what the RCMP depends on…So that’s why it’s really important for settlers to stand in solidarity and keep their eyes on what’s happening on the ground.” 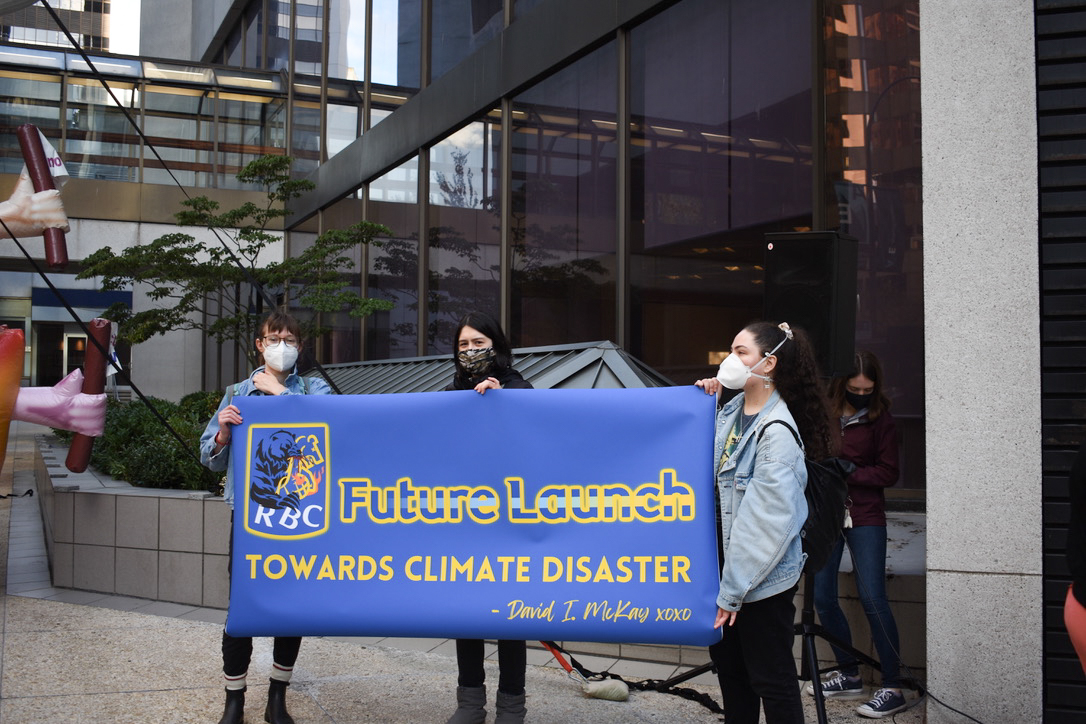 One protester on the ground said he disagreed with focusing on the sole polluter.

“You can get a CEO of the worst company there is to resign or be launched off to the moon. But there are a hundred [CEOs]...waiting in the wings who would love to take that place. And who would love to, in many cases, do things just as bad or worse.”

With the protest, Climate Justice UBC hoped to organize ahead of the UN climate conference in Glasgow (COP26) on November 1, and urge RBC to correct its practices ahead of the event.

A response has yet to arrive. But silence has not stopped activists like Decker.

“David McKay, we want you to think of your children's future and all the people around the world right now being affected by climate change. Put the money where the words are and take that money out of pipeline projects and fossil fuels,” she said.