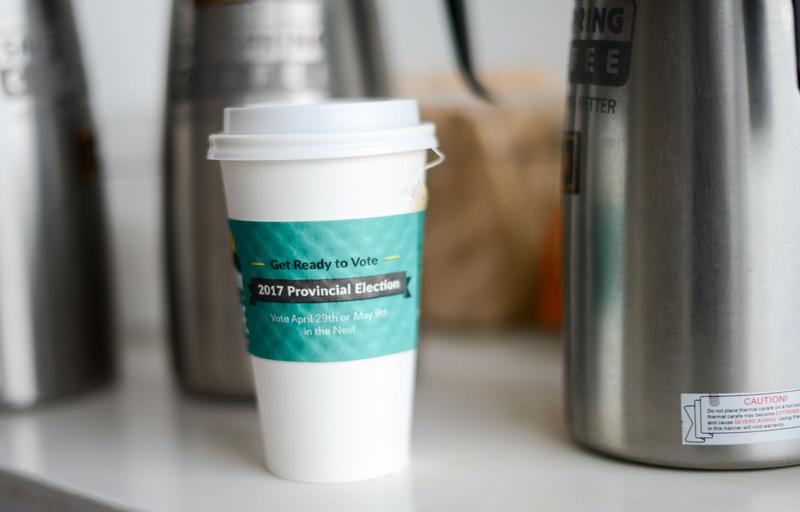 The coffee cup sleeves kick off the start of the boots-on-the-ground style of this particular campaign, headed up by AMS VP External Kathleen Simpson. Starting this week, the AMS will also be distributing flyers as well as coffees in order to get students to start thinking about voting in the provincial elections.

“A lot of our early work on our campaign from the beginning of the year has been focused on letting students know that a lot of the issues that they think of as being student issues are actually provincial issues,” said Simpson.

She names the student loan interest rate, the current two per cent cap on domestic tuition raises and a lot of housing and transit-related issues as examples of this.

Coffee cup sleeves are a strategy that the AMS has used before. Last September, they ran another campaign focused on pushing changes to the draft sexual assault policy at the time and used coffee cup sleeves to draw attention to it.

The campaign is off to a solid start, but Simpson does still have a few concerns.

“We’re seeing a little more awareness of the fact that the provincial elections are coming up, but still the biggest concern that we have right now is that the timing is just really poor for students. A lot of students will have finished exams and are in the middle of moving during that time,” said Simpson.

General voting is on May 9, but Elections BC will also be holding an early voting session in the Nest on April 29 for students who will be off-campus after exams end. Early voter registration by phone and online closes on April 11.

The voter turnout of eligible UBC students in the last federal election was about 68 per cent. This time, Simpson hopes to hit 70 per cent — a goal that she acknowledges will be “a hard push,” but not impossible.

“Get ready to vote,” the sleeves read.

A previous version of this article said that the April 29 event was early registration, not early voting. The Ubyssey regrets this error.