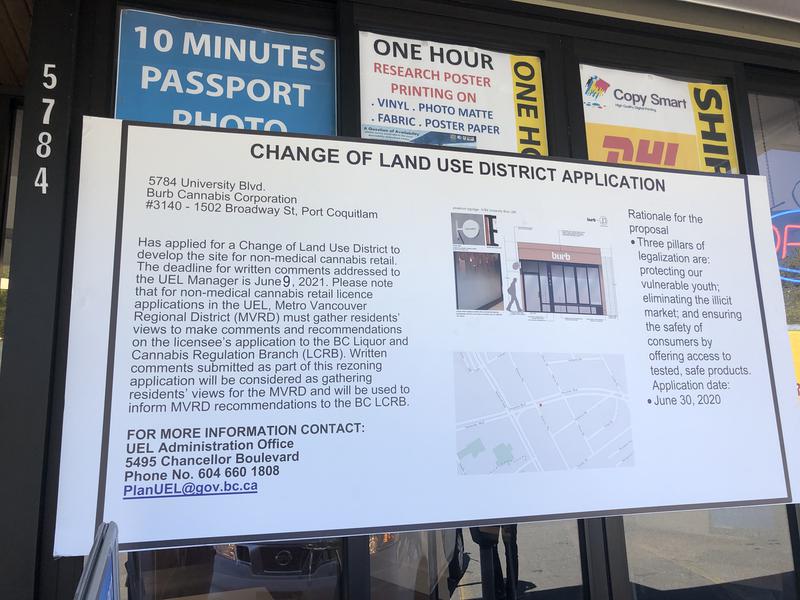 "I don't think it's appropriate to have it in a central hub for students in residence." File Charlotte Alden

Two cannabis dispensaries who have submitted applications for storefronts in University Village are facing criticism from UBC students and residents in the University Endowment Land (UEL).

There is currently a petition by Connie Chen, a UEL resident, with over 1,600 signatures protesting the two storefront applications expressing how cannabis dispensaries are inappropriate for UBC’s academic environment and how they put minors in a vulnerable position for exposure to illicit substances. Cannabis was legalized in Canada in 2018.

Other concerns communicated in the petition included the smell of cannabis and the potential for air pollution on campus.

Some students have expressed similar concerns to Chen and her petition.

“Personally, I think, in general, [marijuana’s] not a bad thing,” said Anthony Chow, a third-year engineering student. “That being said, I cannot stand the smell personally, and I found some others who feel the same way ... smoking on campus or recreational marijuana, where it affects other people, is a little frustrating.”

According to a UBC FAQ webpage on cannabis use on campus , smoking marijuana is not allowed in indoor spaces and bus shelters. Additionally, smoking is also prohibited on UBC student residences and within eight metres of doors and air intake systems.

Although some people have expressed indifference to dispensaries themselves, a significant concern is where the stores will be situated, as University Village is a highly frequented area for students and residents alike.

“I think locating it in a different area would be best. I don't think it's appropriate to have it in a central hub for students in residence,” says third-year English language and literature major Stephanie Chin. “I think it would be much more appropriate to put it either in the corner somewhere or somewhere where it's away from some residents.”

Chin also said she was worried about the new storefronts being located near restaurants.

“I think substance should stick with substance. So I think it's a little bit odd to have a cannabis store in the middle of a place where restaurants and whatnot are.”

Since the 2019 AMS elections, there have been ongoing efforts to set up dispensaries on campus. There have also been efforts to put a cannabis store in the Nest, another area that students frequent and visit. The AMS argue that opening dispensaries on university grounds can encourage safe usage of the product as well as opportunities for education on cannabis.

John Kaye, creative director and co-founder of Burb Cannabis — one of the companies applying for a store at UBC — acknowledges the stigma surrounding cannabis and the worries of residents on establishing a dispensary. However, he said in an Instagram message to The Ubyssey that having dispensaries will offer safe access to recreational marijuana and eventually eliminate the issue of illegal drug trades on campus.

“We’ve been operating without incident for nearly four years now within the lower mainland and always do our best to support the communities we’re servicing,” he wrote. “You’ll notice the government has labeled retailers like us an ‘essential service,’ which is a testament to the power of this misunderstood plant and the safe and professional manner in which stores like ours operate.”

“We feel if liquor stores are allowed then so should cannabis stores,” he added.

However, despite these efforts, cannabis on campus is still a highly contested subject, and there are several administrative processes and policies that must be followed in order to authorize the retail of cannabis on university grounds.

“The university encourages the University Endowment Lands administration to ensure consistency with the provincial and federal frameworks, and to look to local government best practices with respect to considerations such as operating hours, appropriate licensing fees, and proximity to schools, community facilities, and other youth services,” wrote Associate Vice-President of UBC Campus and Community Planning, Michael White in statement emailed to The Ubyssey.