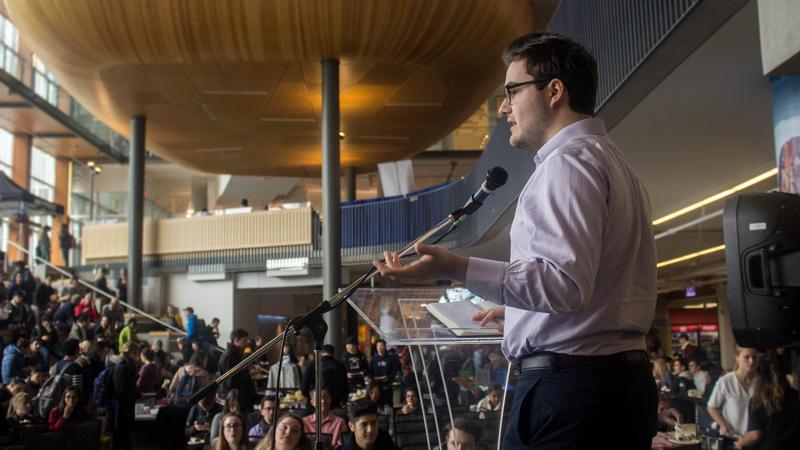 For the AGM to meet quorum, one per cent of all UBC Vancouver students — or more than 500 students — must be present. File Shamit Rahman

A motion of censure against the AMS executive narrowly failed tonight after they were criticized for not adequately advertising the society’s annual general meeting (AGM), which failed to meet quorum.

For the AGM to meet quorum, one per cent of all UBC Vancouver students — or more than 500 students — must be present. After 30 minutes, the meeting can begin without quorum but no motions can be passed beyond reception of the annual financial and president’s reports.

At the October 23 meeting held in the lower atrium of the Nest, only about 20 students were present, most of them affiliated with either the AMS, SASC or The Ubyssey. No attendance appeared to have been taken, and fewer than a hundred chairs were provided.

Law Councillor Dylan Braam — who introduced the motion at tonight’s meeting — criticized the AMS executives for failing to adequately advertise the event and said that they violated their society bylaws for failing to place a notice about the October 23 event in The Ubyssey or another campus publication. 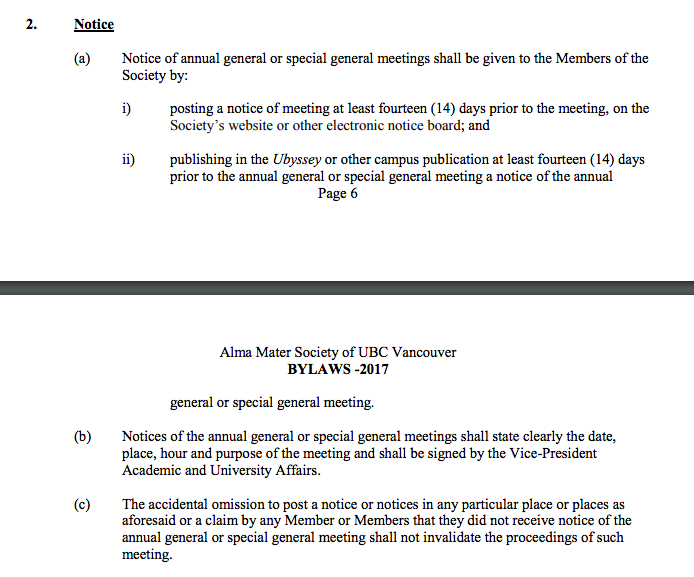 “Over the course of their reports, it became clear that adequate steps were not taken, in my opinion, to advertise the AGM,” said Braam afterwards.

Following rounds of discussion, the motion narrowly failed, with ten votes in favour and ten votes against. In a previous vote, all Councillors unanimously voted to exclude the executive from voting on the motion, judging that it constituted a conflict of interest.

“While Council itself has not condemned it, it was clear there were a large number of councillors — even those who voted no — who were unhappy with the executive’s inaction.” said Braam afterwards.

During her remarks earlier that night, AMS President Marium Hamid said that the society published the AGM’s information on its social media, but did not distribute a newsletter or seek other forms of advertising beyond inviting councillors. She also pointed out that not many councillors were at the AGM.

Regarding the requirement to place a notice in a publication, Hamid said that The Ubyssey had sent a request for comment in advance of the AGM on Friday October 19 — but it was not adequate notice to provide comment.

Bylaw 3.2 a) ii) requires the AMS to publish “in the Ubyssey or [an] other campus publication at least fourteen (14) days prior to the annual general or special general meeting.”

An AMS communications employee sent a one-line email to The Ubyssey notifying the paper of the event on October 9 at 5:38 p.m. — which, under the Bylaw, would have been past the deadline to publish in The Ubyssey.

The Ubyssey did not preview the event because of a lack of comment from the society, but did live-tweet it and published a summary of it the next day after fact-checking claims made by some executives.

The Bylaw was drafted at a time when The Ubyssey was owned by the society, though it operated at arms length from the AMS. In 1995, following a dispute between the paper and the society that led to the Ubyssey’s shutdown the year before, a referendum succeeded in establishing it as an independent non-profit society.

Braam said he did not see any advertisements for the AGM, and noted that the AMS could have placed an advertisement in The Ubyssey’s print issue. Under The Ubyssey’s lease agreement with the AMS, the society is entitled to a free placement every month.

Any UBC community member who pays The Ubyssey’s annual fee is entitled to submit articles or opinion pieces for consideration, with the decision to publish left at the respective editor’s discretion.

But the paper has published opinion letters by AMS executives in the past.

In 2017, the AMS mentioned the AGM in a Ubyssey opinion article written by then-councillor and student senator Jakob Gattinger. The paper itself was not contacted to write a piece in that year.

While Arts Councillor Cole Evans acknowledged Braam’s perspective, he argued that any AMS outreach effort would have inevitably failed because the society “can’t really advertise anything.”

Arts Councillor Jerome Goddard laid the blame collectively, saying that individual councillors should have promoted the event by themselves. He said that voting for Braam’s motion “would not be conducive to the AMS’ PR image.”

He even pointed out that Evans did not share the AGM’s information on his own personal Facebook feed.

“I think we can all agree there was lack of execution here,” Goddard said.

Evans later responded that he didn’t share anything because he didn’t see any advertising materials for the event.

AMS executives were noticeably displeased with the motion, with AMS VP Academic and University Affairs Max Holmes questioning if it should have been submitted to Council in advance and not brought up as a discussion item during the meeting.

The meeting came to a boiling point when Braam said that an unnamed AMS executive had implied to him that the society did not even want quorum to be met, fearing a disruptive motion from external groups could be passed.

According to the September 19 AMS executive committee meeting’s minutes, Holmes appeared to question if quorum was actually necessary. Hamid appeared to express interest in a well-attended AGM but noted there would have to logistics in place to make sure only AMS members could vote.

Braam declined to identify the executive.

In a statement to The Ubyssey, Holmes said he was unable to comment on whether he was the executive Braam mentioned.

“I cannot comment on the individual opinions expressed by a councillor, as there is no way for me to know if I was the executive they were implying,” said Holmes.

“I acknowledge my individual responsibility on this matter and look forward to healthy discussions with any AMS councillors if they wish to have them.”

Hamid did not address the accusation, but asked Braam during the meeting to refrain from “bringing up arguments he could [have] misconstrued.” Braam responded that he was a direct party to the conversation.

Hamid declined to comment on the reasoning behind Braam’s initial motion.

“The AMS does not comment on the individual opinions of AMS Councillors,” said Hamid in a message to The Ubyssey.

At the conclusion of the meeting, Braam encouraged councillors to pursue more ambitious goals and called out an attitude of complacency and apathy in AMS Council.

“There’s often been an attitude in this society of just doing what’s good enough ... I think good enough is not good enough. We should always be striving as an organization to improving,” he said.

“Whether or not it’s difficult does not mean it’s impossible.”