UBC to now charge a 1.75 per cent fee on credit card transactions 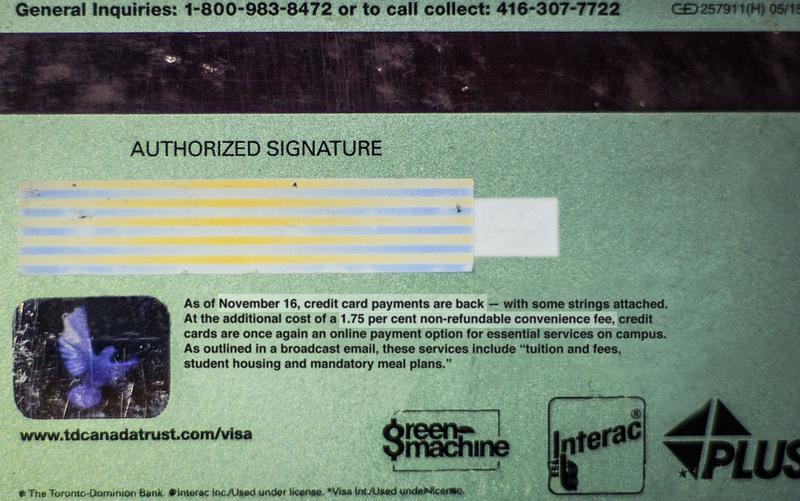 As of November 16, credit card payments are back — with some strings attached.

At the additional cost of a 1.75 per cent non-refundable convenience fee, credit cards are once again an online payment option for essential services on campus. As outlined in a broadcast email, these services include “tuition and fees, student housing and mandatory meal plans.”

According to Darren Fernandez, UBC’s associate registrar, “every credit-based course will have the convenience fee applied to it.” More specifically, there is no difference between undergraduate and graduate, full-time and part-time, or onsite and online programs. Likewise, both domestic and international tuition payments will be charged the same fee.

For student housing, the fee instalment is the only payment that is affected. Other fees, such as those for a student’s residence application and deposit, will be excluded. When paying mid-level residence (Fairview) costs for a medium room for a full year, the 1.75 per cent convenience charge increases costs by $120.68.

“In the rest of our residences, there are cooking facilities so a meal plan is not required, but some students do buy into optional plans. Credit cards have always been accepted for them and will continue to be accepted without a fee,” said Andrew Parr, the managing director of Student Housing and Hospitality Services (SHHS). “You can also pay for [food from the bookstore and outlets] with credit cards, without having to pay the fee.”

Why a convenience fee?

This decision marks the third change in UBC’s policy regarding credit card usage in the last nine years.

In 2007, UBC made the first removal of the credit card payment option against domestic tuition. International tuition, student housing fee instalments and mandatory meal plans were later cut from this service in 2015.

Although the three changes differ in action, they all aim at lowering the $2.7 million transaction fees that UBC incurs yearly. Since these measures do not cover the full cost, what remains is “netted off against the revenue, which otherwise flows to the faculties in the case of tuition fee or housing in the case of student housing and meal plan payment,” according to Ian Burgess, the comptroller of the university, who is responsible for leading the Budget and Financial Reporting departments.

While it is therefore necessary for UBC to have a cost-cutting mechanism, the two mandated cuts were not well-received by students.

For tuition payments, credit cards were not the most popular choice, but “it was an option that some people really relied on for a variety of reasons,” according to Fernandez. For some international students, the cut meant that “they could not get money out of their country on time to pay for tuition, or the amount of money that could be taken out was restricted.”

As a result, individual students and groups have been lobbying for the reinstatement of the credit card payment option. For instance, Eric Douglas, the president of the Acadia Park Residents’ Association, wrote an open letter regarding the effects of the cuts. Others sent their suggestions directly to SHHS and Enrolment Services.

“Some suggested methods on how to bring it back, the convenience fee being one, [and] said that ‘you can charge me an additional x number of dollars just so I can use my credit card,’” said Fernandez. “We also received some similar commentaries from parents.”

Accordingly, both Parr and Fernandez noted that the responses to the new change have mostly been positive. “Aside from the convenience, having the individual who uses credit card pays the fee [instead of distributing the cost to everyone] also makes it an equitable solution,” said Parr.

Despite the preference for a convenience fee, UBC could not have started with this policy because of its contract with Chase Paymentech, the service provider. It was only until the end of the contract in 2015 that the university could negotiate for the fee.

Burgess attributed Chase Paymentech’s initial unwillingness to allow for the convenience fee to the fear that this cost would reduce the volume of transactions and therefore the revenue. As indicated by UBC’s cuts to the service, however, the practice of making the merchants cover the full transaction fees is not sustainable, which the provider “has now slowly realized.”

At the same time, UBC also could not have circumvented this rule by imposing a blanket fee. Since this fee applies to all students regardless of whether they use credit cards, it would be “considered a mandatory fee, which is not allowed by the province,” said Burgess.

Beside this constraint, time was also required to merge the credit card option back into the system.

“In addition to the two months of planning and design, it took approximately four months to reintegrate the technology and test drive the system,” said Fernandez. “When I say testing, it means [people] going into a test environment within the SSC to make fake payments to see how it would look for a student and whether there would be any issue.”

Students are actually not paying the full amount of the credit card transaction fee — UBC is handling some of the financial burden as well.

As the product of the negotiation between UBC and Chase Paymentech, the number takes into account the university’s transaction fee and the service provider’s interest.

“We don’t have a direct relationship with VISA or MasterCard, so we work through Chase Paymentech as the supplier and the fee varies according to the type of credit card,” said Fernandez. “On average, the fee that we are charged is around 2.1 per cent, but is upward of three per cent depending on the credit card that the individual uses.”

According to Burgess, international tuition’s fee rate is also different from that of domestic tuition. Nonetheless, the average is generally 2.1 per cent. Since the provider is interested in maintaining the volume of transactions, UBC still has to cover part of the cost.

“We obviously are not trying to make money on the deal, but we would like to recover our cost if we could,” said Burgess. “Frankly, 1.75 per cent is close enough for us to make it worthwhile to bring back credit cards.”

When asked if UBC anticipates any future changes to the credit card payment option given its past record, Parr expressed confidence that this new policy has “put us in a place where we can move forward on this and make it the standard for years to come.”