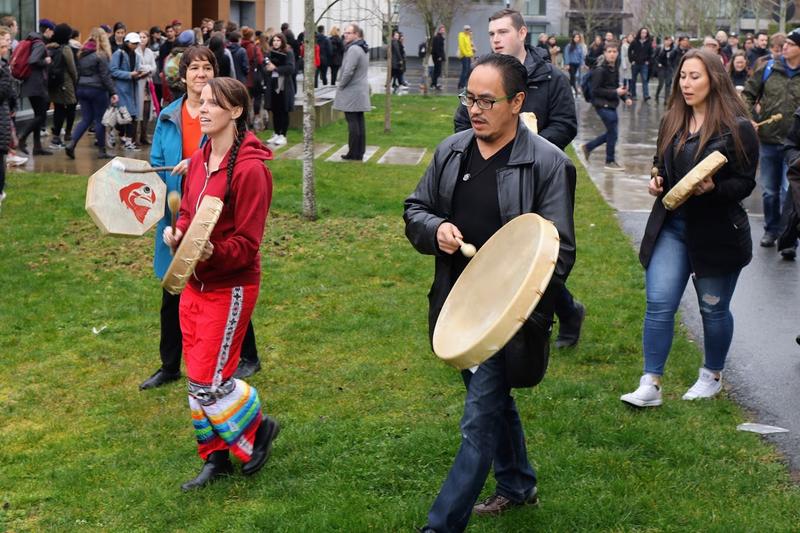 “It forces people to take a look and realize that this is happening and that this is very real in our society.” Zubair Hirji

A large group of students participated in a walkout organized by the UBC Indigenous Law Students Association this morning in protest of the recent acquittals of Gerald Stanley and Raymond Cormier, who were charged with the deaths of Colten Boushie and Tina Fontaine, respectively.

According to Dawn Johnson, a second-year law student and a member of the UBC Indigenous Law Students Association, the purpose of the walkout was to draw awareness to systemic inequalities within the Canadian legal system.

“It forces people to take a look and realize that this is happening and that this is very real in our society,” she said.

The students initially gathered in the Franklin Lew Forum in Allard Hall, where the Indigenous organizers played handheld drums and began to recite speeches before being interrupted by a loud fire alarm that forced everyone to evacuate the building. With their drums in hand, the organizers then led the crowd onto the grass field outside Allard Hall, where they formed a large circle while other evacuees from the building watched from the sidelines.

Within the circle, attendees were encouraged to voice their opinions on the two cases as well as the marginalization of Indigenous people. One speaker discussed the importance of holding a walkout outside of UBC’s law school.

“We felt like this was the place we needed to gather because this is part of the greatest injustice and part of the biggest system of discrimination that our people face, and it continues,” he said.

Another aspect that he vocalized was the issue of race.

“I guarantee, and I’m not being racist, but if they were white people and the roles were reversed, I really think there would have been a different outcome,” he said. “The Crown would have fought harder, the investigators would have done a more thorough job and made sure they crossed all their T’s and dotted all their I’s.” 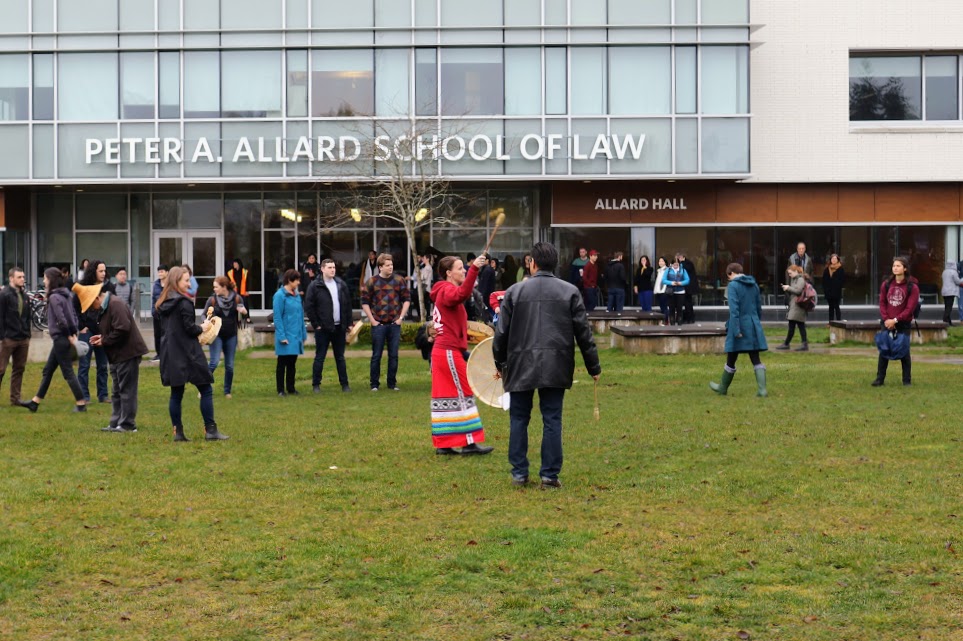 Richard Rupertson, a UBC education student, discussed his experiences with the Canadian justice system as an Indigenous youth.

“As a 13-year-old, I remember being picked up by the police for something I didn’t do and then taken to the police station and made to walk home with no shoes, and they wouldn’t let me make a phone call,” he said.

Rupertson then cited his experience as an example of why Indigenous communities have a lack of faith in Canadian police departments. Reflecting on a quote from his uncle that “we’re one heart, one mind,” he encouraged the crowd to hold hands and then led them in a three-part chant to gather strength.

Moving forward, Johnson argued that there needs to more Indigenous representation within courts and juries. She criticized the jury summons selection process, which permits defendants to remove prospective jurors under certain grounds. In the Colten Boushie trial, this process resulted in the creation of an all-white jury.

“These recent acquittals have been all-white juries that are acquitting white men in the murders of Indigenous people, and that’s something that we continuously see,” she said.

“So we need to see more adequate representation of our people on juries and in the legal system.”