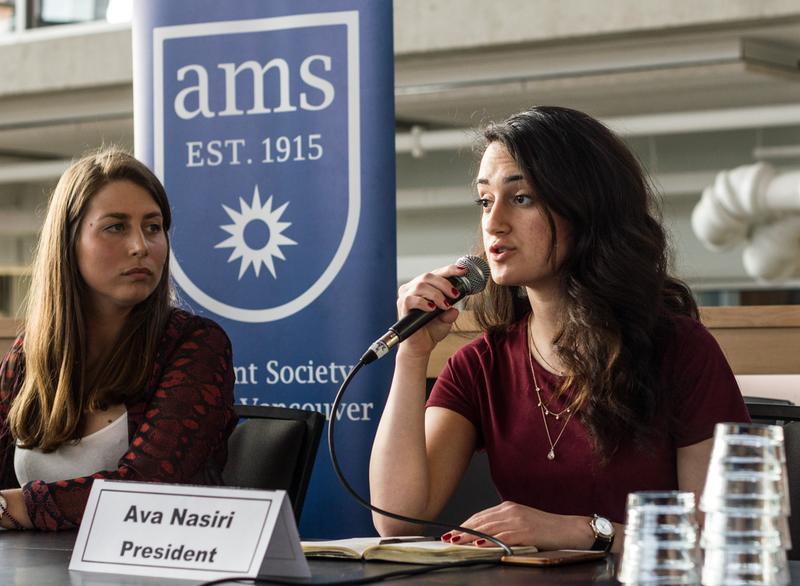 The presidential debate saw Sugar Brewer, Aloha Dave, Jenna Omassi and Ava Nasiri vying to be the face of the Alma Mater Society.

During opening remarks, candidates described their platform. Dave hopes for free tuition, UBC TV — his idea for broadcasted TV about UBC on campus — and to divest from fossil fuels. Omassi ran through a platform that included a strategic plan for advocacy, extending AMS support to all athletics and support for student groups on the whole. Nasiri’s platform was based around empowerment of all communities and Brewer’s focus is on social culture on campus.

Less serious questions dominated the first portion of the debate such as where the candidates’ favourite spot on campus is and what alcoholic beverage they would be. However, when asked how they would bring cohesion to the executive, Dave again referenced broadcasting meetings on a UBC television channel. Omassi spoke to empowerment and accountability, pledging that she would keep her executives accountable and would stay accountable to them. Nasiri plans to figure out the differences in thinking and leading, and then try to overcome these differences. Brewer hopes to find a happy medium for everyone.

A question from the floor asked how candidates would fulfill their campaign promises. Brewer spoke about more active advocacy directed at the university. Nasiri hoped to increase engagement by setting up a strategy to reach 25,000 likes on their Facebook page. Omassi wants to engage more students by extending support and building facilities. Dave reiterated several reasons why he would divest from fossil fuels. In a rebuttal to Nasiri, Omassi said the brewery could wind up like the Perch without proper consultation from students on what they want done with that space. Nasiri pointed out that the mandate to create the brewery comes from referendum results of two years ago, in which students voted wholeheartedly in support of a brewery on campus.

Omassi asked the other candidates how they would implement the results of the governance review of the AMS, due to be completed in the next couple of months. Nasiri said she would wait and see what the results were, then work with her executives to implement the recommendations. Brewer would work on face-to-face consultation with people. Omassi would use the best practices learned from her position as VP academic this past year about consultation.

Dave pointed to the fact that “Donald Trump may soon lose an election in the United States,” which would mean that Bernie Sanders’ promise of free tuition would put pressure on Canada to offer the same. He asked what the other candidates thought about affordability. Omassi cited her experience in advocating for affordability and Nasiri said that policy was just policy on paper until it's acted on.

Omassi: I wrote the book on AMS policy on affordability #AMSElections

Just to clarify, they do have a communications director. Who's here. #AMSElections

Nasiri and Omassi butted heads over Nasiri's promise to make Block Party a charitable event, with Omassi pointing out that this is not fiscally feasible for the AMS. Closing remarks saw candidates reiterating their original platforms.