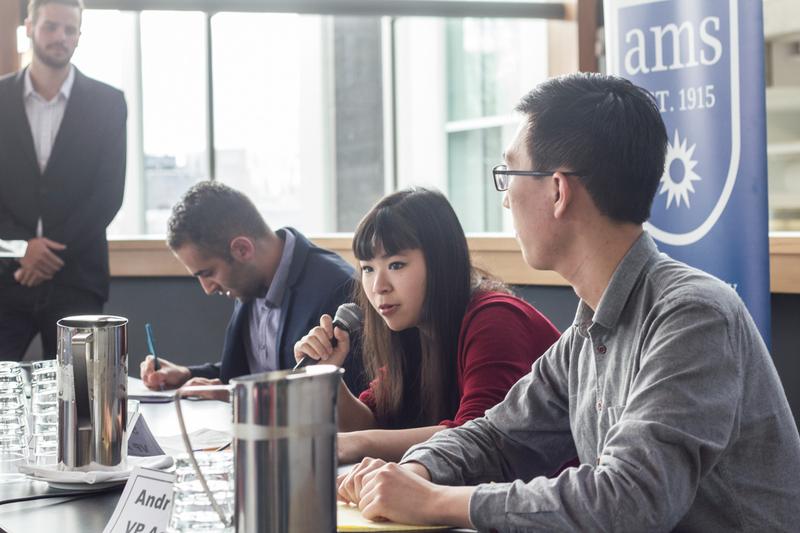 Candidates Hussam Zbeeb, Samantha So and Andrew Liang went head-to-head in a debate to become the new VP academic and university affairs.

The first question opened up the discussion on open education resources. Zbeeb said he will continue advocating for free alternatives to textbooks, which he believes will increase engagement from both students and instructors.

So said that she was extremely supportive of the AMS’s #TextbookBrokeBC campaign and wants to encourage other students to become more involved. Liang stated that he only became aware of the open educational resources topic while doing research for the debate and believes the average student needs to be targeted through outreach programs. All candidates agreed that educational resources should be more open and accessible.

Liang asked the others what they intended to do to end the back-and-forth discussion between the university and the AMS in terms of tuition. So said that she wants to build a better relationship with the university to allocate funds to benefit students. Zbeeb built upon this and said that university-based advocacy needs to be paired with action, highlighting that the administration is aware of students’ opposition to tuition increases, but that we are still not consulted.

Zbeeb then asked Liang how he intends to hold the Board of Governors accountable, to which Liang responded that he is an optimist and that eventually the best ideas come out on top. He noted that UBC is “not evil” and that with the right communication efforts, they will work with the AMS.

The current VP Academic, Jenna Omassi, asked candidates what their plans were in regards to the old SUB or Student Life and Sustainability Building. So said that she would continue to speak to the university and build relationships by bringing in the specific services to the conversation in an attempt to make the university understand what students need. Liang emphasized that ultimately the students don’t have the final say in these matters, but that he plans to “work like hell” to get all the services in one location. Zbeeb said that he plans to hold the university accountable for their promises.

A final question from the floor spoke to the candidates’ platforms towards mental health advocacy, asking what they plan to do to stop students from falling through the cracks. Liang acknowledged that the university has committed to a $2.5 million investment every year towards mental health services, but believes that its effectiveness will take a number of years.

So said that the office is currently working on streamlining referrals between mental health services and Zbeeb, circling back to his platform, emphasized that standardized syllabi would help students know what levels of stress they can expect from their classes before signing up. So pointed out that the VP academic office had changed direction on withdrawal dates and was instead pushing for a later date rather than more flexible standards for late withdrawals, which she agreed with.

The debate ended with the candidates describing what sets them apart from each other. Zbeeb’s involvement in student life — from The Calendar to his undergraduate society and RezLife — means that he intends to use his diversity of experience as a leverage tool to tackle the role head on and to advocate for the students’ best interests. So, although new to student politics, believes that engagement is an important part of her platform and intends to work closely with indigenous populations on campus. Liang closed the debate by voicing his intention to spend the year fixing the Board of Governors so that, in years to come, the AMS can be fighting different issues.

This article has been updated to correct Samantha So’s position on withdrawal dates.