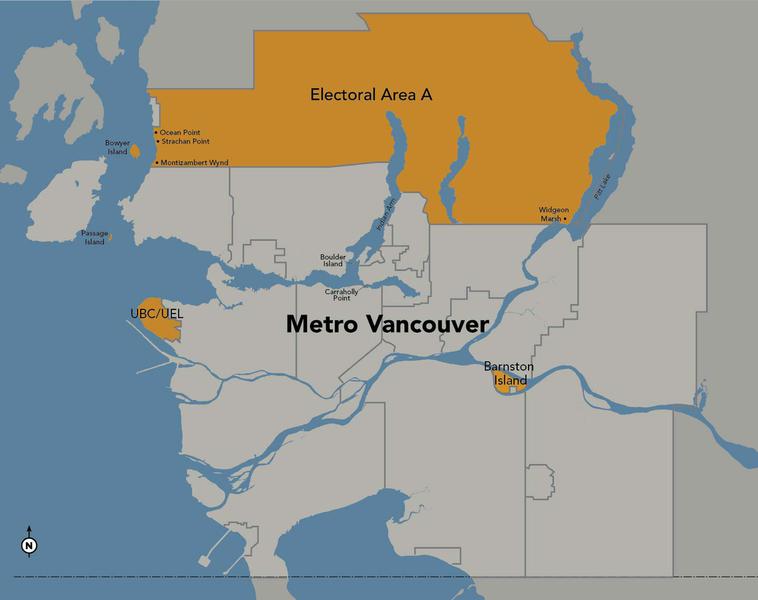 Other than UBC and the UEL, Electoral Area A includes places the average UBC student has probably never heard of. Courtesy Metro Vancouver

The by-election for UBC’s only regional representative will take place tomorrow, June 15, and if you’re a Canadian citizen who lives on campus, you can probably vote.

But first, what is Electoral Area A?

UBC and the University Endowment Lands (UEL) are not a part of Vancouver. In fact, they’re not officially attached to any town, city or district at all.

Instead UBC technically qualifies as rural, meaning it isn’t incorporated into a municipality.

They pay a rural property tax, purchase their own utilities and apply to the provincial government for the approval of land use.

Other rural areas in Metro Vancouver include a large swath of land north of Vancouver that stretches from Howe Sound across Indian Arm to Pitt Lake and small islands in Horseshoe Bay and the Fraser River — places the average UBC student has probably never heard of.

In order to grant some representation to its rural voters, Metro Vancouver groups them together into a single voting block: Electoral Area A (EAA). According to the 2016 Census, of EAA’s 16,133 residents, 15,890 live in UBC and the UEL.

What does the director do?

EAA residents get to vote for one representative, the EAA director, who serves a four-year term and sits on two bodies: the Metro Vancouver Board and the Mayors’ Council on Regional Transportation.

The Metro Vancouver Board comprises 40 directors from 21 municipalities, EAA and the Tsawwassen First Nation. It determines the implementation of services that are best coordinated at the regional level like water supply, waste management, emergency services, housing and many more.

The Mayors’ Council is one of Translink’s two major governance bodies, composed of Metro Vancouver’s 21 mayors as well as directors from EAA and Tsawwassen. The Council is responsible for Translink’s long-term vision, voting on transportation strategies, fare increases and the appointment of directors to Translink’s Board.

From 2008 to 2018, Electoral Area A was served by a single director, Maria Harris, who built an impressive résumé despite the position’s limited power. She procured the director’s spot on the Mayors’ Council, negotiated down water prices and met regularly with EAA’s isolated communities outside UBC and the UEL.

But her retirement has left a vacuum. Justin LeBlanc, a member of the UEL’s Community Advisory Board, ran unopposed for the directorship in September 2018, but resigned shortly after because the work was more than he expected.

Since then, LeBlanc’s alternate Mike Feeley has filled the role, but as a tenured UBC Computer Science professor, he feels too busy to complete his term.

With four candidates running in tomorrow’s by-election, perhaps that vacuum will be filled.

Registration for the by-election takes place at the time of voting, so residents only need to bring two pieces of ID (one with a signature) and perform a solemn declaration of eligibility.

UBC and the UEL’s voting station is the Wesbrook Community Centre, 3335 Webber Lane.

There is other information for non-residents who own property and residents of EAA’s other areas. If that applies to you, read more here.

If you’d like to do some research before you vote, check out our candidate profiles and debate coverage.