EAA is an unincorporated region of Metro Vancouver composed of UBC, the University Endowment Lands, the area between Howe Sound and the west side of Pitt Lake, Carraholly Point and various small islands in the Vancouver area. Zubair Hirji

After the resignation of former Director of Electoral Area A (EAA) Justin LeBlanc, five candidates are vying for the seat in an upcoming by-election. Their platforms cover student interests like the SkyTrain extension, housing and the environment.

EAA is an unincorporated region of Metro Vancouver composed of UBC, the University Endowment Lands (UEL), the area between Howe Sound and the west side of Pitt Lake, Carraholly Point and various small islands in the Vancouver area. 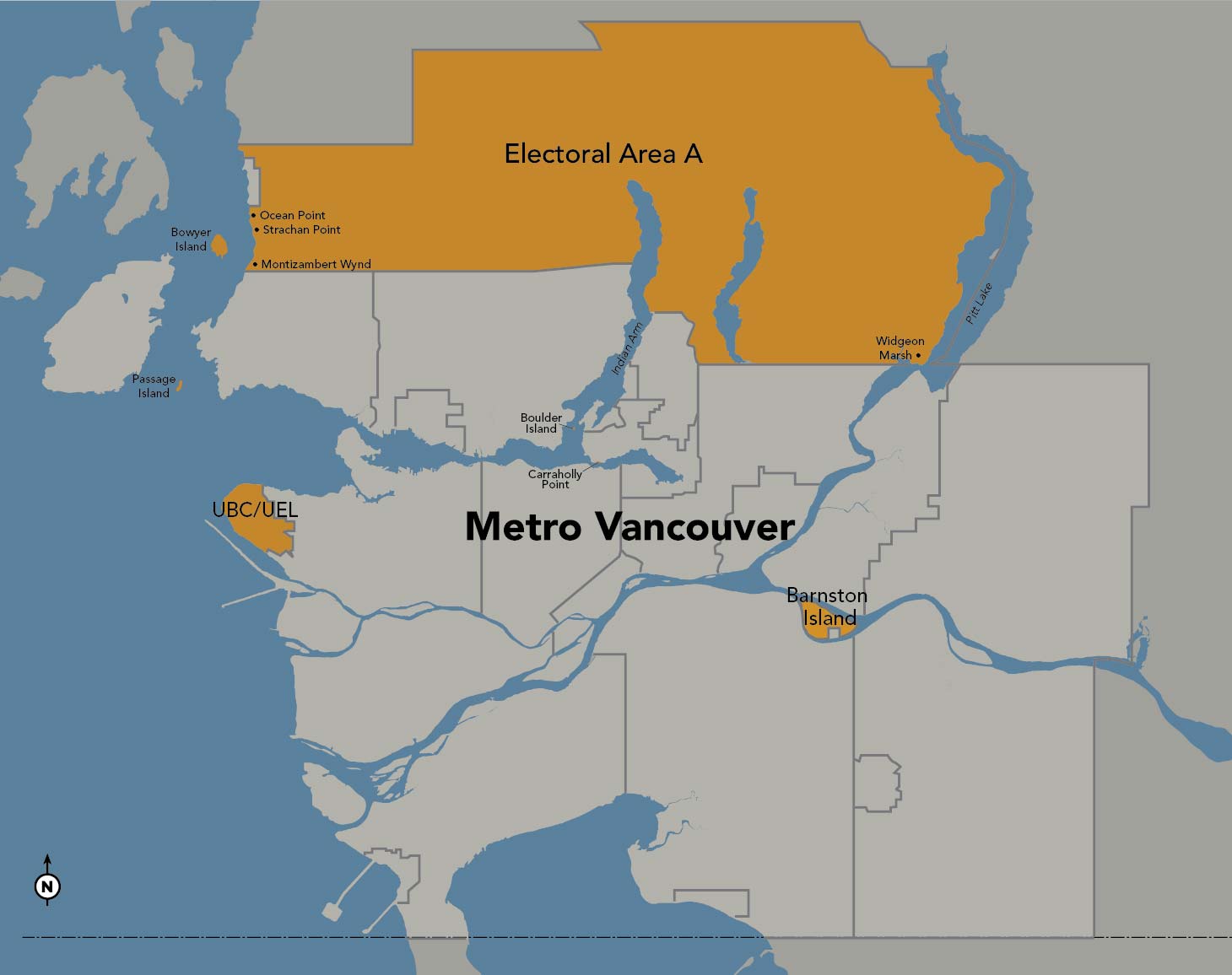 The director, who is EAA’s only elected representative at the regional level, sits on the Metro Vancouver Board of Directors and the Mayors’ Council on Regional Transportation which oversees TransLink.

There will be an advanced voting day on June 8, and general voting will take place on June 15. 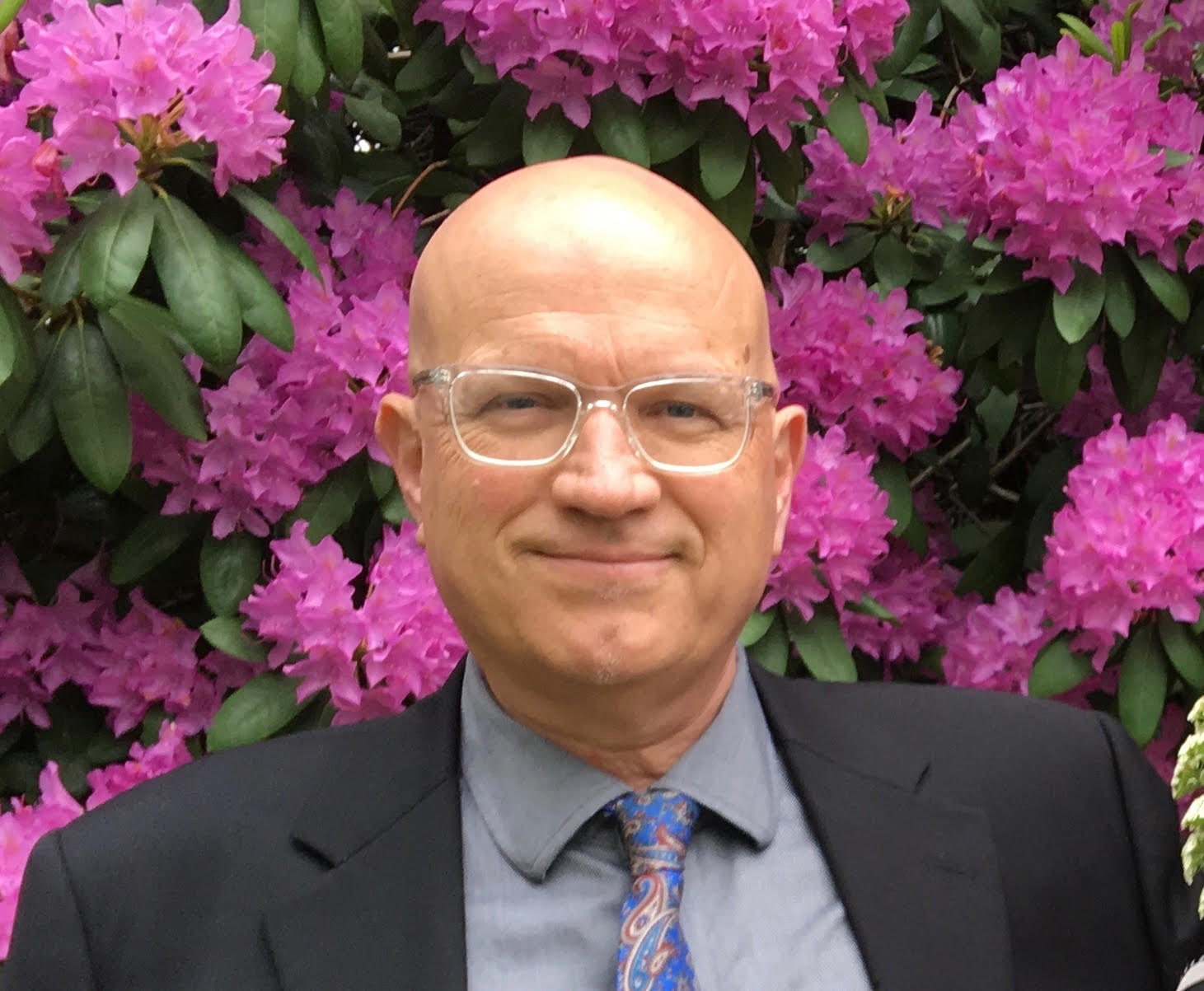 Simon de Weerdt, a UBC graduate and father of four, worked as a software developer and is currently a bus driver on the 95 B-line. He is running for EAA director after being politically active with the BC Green party for several years.

Like all candidates, de Weerdt favours the SkyTrain to UBC, but he says “we need to do it right.” He thinks the train should run underground to preserve property values and the quiet forests of the UEL.

“If you live near the SkyTrain, you can hear it for quite a distance away … [but] one of the wonderful things about the Endowment Lands is you go 100 feet in, and you could be miles away,” he said.

De Weerdt is also concerned about affordable housing near campus, though he admitted he doesn’t have any concrete plans on how to keep housing prices down.

He hopes he can “develop a roadmap” for UBC and the UEL to become its own municipality with better regional representation.

Despite the limited role of EAA director, de Weerdt is confident he can make a change.

“There’s a lot of new people on the board — I think it's about 50 per cent new — and there is a greater interest in climate,” he said. “So we have a fresh chance.” 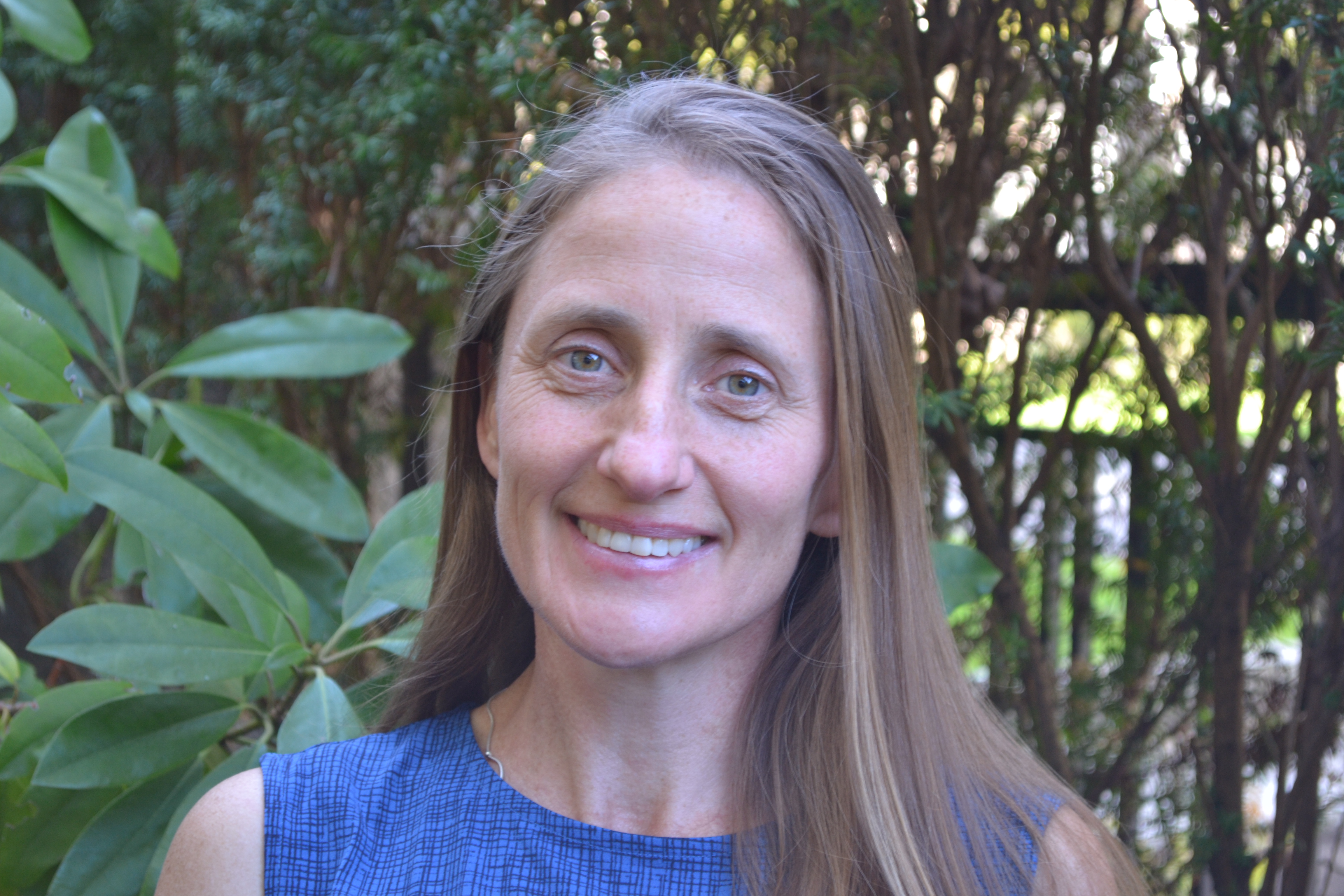 Running on a platform of environmental sustainability, Jen McCutcheon says she will “get everybody on the same page around complex issues” facing EAA.

McCutcheon, a past UBC graduate student and current Hawthorn Place resident, believes her diverse experiences will help her build community as director, especially her 10 years working in global public health.

“I’ve … seen UBC from both the lens of being a resident … and also being a student,” said McCutcheon. “And in a way it feels like those are two different worlds.”

She supports the SkyTrain, but thinks it shouldn’t hinder residents’ quality of life. On the Mayors’ Council, she would maintain the Area’s livability by finding routes that protect green spaces.

“If … public transportation comes at the cost of livability, affordability for our residents, then that becomes complicated,” she said.

McCutcheon added that although Metro Vancouver has “fairly progressive” environmental policy, she wants to push for stronger waste reduction policy and the continued protection of regional parks.

“My family and I spend a lot of time in Pacific Spirit Regional Park,” she said. “We know we need to be making even stronger policies around the environment.” 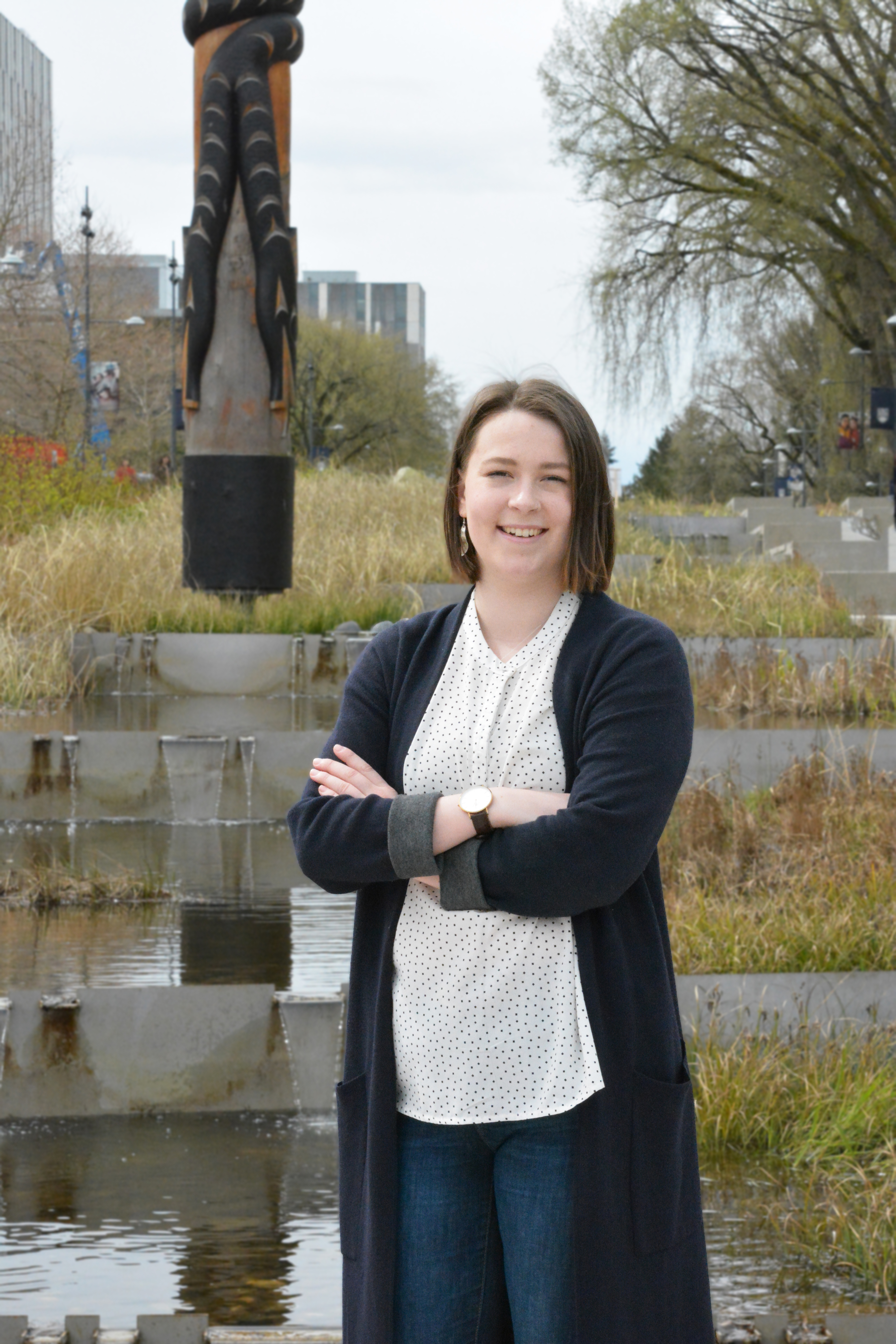 Madison Moore grew up in the Vancouver area and had a vacation home at Pitt Lake. Now, the recent UBC graduate wants to bring a fresh perspective to issues like taxes, transit and the environment.

Moore says her volunteer work will help her engage the Area’s diverse residents. She’s currently “in between jobs,” which she says will allow her to make EAA her priority.

As a transit user, Moore believes she understands the issues facing students better than her older counterparts.

For the SkyTrain, she wants to hold “community meetings” to ensure that residents’ are consulted on what route the extension should take.

She will also work to lower taxes by advocating that the province increase financial support for the Area’s fire department and other emergency services. Additionally, she’ll work to avoid a 20 per cent surcharge on water that the UEL and UBC must pay because they are not members of the Greater Vancouver Water District.

On the environment, Moore wants to prioritize stabilizing the eroded cliffs at Point Grey Peninsula where the Museum of Anthropology sits, all while “[speaking] with [the] Musqueam because they’re often forgotten.”

“I would be a younger voice. I’d be a loud voice,” she said. “I’m interested in … putting Electoral Area A on the map.” 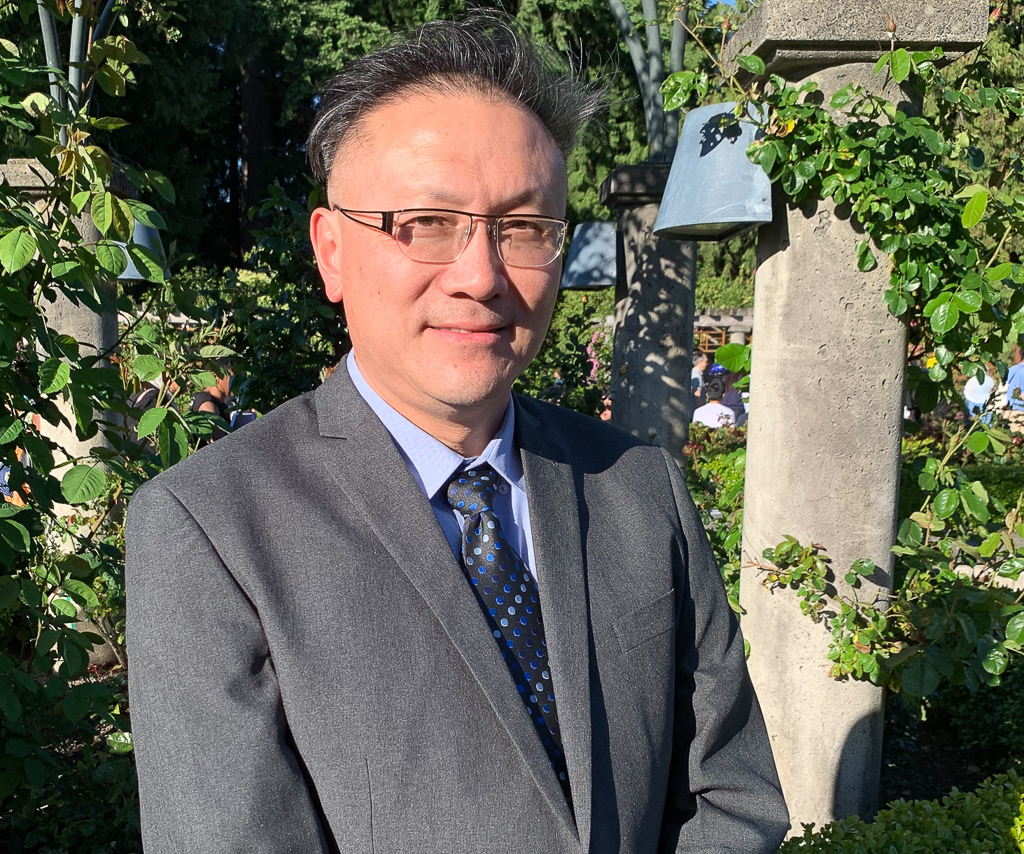 A self-declared “people person,” Sung Yun Wong wants to be the mouthpiece for EAA residents.

Wong used to live at Hampton Place where he now owns property. Currently retired, he lives in both Kitsilano and Surrey — and coupled with his fluent Mandarin, he says this will make him approachable to Mandarin-speaking residents as well as Area residents outside of UBC and the University Endowment Lands (UEL).

“I like talking to the public,” said Wong. “I like to hear what people have to say and I [would] like to be able to … make decisions that will help what people want to see.”

Wong says he supports SkyTrain to UBC, but it’s not his priority.

“Sooner or later, … it will be done,” he said. “So I’m not overly concerned about that, other than to maybe then just to promote it along.”

Along with consulting the community, he will focus on maintaining UBC’s reputation in the international community, though these do not fall under the duties of the directorship.

Candidates will square off at a debate hosted by The Ubyssey on June 6 at 6 p.m. at the Peter Liu Institute for Global Issues.