More than a hashtag: Desmond Cole and Robyn Maynard on defunding the police 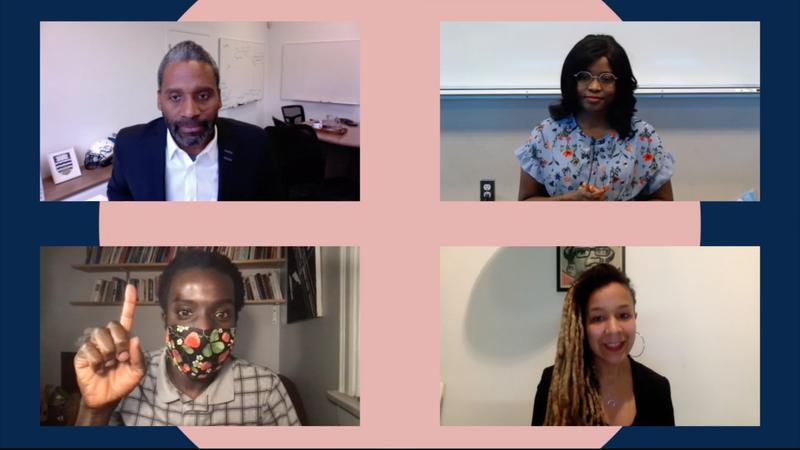 Both speakers focused on the realities of police brutality in Canada. Screenshot via Zoom

On March 12, journalist Desmond Cole joined writer and activist Robyn Maynard in conversation to discuss the limitations of police reform and the movement for abolition in the Canadian context.

The conversation was part of the UBC Connects series in partnership with UBC Okanagan and The Georgia Straight. With over 1900 attendees, the event took place just hours after a British policeman was charged with the murder of Sarah Everard and a day before the one year anniversary of Breonna Taylor’s death, highlighting the importance of an ongoing dialogue on the role of policing internationally.

More than a hashtag

Both speakers focused on the realities of police brutality in Canada.

Maynard, a Toronto-based writer and author of Policing Black Lives, started the event off by answering a question about the current state of Black life in Canada.

Referencing the police-involved deaths of both Regis Korchinski-Paquet and D’Andre Campbell as examples, Maynard said that Black people are currently on the “fault lines of abandonment, disposability and state violence.”

Maynard criticized the utilitarian approach of policing as “the response to every social ill and injustice,” arguing instead that we should “challenge the legitimacy of policing as a practice and as an institution” and instead reallocate those resources into the community.

“The hashtag defund the police is far more than that, it involves … the divestment of municipal budgets… which is supported by almost half of Canadians… [and] the decoupling of police from schools, from mental health, immigration.”

Maynard saw the summer as a disruption to Canada’s relationship with policing.

“The spring and summer showed us — from historic hunger strikes which are ongoing, to street-based protests, to artistic disruptions, to direct actions — [that] Black people are at the forefront of world making … of building abolitionist futures beyond the police state.”

Maynard said the problem is not “over-policing or racially disproportionate policing but policing itself.”

“When it comes to policing Black peoples’ lives and Indigenous peoples’ lives, it cannot be reformed unless through the non-reformist reform that is the abolition of policing itself,” she said.

The impossibility of improving accountability

Cole, a journalist, activist and author who has spent the last ten years reporting and commenting on social justice issues, said that within Canada there is an “impossibility of improving police accountability” — noting that for him there is little difference between the words “police violence” and “policing.”

In addition, Cole emphasized the inability of Canadians to contend with police violence within our own country.

“We are unaware collectively of what is happening in our own country. It is safe when it happens to George Floyd but not safe where we live,” he said.

Cole told the story of a police-involved shooting in Kawartha Lakes in which a 33-year-old man and his 18-month-old son died from being shot at by police last November. Referencing the lack of media attention that the story garnered, Cole asked the audience a rhetorical question.

“If this seems like a bizarre story to you, why haven’t you heard it until now. Why isn’t it a story in the way that a person being murdered in another country by the police is a story?”

“The reason it is impossible to reform … police accountability ... is because these systems are designed to protect the police, not the public,” he said.

Cole also critiqued the media practice of not naming officers who have been involved in police involved shootings.

“That’s common, when police officers engage in acts of brutality they remain anonymous which means that the next day or the next week they can return to our communities and continue engaging in harm,” he said.

Cole criticized the lack of police accountability in Canada.

“That is the system engaging in and existing in the way that it was designed to. There is no urgency for accountability when police engage in these kinds of acts,” he said. “We trust that the police will police themselves.”

Cole argued that criminalizing police officers who have killed civilians would not increase safety in our communities, as he believes that incarceration at any level “perpetuates a cycle” which focuses energy on punishment rather than support and care.”

Cole finished by naming Black and Indigenous people who have been killed at the hands of the police since George Floyd: Regis Korchinski-Paquet, D'Andre Campbell, Ejaz Choudry, Chantel Moore, Julian Jones and Rodney Levi.

“These are Black and Indigenous people, all of them, who have been taken in the last several months in our country by police.”

Maynard said that reimagining an end of policing is necessary and crucial.

“If we think about police managing surplus people, the poor, homeless people, mental health crises and injustice, I think it’s impossible to make something that wouldn’t necessarily be reproducing all of the inequalities that it’s set to manage.”

“It’s about reimagining a multiplicity of presences of support … [and] security for people. What’s exciting about thinking about a world without police is thinking about all the things that could be there in their wakes,” she said.