Here's everything you could possibly want to know about Santa Ono 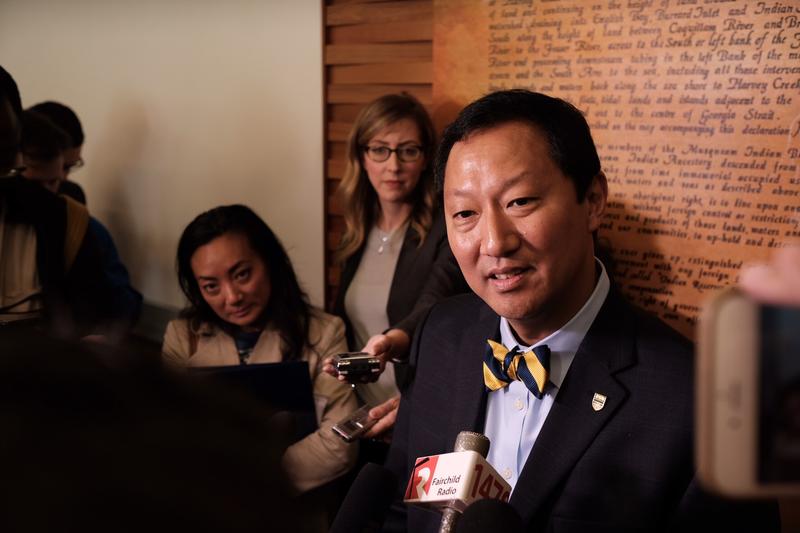 Santa Jeremy Ono was named the 15th president of UBC this morning. Since we had a bit of a head start, we've spent hours gathering information on Ono, from his childhood in Vancouver, to his research at McGill, to his tenure at the University of Cincinnati (UC). Here's everything you need to know about UBC's newest president:

Ono's parents and older brother emigrated from post-WWII Japan after Robert Oppenheimer invited his father, accomplished mathematician Takashi Ono, to work for the Institute for Advanced Studies in Princeton, New Jersey on the recommendation of André Weil. After a while, though, his family had to leave the US to renew their green card, so his father took a position as a math professor at UBC in the early 1960s.

Ono was born on November 23, 1962 in Vancouver at St. Paul’s Hospital — he's currently 53 years old. He’s a Sagittarius, and shares his birthday with Miley Cyrus and Snooki.

His parents named him after Santaro, a Japanese folk samurai character. His brother’s name is Momoro, after Momotaro, another Japanese folk hero.

He loves his name: “People teased me about it as a boy, but I have no problem being called Santa. It is a very happy name. And it is a great icebreaker at parties,” he told UC Magazine.

He attended Towson high school in Baltimore, Maryland before earning his BA in Biological Science from the University of Chicago. He then went on to get his PhD in experimental medicine from McGill and become a postdoctoral fellow at Harvard.

Ono described himself as “out of control” in college, saying that he made decisions that nearly killed him. He credits his Christian friends at McGill with toning him down and “bringing [him] to Christ” — he was baptized in Montreal when he was 20. He's a devout Christian, but “I believe in all faiths,” he told UC Mag. “I don’t want to use my position in any way to be evangelical on a secular campus. I think that being involved in a Muslim group, a Jewish group, a Catholic group or a Protestant group on campus can play a very important role in the development and stability of students.”

Ono has two children, 18 year-old Juliana and 11 year-old Sarah, and a wife, Gwendolyn (Wendy) Yip whom he met at McGill. Yip's father was known as the "Canadian father of fibre optics," according to Ono, and was a professor at McGill. Yip's mother, Alice Chan-Yip, is a member of the Order of Canada and a pediatrician in the faculty of medicine at McGill. Ono's brother is a mathematician at Emory University in Atlanta.

He is an accomplished cellist and singer, is a Eucharistic minister (someone licensed by the bishop to give communion) and has a penchant for bow ties.

Definitely my favorite trophy ever - A Cello Trophy pic.twitter.com/Qns162451F

With Abby and Jim Wilson. pic.twitter.com/JnmiBQb0cX

His biggest fault, according to his wife, is that he does too much for people. “He is a sucker; if somebody needs him, he is there,” she told UC Mag. “And I understand that. We are both like that. It is a wonderful community, and there are so many needs. But there are always needs, and we all want to do great things.”

Literally everyone loves this guy.

Ono has almost 73,000 Twitter followers and is a prolific tweeter, getting up at 4:30 a.m. every morning to reply to student and faculty tweets. He seems to have migrated accounts, though, and can now be found at @UBCPrez. He also has an Instagram of the same name.

He has performed with UC’s cheerleaders, and would occasionally dress up as Santa Claus and read UC students Christmas stories, according to UC Magazine. He was named Inside Higher Education’s “most notable university president” in 2015.

When UC students found out he was leaving, they freaked out.

@PrezOno Not many university presidents are beloved by EVERYONE. We were lucky to have had u. Best of luck and Godspeed. #foreverabearcat

@PrezOno you were most certainly a dream, and without a doubt made UC such a fantastic place to be. UBC is so lucky to get you.

It's easy to see why — in exchange for UC not raising undergraduate tuition, he didn’t accept a salary increase or bonus for two years. And once those two years were up, he kept going: his $200,000 bonus in 2015 went to “14 different organizations and scholarships, including a campus LGBTQ centre, a local science and technology-focused high school and a program for first-generation college students," according to the Vancouver Sun.

In 2013 he toured around the States promoting UC with a hashtag of his own creation — #HottestCollegeInAmerica — while answering anything and everything asked of him during fireside chats.

He describes himself as a "servant leader," which is a follower of a philosophy of leadership focused primarily on “the growth and well-being of people and the communities to which they belong.”

“I see my job as working on behalf of the entire UBC community. I am working to serve you, and not vice-versa,” he said in his announcement speech this morning.

Ono is also known for raising awareness and breaking stigmas about mental health, using his own past challenges with depression and suicide.

Here are some other things he did:

It's only been a few hours since he was announced, but we know a few things about Ono's plans for his time at UBC:

Santa Ono: "my philosophy of leading is to lead from within the faculty.” What a relief. https://t.co/67e0Em5AAs

Did we miss something? Anything you want us to find out more about? Let us know at feedback@ubyssey.ca and we'll update this article.