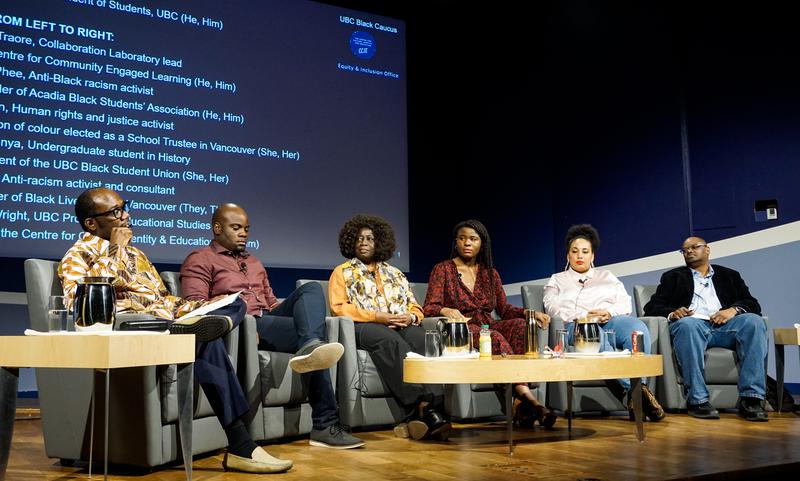 The night began with opening statements from the panellists about their stories with anti-Black racism, followed by panel discussion guided by questions that panellist Dr. Ismael Traoré posed. Sarah Zhao

Shelby McPhee, a Black scholar who was racially profiled at a summer 2019 conference at UBC, discussed anti-Blackness in academia with five other panelists at a talk last night.

“Exposing Anti-Black Racism in Vancouver with Shelby McPhee” was co-hosted by the UBC Black Caucus; the Centre for Culture, Identity and Education (CCIE) and the Equity & Inclusion Office. McPhee was joined by five other Black panelists including activists and members of the UBC academic community.

Despite a brief moment of tension with an audience member near the end of the event, the panelists tackled the often-pervasive anti-Blackness in academia.

“We see this idea that white is right and everything else is a misfit in every part of the university: the curriculum, the classroom,” McPhee told The Ubyssey about the state of anti-Blackness in academia today.

McPhee, who is graduating with a master of arts from Acadia University, attended the annual Congress of Humanities and Social Sciences hosted at UBC last year when two white conference attendees accused him of stealing a laptop. The RCMP arrived on the scene and shortly concluded that there was no substance to the allegations.

An investigation commissioned by Congress’s organizer also found that one of the white attendees had violated its Code of Conduct, leading to a three-year ban from the conference. The other attendee did not receive a penalty because they were not a participant.

The incident set the tone of the event held in the UBC Robson Square Theatre. Around 200 people nearly filled the theatre seats and a few dozen audience members sat on steps on either side of the room.

UBC VP Students Ainsley Carry opened the event with a land acknowledgment, discussing the racial stereotyping that both Indigenous and Black peoples face. With murmurs of agreement from the audience, he noted that experiences of racism are “deeply painful” for Black people to share.

“Shelby’s story should be a reminder to all of us about the potential consequences of activating federal law enforcement because somebody misplaced a damn laptop,” he said.

The night began with opening statements from the panelists about their stories with anti-Black racism, followed by a panel discussion guided by questions that panelist Dr. Ismaël Traoré posed.

Speaking first, Traoré — who is part of the UBC Centre for Community Engaged Learning — read lines from his poem about existing in a Black male body. Human rights and justice activist Sadie Kuehn described her story of moving to Canada, a country often perceived as a “benevolent.”

UBC Black Student Union Co-President Danni Olusanya spoke of growing up in the United Kingdom, where a principal accused her and fellow Black students for an incident they weren’t involved with. Cicely Blain, activist and co-founder of Black Lives Matter Vancouver, discussed how Black people are stereotyped, especially through popular culture. Dr. Handel Wright, UBC professor and CCIE director, called anti-Black racism on campuses “insidious” and more subtle than outside academia.

McPhee rounded off the opening statements by recounting his experience at Congress. He spoke of how his white colleague didn’t believe McPhee when he first mentioned that the two white attendees were photographing and following them and how the RCMP spoke to the accusers first, letting them “control the narrative.”

He then discussed his thesis about white saviourism in women during the colonial era, tying it to the actions of the accusers, one of whom was a white woman.

“Racism and systems of racism continued to uphold this woman’s whiteness as superior,” said McPhee. “ … [The systems] made her complaint factual and mine an alleged thing.”

From believing survivors to finding support

Afterward, the discussion moved to the assumptions made about Black people, the anonymity of perpetrators of racism and where Black people find support.

McPhee brought up respectability politics and how he was perceived “as someone who was beneath the poverty line” and “as the misfit” based on his attire during Congress. Wright expanded on McPhee’s point, mentioning his experiences being misidentified as a student when he was, in fact, a professor.

“Universities were not built for us,” he said.

Focusing on his accusers, McPhee talked about how they continue to remain anonymous, despite the incident’s notoriety.

Kuehn drew in another example where at Lord Byng Secondary School, where a group of teens bullied and threatened a Black student, drawing public criticism for the school board’s inaction.

Looking ahead, McPhee responded to Traoré’s question about how non-Black people should approach reports of racist incidents. McPhee stressed the importance of believing survivors, something that should apply to Black folks too.

“If you believe me, you are part of the anomaly,” he said.

Considering UBC’s hosting of this event, Wright was “hopeful” that progress is being made against anti-Blackness. McPhee added to this sentiment, explaining how UBC retracted its original statement about the Congress incident after criticism on social media.

Yet, Blain spoke about the difficulty of addressing anti-Blackness when people often avoid bringing up someone’s Blackness, choosing to use descriptors such as “baldheaded old guy” as McPhee said he’d been called with a laugh.

But where do Black people find community?

McPhee mentioned religion, while Olusanya said she was inspired to get involved with the UBC BSU due to a lack of support infrastructure on campus.

“If this was a STEM issue, then maybe [UBC] would invest in it,” she said. 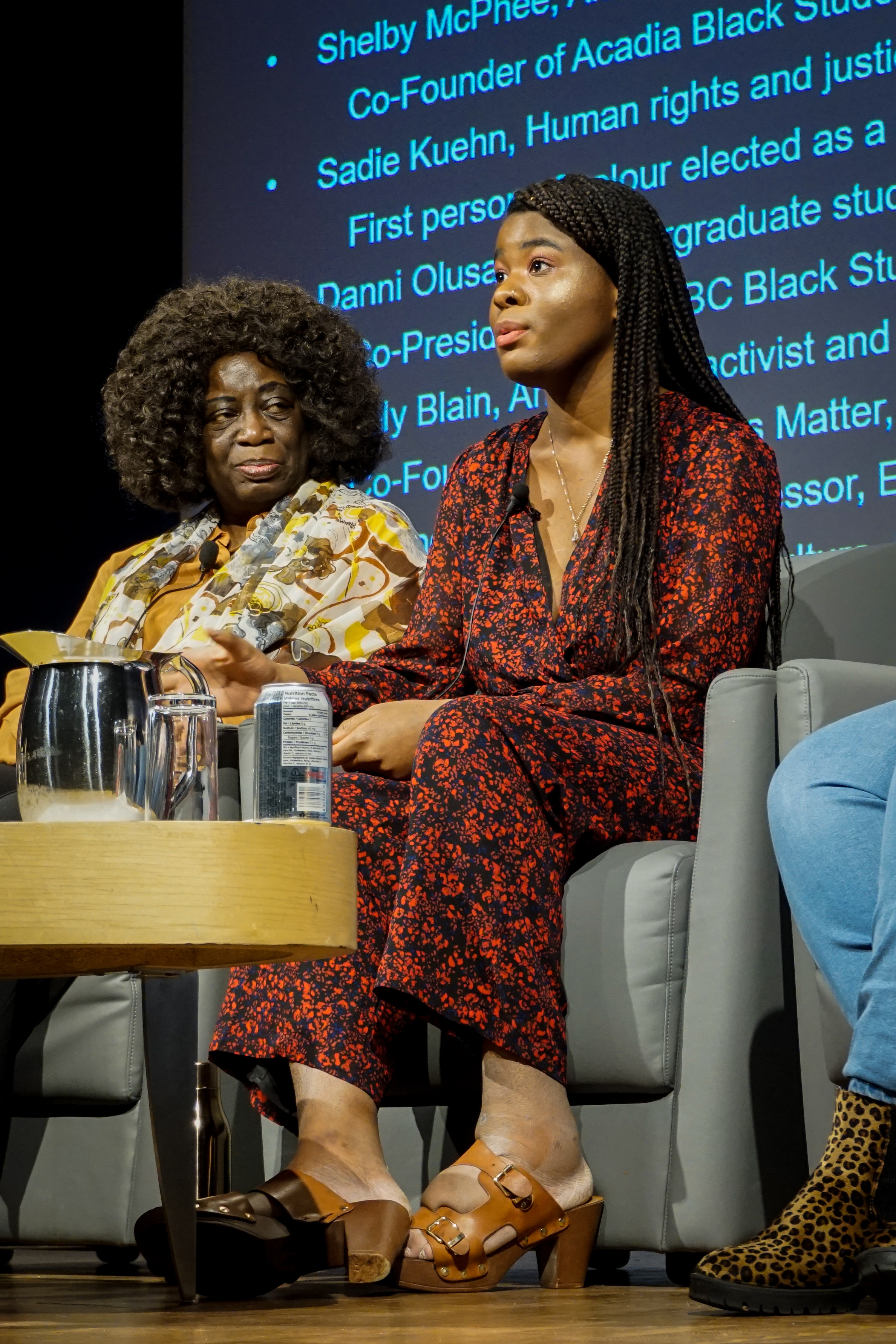 Olusanya said she was inspired to get involved with the UBC BSU due to a lack of support infrastructure on campus. Sarah Zhao

The event shifted to audience questions as Traoré invited Black-identifying audience members to have their voices heard. As the anticipated 8:30 p.m. end time approached, a few people stood up to leave as an audience member asked about the colonial roots of racism.

Traoré and Kuehn discussed the pre-colonial cultures of Africa and McPhee pivoted to talk about how whiteness was constructed through negative stereotypes about Black people. For example, Black people are perceived as loud, so whiteness is viewed as being calm and quiet.

“White people have always known themselves through Black bodies,” said McPhee. “Blackness is what whiteness is not.”

Moving forward, Wright discussed the need for nuance in combating anti-Blackness. Although he reiterated that progress was being made, he said there would be mistakes along the way. But Wright was firm about how Blackness needs to be seen.

“I want us to disabuse ourselves of the idea of Blackness being pure victimhood,” he said.

Reading audience questions submitted in writing, Traoré asked the panellists about anti-Blackness in communities of people of colour. McPhee said it was important for everyone to learn about anti-Black racism and that these communities can be prejudiced.

Wright responded to a second question on how Black folks in Vancouver wishing to get involved in activism, joking that the Black community here is so small that Black people should go to other cities. For him, geography and identity are linked: one can’t exist without the other. In particular, he pointed to Vancouver’s loss of its Black neighbourhoods as why Black community building is tough.

Around this time, a woman who appeared to be white and wore a hat with “Donald Trump” printed on it began filming the panelists from her seat in the front few rows, according to Olusanya and attendee AMS VP Academic and University Affairs Julia Burnham.

After noticing this, Olusanya appeared to address the woman and began speaking about white fragility and why white people get upset when racism is discussed.

The woman quickly left the theatre and an audience member followed her out and asked her about her intentions.

Another attendee called it a “non-verbal statement in support of anti-[B]lack racism,” while others tweeted out their support for the panel.

Closing the night, Traoré thanked the panelist and listed resources for Black people at UBC, including joining the Black Caucus.

“There are a variety of spaces where you can find kinfolks and skinfolks,” he said.

Danni Olusanya is a staff writer for The Ubyssey and a co-guest editor of the Black on Campus supplement.