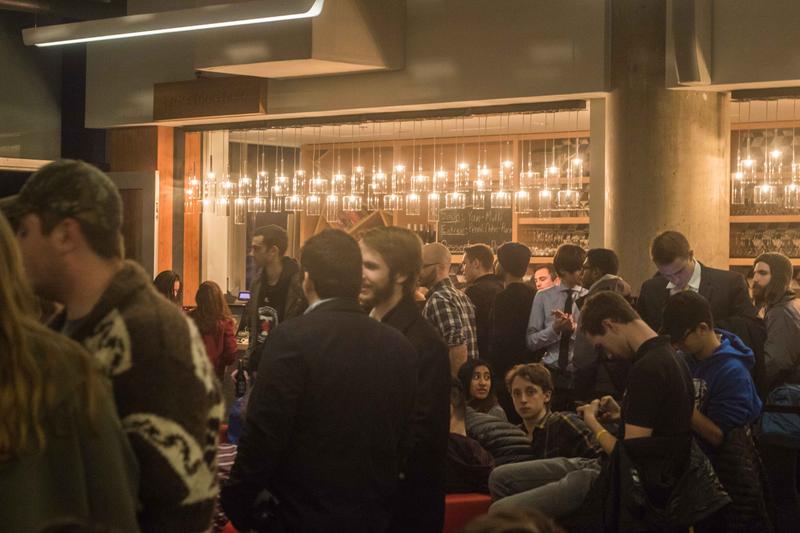 The Gallery was packed with students well before O'Leary was scheduled to arrive. Jack Hauen

Businessman, reality TV star and Conservative leadership hopeful Kevin O’Leary came to UBC last night at an event hosted by the UBC Conservative club. In a 24-minute speech followed by a question and answer session, he outlined his vision for Canada as a country with “rich soil of entrepreneurship” and derided the policies of Justin Trudeau’s Liberal government.

Let’s dig into some of the claims he made:

Reality: Mostly true. Finance Canada just released a report on the long-term fiscal projections of the Liberal government. It’s careful to note that projections of this length are “inherently uncertain,” though, and that the report acts as a “projection,” not a “forecast.”

The report does indicate that Canada will run a $1.5 trillion debt in 2055, but will also run a $26.5 billion budget surplus. It also notes that “the federal debt-to-GDP ratio is projected to remain slightly below its current levels until the early 2030s when it is expected to start trending downward as population aging pressures start to ease,” ending in 17.3 per cent from the current 30.4 per cent.

Reality: Half true. Quarterly GDP growth reached a two-year high of 0.9 per cent in the most recently-reported fiscal quarter ending in October 2016, but no data has been released on the quarter ending January 2017. However, the IMF estimates that growth could reach 2.1 per cent annually in 2017.

Claim: GDP has dropped by half under Trudeau.

Reality: False. Data from the World Bank indicates that Canadian GDP growth averaged 1.08 per cent in 2015, Stephen Harper’s last year in office, and reached 1.2 per cent in 2016 under Trudeau, who took office in November 2015.

Claim: Canada is the only G7 country without a drone program.

Reality: True for now, although Canada’s will be here in 2021. Statistics on which countries have drone programs are hard to get, but 2012 data from the International Institute for Strategic Studies published by the Guardian suggest that France, Germany, Italy, the US and the UK are the G7 countries with programs, and the New America Foundation says that Japan produces small helicopter drones.

Claim: Canada is the largest trading partner with 38 states in the US.

Reality: Almost true. Canada is the largest trading partner with 35 states in the US, according to the Embassy of Canada in Washington, DC.

Claim: One third of the young people in the Gallery last night will go on to start companies.

Reality: False. According to a study conducted by the Calgary-based Centre for Innovation Studies, 13 per cent of working-age Canadians are engaged in entrepreneurial activities, and Canada ranks second – just below the United States – in levels of entrepreneurship in the world.

Here are some studies done specifically on university students:

Forbes: "A Bentley University survey of millennials found 66 per cent of respondents have a desire to start their own business, 37 per cent would like to work for themselves, and 25 per cent would like to own their own company. Yet, as of 2013, only 3.6 per cent of all businesses were owned by someone under the age of 30. Considering that the youth unemployment rate hovers at 10 per cent, it is no wonder that millennials are delaying starting businesses."

The Guardian: "More than a quarter of students have started, or plan to start, a small venture while studying, according to research by Santander. However, only 10 per cent have ambitions to start a business or continue with their existing venture after university."

China Daily: "According to the report, released on Dec 28 (2016), students from prestigious universities were less willing to start businesses, likely because of high opportunity cost. A total of 430,000 students from 1,767 universities in 31 provinces were surveyed. Of the respondents, 89.2 per cent had considered starting a business, with 18.2 per cent reporting firm intentions to do so."

Claim: Canada’s civil service members are the most educated in the world.

Reality: Plausible. No data could be found to confirm this claim specifically, but Canadians are the most likely members of any Organization for Economic Co-operation and Development (OECD) country to have completed post-secondary education.

Claim: Canada has the lowest productivity of any G7 member.

Reality: False. Though Canada is below the G7 average productivity, the OECD ranks Canadian GDP per hour worked at $48.6 USD, ahead of the UK and Italy (both $47.7). Canada is ahead of the UK, Italy and France in terms of GDP per head of total population.

Claim: Denmark, Switzerland and Sweden have some of lowest corporate tax rates in the world.

Reality: Almost definitely false. The Ubyssey found nothing online that backs this up. This Financial Post op-ed by F. Larry Martin (former deputy minister to the premier of Saskatchewan) estimates that, since 37 per cent of carbon emissions are absorbed by land, “Canada could already be absorbing 20 to 30 per cent more CO2 than we emit.”

He makes this estimate based on Canada’s “land area and the global carbon-absorption average,” though it’s important to note that about 14 per cent of Canada is barren Arctic tundra with no carbon absorption ability, and it’s unclear whether Martin takes this into account.

We got in touch with UBC Institute for Resources, Environment and Sustainability professor Hadi Dowlatabadi, who said that there is no evidence to support O’Leary’s claim.

“The net CO2 emissions from forests, et cetera varies from year to year. In general, CO2 is about 80 per cent of our emissions and land use effects are less than plus or minus five per cent of the whole on a year to year basis,” he said in an emailed statement.

Reality: True. China is the world leader at nearly 30 per cent, and India and Japan make up 6.6 per cent and 3.6 per cent, respectively.

Claim: O’Leary has never worked for anyone in his life.

--With files from Zubair Hirji