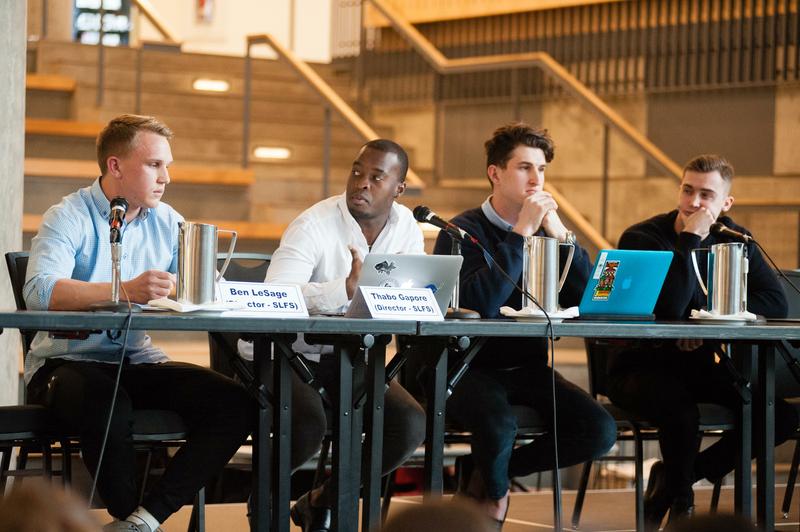 The dust has settled and the 2018 AMS Great Debate is over. Voting starts Monday, but before you head to the polls, let’s take another look at some of the statements made Thursday night.

Cristina Ilnitchi said $1,000 university completion grants the NDP promised, as well as “money for student loans,” were not included in the 2018 BC provincial budget.

True. The budget does not include the grants that were promised, and there is no more money committed to reducing student loan interest.

Mishal Tahir said the mayor’s ten-year transit plan only extends the SkyTrain to Arbutus at first, then to UBC in later years.

True. The Mayor’s Council on Regional Transportation’s “10 Year Vision” plans to expand the Millenium Line from its current terminal station at VCC-Clark to Arbutus. While the plan calls for the eventual expansion to UBC, it says “all stakeholders will work together to conclude how and when to complete the next phase of rail to the Point Grey campus.”

Ilnitchi said the number one issue she saw in the 2017 Student Issues Survey was that students are spending increasing amounts of money on course materials.

Though rising textbook costs have been a hallmark of AMS advocacy, they weren’t mentioned in the public results of this survey.

S.G. Krishna said postgraduate programs have the same level of fees for international and domestic students, but the fee levels are different for undergraduate students.

Krishna said the Board of Governors should get rid of the two per cent annual tuition increase.

The two per cent cap is a policy of the provincial government, not the Board of Governors. The Board doesn’t have to increase tuition, but they can’t affect whether the policy exists.

Aaron Verones said he was the only Greek candidate who accepted the Inter-Fraternity Council endorsement.

Verones later said he misspoke. He is not a part of the Greek system, and the other candidate who accepted the endorsement — Adam Forsgren — is.

Verones said current VP Administration Pooja Bhatti committed to “working very closely” with him to ensure clubs are able to move into the Old SUB smoothly.

In a statement to The Ubyssey after the debate, Bhatti said, “I’d just like to make clear that I’ve not committed to any sort of ‘partnership’ or the like; as an outgoing executive, I’ll be providing support during transition to ensure that the incoming VP Administration can conduct the move and the other responsibilities of their position on their own.”

The president sits on the executive committee by default. And as candidate Marium Hamid pointed out, the other AMS committees Little Mustache and Lin mentioned were folded into the advocacy committee a year ago.

Matthias Leuprecht said that the environment, sustainability or climate change were not mentioned in the Senate 2020 document, which outlines the Student Senate Caucus’s goals for the next two years.

True. Frozen yogurt store Qoola is currently being sued by the AMS for that rent.

Akuechbeny said one fraternity was “monopolizing” the VP Finance position.

Every VP Finance for the past four years has been a member of the Sigma Chi fraternity. If Adam Forsgren wins, he would be the fifth. These incoming VP Finances have often been mentored by the previous one, though the nomination is open to all. Associate VP Finance Linda Huang — who dropped out of the race last week — worked closely with current VP Finance Alim Lakhiyalov.

Candidates Jeanie Malone and Jakob Gattinger both said UBC has not responded to student concerns about the recent tuition increases.

The Board of Governors has promised to write a report addressing the nearly 1,800 official student responses, but hasn’t released it yet.