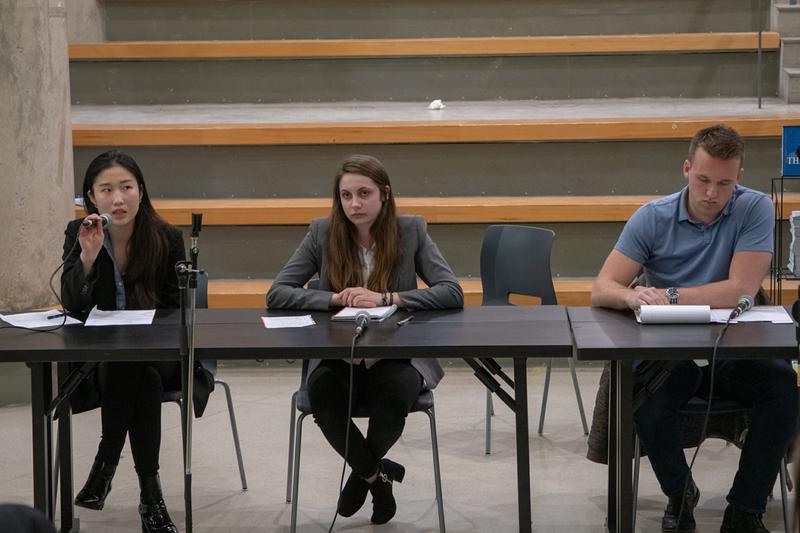 With that in mind, The Ubyssey is fact-checking every candidate’s platform and all the statements they made during debate. We think it’s important for students to know when candidates are telling the truth, whether they’re being misleading and where they’re getting their numbers.

Here are our fact-checks for your VP Finance candidates.

Jon Tomalty: “This year, the AMS divested from all fossil fuel security holdings and solidified Environmental, Social, and Governance criteria into our Investment Policy.”

True. AMS Council voted to divest from fossil fuels on August 1, 2018 under its I-8 investment policy. The policy states that “Environmental, Social, and Governance (ESG) principles must be applied to all investment decisions.”

Tomalty: “The AMS/GSS Health and Dental plan only currently covers $300 in coverage for psychology services which is only enough for two to three visits to a psychologist.”

True, but not for long. While the plan currently covers a maximum of $300 per year towards psychology services, AMS Council voted to raise coverage to $500 on February 27. The increase will require approval from the Graduate Student Society before it can be implemented. According to the BC Association of Clinical Counsellors, $120 is the average cost for a 50-minute therapy session, so $300 would likely only cover two to three visits as Tomalty originally stated.

Tomalty: “UBC Counselling has wait times that push students away.”

True, as per our coverage. There is an average wait time between two to three weeks to see a counsellor on campus, although emergency cases are given priority.

Tomalty: “I will also use the significant reach of the AMS to promote the EmpowerMe crisis line. Despite still being in its early stages, the utilization rate of this service is promising.”

True. According to the 2017/18 Executive Goals Report, the AMS has “seen high usage statistics on the program so far.”

True. This information is taken from the most recent audit of the society. As of the last financial year, the AMS’s had securities worth $6,281,014 and non-marketable government and commercial certificates at a value of $4,536,252 for a grand total of $10,817,266.

Lucia Liang: “To further student engagement, Lucia sees the need to create an official Wechat account as well as joining other platforms to embrace our widely diverse demographic.”

Not her job. The AMS is currently hiring a WeChat coordinator “to help market the AMS to UBC students [who use the service],” but they will work under the Marketing and Communications Manager.

Other platform goals like translating “the AMS website in different languages” and “Establish[ing] a better media presence such as linking the AMS to Canvas” don’t appear to fall under the realm of the VP Finance’s responsibilities, although she could certainly push fellow executives to do so. Linking the AMS to Canvas, however, would be extremely complicated given the amount of private information that the platform manages.

Liang: “… the aim of the i-8 investment policy is to eliminate AMS support for fossil fuels, and instead prioritize companies that are ethically considerate in their practices.”

True. It’s not the sole aim of the policy but it’s part of it.

Viki Loncar: “... Continue to push from the divestment of fossil fuels.”

Confusing. Here, Loncar is indicating that continuing to “push from [sic] the divestment of fossil fuels” is a campaign goal. However, the AMS approved their fossil-free mandate on August 1, 2018, so this isn’t really an option Loncar has in her campaign so much as something she has to do. She could be referring to pushing UBC to divest, but that wouldn’t fall under her portfolio.

Loncar: “IRSA [the International Relations Student Association] will decrease its membership price from $10 to the minimum required amount according to the AMS, which is $2.”

Typo! The minimum membership fee for clubs is $1. Loncar got this right in the debates, though, so we’re just being nitpicky. Sorry!

Loncar: “Change the content of the newly-designed website to be more functional, such as including an actual club list as opposed to having it redirect the user to Clubhouse, and updating the employment centre.”

Not her job. This is another campaign goal that doesn’t really fall under the VP Finance portfolio. Clubhouse is the VP Administration’s domain, and the AMS recently voted to continue an agreement with the platform’s parent company. Loncar could push AMS communications staff to make these changes, for sure, but recent website upgrades were handled by the president.

Loncar: “Hold active and frequent meetings with the Indigenous community at UBC to listen their concerns and take action.”

Not her job. While all executives certainly have a role to play in bringing the society closer to Indigenous students, this specific platform point sounds more like something the VPAUA, the VP External or the President would organize.

Loncar: “Initiate a forum for discussion where students can voice their desires and expectations for the AMS which can then be further discussed.”

Still not her job. Loncar could absolutely play a role in making this happen, but it sounds — once again — like something that would fall pretty squarely under the VPAUA or the President.

Liang: “Credit cards are currently issued to clubs that operate with a budget of over $50, 000 a year.”

False. The credit care initiative was introduced for clubs with a revenue of $10,000 per year. In previous interviews with current VP Finance Kuol Akuechbeny, he’s indicated that not all clubs are taking advantage of getting a card, but many that do have much smaller budgets than $50,000.

Tomalty: “As a policy we as a society use zero-base budgeting … not spending more than you take in.”

Not her job. As Tomalty pointed out during the debate, housing and affordability don’t fall under the VP Finance portfolio. That’s the VPAUA and VPX’s job.

Liang: “I would continue Kuol’s work of publishing the financial report every single year.”

She kinda has to. The AMS VP Finance is mandated to do this. It’s not a campaign point, it’s in her job description.

Loncar: “$16 million of our investment, 65 per cent is towards fixed income portfolios.”

Mostly true. The AMS has roughly $16 million in investments. According to the I-8 investment policy, a minimum of 65 per cent of the total investment portfolio can be invested in cash and cash equivalents as well as fixed income.