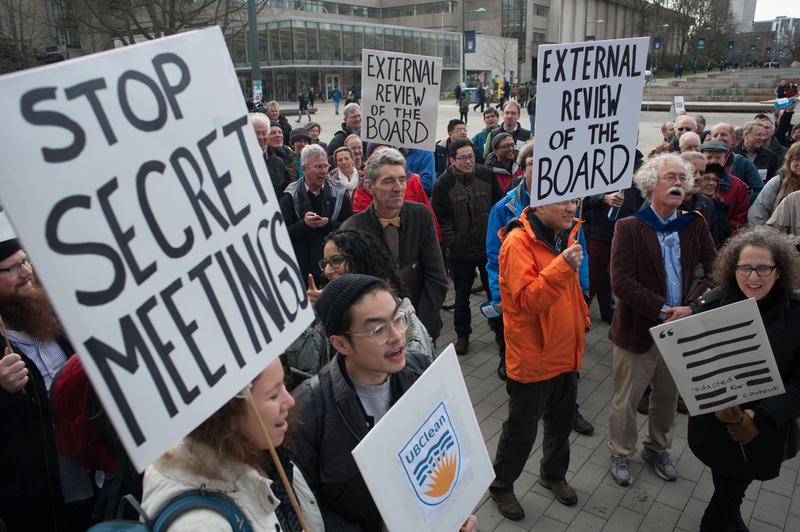 Faculty members protested the Board of Governors meeting in February. Photo Kosta Prodanovic / The Ubyssey

UBC's faculty seems to have had enough of the Board of Governors. In a March 22 meeting the association will put forward a motion of no confidence in UBC’s board for members to either approve or reject.

The beginning of the term witnessed a number of documents pertaining to Arvind Gupta’s resignation being inadvertently released, revealing that the formation of an ad hoc committee of the board which told Gupta he didn't have their confidence and precipitated his resignation.

The secretive nature of the ad hoc committees and the practice of holding undocumented meetings altogether sparked a fire in many members of the UBC committee. During the February 2 board meeting, a grassroots group including staff, faculty and students marched into the meeting to demand greater transparency.

Now, a grassroots group of faculty will decide whether to bring a vote of no confidence to the board. A meeting has been set for March 22 to decide the issue.

According to Philip Steenkamp, VP External Relations and Communications, UBC has responded by inviting representatives for students, staff, faculty and alumni to come to the next board meeting to discuss any concerns that they may have.

“These have been a few difficult months for the university, but everybody’s trying in good faith to work through these issues,” said Steenkamp. “As well, we’ve had a lot of change at the board. There’s a new board chair, there’s a total of five new appointed board members.”

The new chair, Stuart Belkin, embodies a running theme of board appointees with a corporate background who have donated significant amounts of money to the BC Liberal Party.

If the Faculty Association did vote to say that they had no confidence in the board, Steenkamp said that “nothing, really” would happen.

“The Faculty Association is a union ... and we deal with the Faculty Association on terms and conditions of employment,” he said. “The governance of the university includes faculty representation and we have three faculty members who are sitting on the board after being elected by faculty. So that’s the engagement we have with faculty on governance issues.”

However, Mark Mac Lean pointed, in an emailed statement, to a section of their collective agreement that relates to the broader influence of the faculty. Section 16(1) reads, “Nothing in the Collective Agreement shall be interpreted as restricting the role of the Association in representing the interests of its members in the University."

A previous version of this article said the Faculty Association was putting forward this motion, when it is a subset of the group. The Ubyssey regrets the error.