The incumbents were quick to point out their competitors’ knowledge gaps. Zubair Hirji

Newcomers without Senate or AMS experience struggled to stand out during the discussions as they deferred to the more experienced candidates. Some stumbled on issues of policy or stayed mum during open debate periods. “I don’t know,” “I completely agree” and “I don’t have anything to add” were common phrases.

The incumbents were quick to point out their competitors’ knowledge gaps.

On the issue of fall reading break, Burnham and Holmes in particular made it clear that they felt the issue was a moot point because student consultation for a break has already begun its final phase.

But no break has been slated for 2020 yet and if scheduling a break were achieved, it would likely take the form of a long weekend rather than a full week.

Also previously the AMS VP academic and university affairs (VPAUA) from 2017 to 2019 and currently a student representative on the Board of Governors, Holmes noted that any break would involve trade-offs, whether that’s a compressed exam schedule or starting school before Labor Day in August, which would force many students to pay another month of rent.

He directly addressed the candidates who included fall reading break in their platforms.

“Every single year, people run on this topic. They don’t really put a lot of research [into] it,” he said. He named three student senators who have actually put significant work into scheduling a break behind the scenes, noting that he is one of them.

“I think we’ve really clearly outlined here that there’s nothing we can debate about,” said Burnham, who is also the current AMS VPAUA. No debate followed.

Amplifying marginalized voices was a leading topic of the night.

During a discussion of UBC’s Statement on Academic Freedom, Evans — who is also the current AMS VP Administration and a presidential candidate — noted the importance of emphasizing student safety when controversial speakers come to campus.

Candidates weighed in on how they would promote diversity and inclusion within the Senate.

“As a Palestinian myself, I could tell you a lot of people just denied my existence. And since a very young age, I had to stand my ground … I think we need a mechanism of accountability to be put in place, but for now, we have to stand our ground,” said Borno.

Bhangu said she would advocate for an Indigenous seat on the Senate. Holmes said he wanted to see an external governance review of the Senate and collaborate with the Board of Governors on a joint equity, diversity and inclusion policy.

“[Senate is] not inclusive. It’s not diverse,” he said.

“I have been in rooms where there are old white men who are telling me that the Inclusion Action Plan is indoctrination of ideologies. This is absurd and I think it’s a real reflection of what the state of equity competencies within the Senate is right now,” she said.

She stressed the importance of working with the Senate Nominating Committee to promote Senate elections among faculty.

One candidate took a different approach.

“Just throwing money at the situation might not be the most rational thing to do,” said Bellinger.

“We’re not throwing money,” challenged Hakim. “We’re resourcing plans that require implementation … The people who are going to identify the systematic issues in the Senate … cost money.”

Holmes clarified that there were indeed international students on the caucus and that representation among more than 100 departments would be impossible since there are only 18 student senators. He added that the Senate student caucus is by far the most diverse subgroup within the Senate as a whole.

The issue of the climate crisis, raised by an audience question, divided the candidates.

This sparked strong opposition from other candidates, who said that it is the Senate’s job to care.

“The Senate is just as responsible for addressing the climate emergency as the Board of Governors,” said Holmes before going on to state how the Senate could be involved in the discussion. He pointed to partnerships, especially with other institutions and amended curriculums as tangible impact points.

“Any candidate who said this isn’t an important thing to the Senate either didn’t do their research or doesn't care about climate change,” said Hakim.

Bhangu struck a middle ground, stating that she thinks everyone is responsible.

Kong later retracted his statement, saying that he meant it should be a bigger priority for the Board. 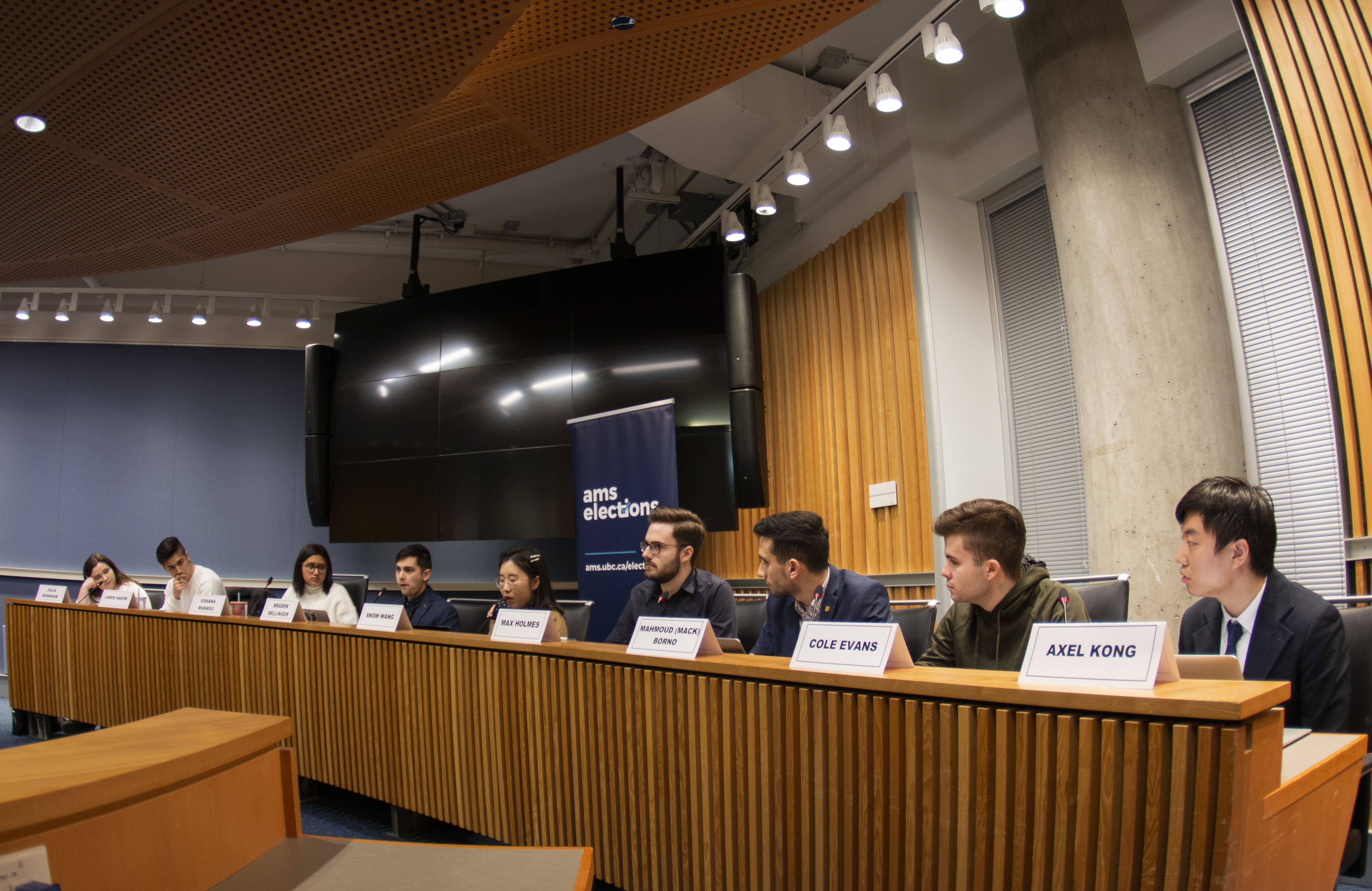 Newcomers fought to stand out in a crowded field. Zubair Hirji

During the Q&A period, an audience member spoke about previously having no idea that the Senate existed or what role it played. They asked the candidates how they would better communicate the Senate’s existence and their current goals.

Bhangu, Kong, Wang, and Bellinger all shared personal anecdotes of confusion, noting how many of their peers did not know what the Senate is when they announced they were running.

Burnham “1,000 per cent agree[d],” but pointed to the high turnover in the Senate secretariat as a leading cause of the lack of communication.

“I think we need to be resourcing that office because it should be the responsibility of that office to make itself known,” she said.

Hakim was quick to say that the Senate body does not deal with communications, echoing Holmes earlier statement that an external review would help address the transparency issues that may be resulting in a lack of public awareness.

Bellinger and Wang both saw social media as a way for the Senate to connect with more students. Wang noted the possibility of too many people showing up to Senate meetings as a challenge.

“If we’re not asking the students their opinions, what are we doing here?” Bhangu said, adding that meeting with students in person would be her approach.

Burnham had previously mentioned that she has been using Reddit as a way to connect with students about the Senate and that the Senate student caucus has a Twitter account that they live-tweet from.

Holmes is clear that he does not believe that it is the Senate's responsibility to communicate what the body is, but it should promote the discussions that matter to students. Evans agreed.

“It's unfair to put the burden of communicating on unpaid student Senators,” said Evans.

He called it a two-fold issue: there is the need for more transparency from the Senate itself, especially fewer in-camera sessions, as well as the need to get messaging out. He suggested the AMS as a good resource to do so.

Kong disagreed with everyone, saying it is students’ responsibility to learn and care about the Senate.

“The best way to actually get students to learn about the Senate is for them to realize that students should be the ones to actually take your own initiative,” said Kong

In their closing statements, candidates stressed their desire to represent students. Bhangu also took the time to urge students to vote in general.

“Please do vote, whoever you vote for.”