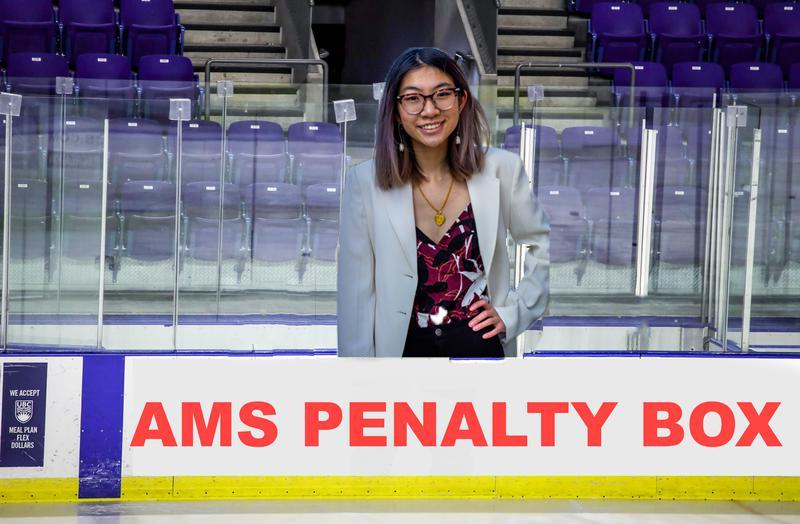 Yee’s campaign has been suspended for 24 hours. Jasmine Foong

Board of Governors and Senate hopeful Georgia Yee has been put in the penalty box for an unapproved Instagram post that was created using AMS resources.

At 5:29 p.m. on Thursday, AMS elections officials announced that Yee’s campaigning privileges have been suspended for 24 hours.

Yee said that she had reposted an AMS Instagram post detailing her work on the society’s annual Academic Experience Survey on her campaign account’s story yesterday. She said it was only meant to go on her personal page.

“It was very much intended to be only posted on my personal as an example of the work that I’m very proud of my team for, especially since it is already approved through AMS communications,” she said.

According to the 2021 AMS elections handbook, candidates must get all campaign materials approved by Chief Electoral Officer Isabelle Ava-Pointon before use.

Candidates are also prohibited from using resources that are only available to AMS executives to avoid conflicts of interest. Yee is the incumbent AMS VP academic and university affairs.

Ava-Pointon wrote in an emailed statement that Yee posted an “edited version of an Instagram graphic from the @ams_ubc account.”

In addition to the graphic not being approved, this constituted a conflict of interest as well, falling under code section IX.A. Article 2.8(a).

"I want to make clear that Georgia did not ask AMS graphic designers to create these posts for her campaign — such an action would have resulted in a much more serious penalty,” Ava-Pointon wrote.

“However, her campaign account did re-post the graphic with a comment about Georgia's accomplishments in her current position as VPAUA, thus effectively making the AMS-made graphic part of their campaign.”

Yee said that the rules left a “grey area” of what constitutes a conflict of interest for current executives.

“It was honestly very much an honest mistake in reposting it on the @vote4georgiayee account versus my personal, which was just a slip up due to being logged into both accounts,” Yee said.

“That said, I’m definitely willing to be held accountable and making sure that the election is fair and equitable for everybody involved.”

This article has been updated to include comment from Chief Electoral Officer Isabelle Ava-Pointon.