Turnout during advanced polls was high, will we see the same today? 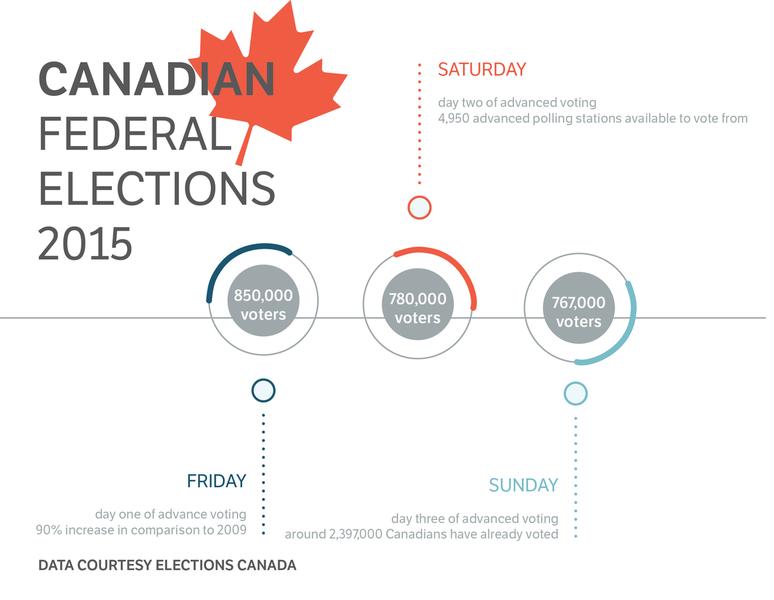 The number of Canadians who cast their ballot during advanced polling was significantly higher than the last federal election - a 71 per cent increase, to be exact. Info-graphic Aiken Lao / The Ubyssey

In the last federal election, voter turnout was the third lowest in Canadian history at 61.4 per cent. But during the advanced polling period of this election, 3.6 million Canadians did their civic duty representing a 71 per cent increase in voter turnout.

An online advertisement on the Huffington Post’s website promoting “#elxn42” reads that on “… the first days of advance polls, 850,000 people voted. That’s a 90 per cent increase from 2008. They did it. So can you.”

The statistics are stirring, but will they continue on into E-Day? UBC Political Science Associate Professor Richard Johnston thinks so, but he also wants to caution against over-enthusiasm for the numbers.

For one, advanced polls used to be solely for those that had no possibility of voting on the day of the election itself.

“There is a kind of culture change underway which is being facilitated by institutional change,” said Johnston. “Now [advanced polls] have come to be accepted as an ordinary part of the voting machinery and, as that idea spreads more and more, people are shifting their casting of the vote to the advanced polls.”

In other words, it could just be the trend of the direction in advanced voting, not additional voters. Still, Johnston did say that this election “has the feel of a much more engaged electorate, more passionate politics and an election in which younger people are more prominent ... So I wouldn’t be surprised if turnout goes up.”

The AMS Champion the Vote campaign played a big part in getting young voters out to the polls in force this year. Headed by Jude Crasta, the VP external of AMS, the campaign was focused on letting people know how exactly to vote andproviding them with the right information to make an informed choice.

The Canadian voting system has received a lot of criticism for concerns that individual votes don't appear to matter, which could affect the numbers of voters. To that, Crasta said, “None of these things matter if you actually go and demonstrate your voice rather than remain apathetic."

"It’s the reason why voting by youth is really important because it highlights to politicians [and] the decision makers that youth issues cannot be sidelined or taken for granted,” he added.

Heightened engagement this election has also led to a surge in strategic voting, making voting feel like a more engaging process and most likely bringing more people out to the polls.

For the final call of voting numbers after Election Day on Monday, October 19, the AMS will be releasing a preliminary report to their council October 28th.

A full report is to then come sometime after that at an undisclosed date. Nationwide voting polls will be released right after the election. These numbers will hopefully show that voting federally has increased.