Hundreds march through Vancouver after energy board renews support for pipeline 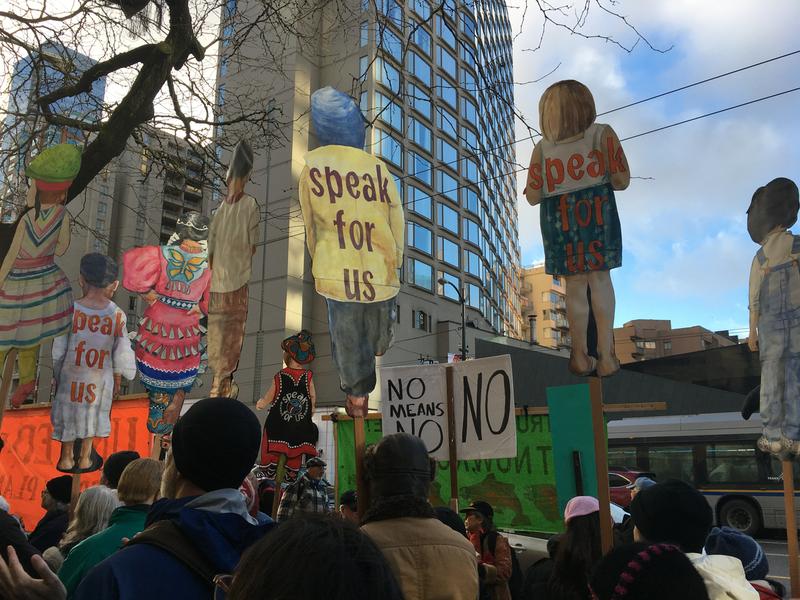 “It’s been a flawed process from the beginning, and so people will keep pushing against it.” Ben Mussett

The “United for People and Planet! No Trudeau Pipeline Expansion!” march got underway just hours after the National Energy Board released its new report, in which the Board renewed its support for the project.

Indigenous drummers led protesters as they made their way from the corner of Burrard and Robson to the CBC building at 700 Hamilton Street, where speakers addressed the impassioned crowd.

Several members of UBC organizations and clubs, including the Social Justice Centre (SJC), the Pride Collective and UBCC350, came out to march.

Jenalee Kluttz, a PhD student, was inspired to protest in defence of Indigenous rights.

Last year, the federal government bought the Trans Mountain Pipeline as well as the expansion proposal from Kinder Morgan Canada for $4.5 billion to save the project from collapse. Shortly thereafter, the Federal Court of Appeal quashed Trans Mountain’s approval due to a lack of meaningful consultation with First Nations and a lacklustre environmental review by the National Energy Board (NEB).

The proposed twinning of the existing pipeline, which runs from Edmonton to Burnaby with a second, smaller terminal in Washington State, would nearly triple its shipping capacity from 300,000 to 890,000 barrels a day. The expansion is estimated to cost $9.3 billion.

Despite the “significant adverse environmental effects” the pipeline expansion would pose to the already-endangered southern resident orca population, the NEB urged the government to re-approve the project because of the “considerable benefits” it provides to Canada, including increased access to foreign markets for the Canadian oil industry.

On Friday several large, inflated killer whale replicas hovered prominently above the heads of protesters as they marched through the city. 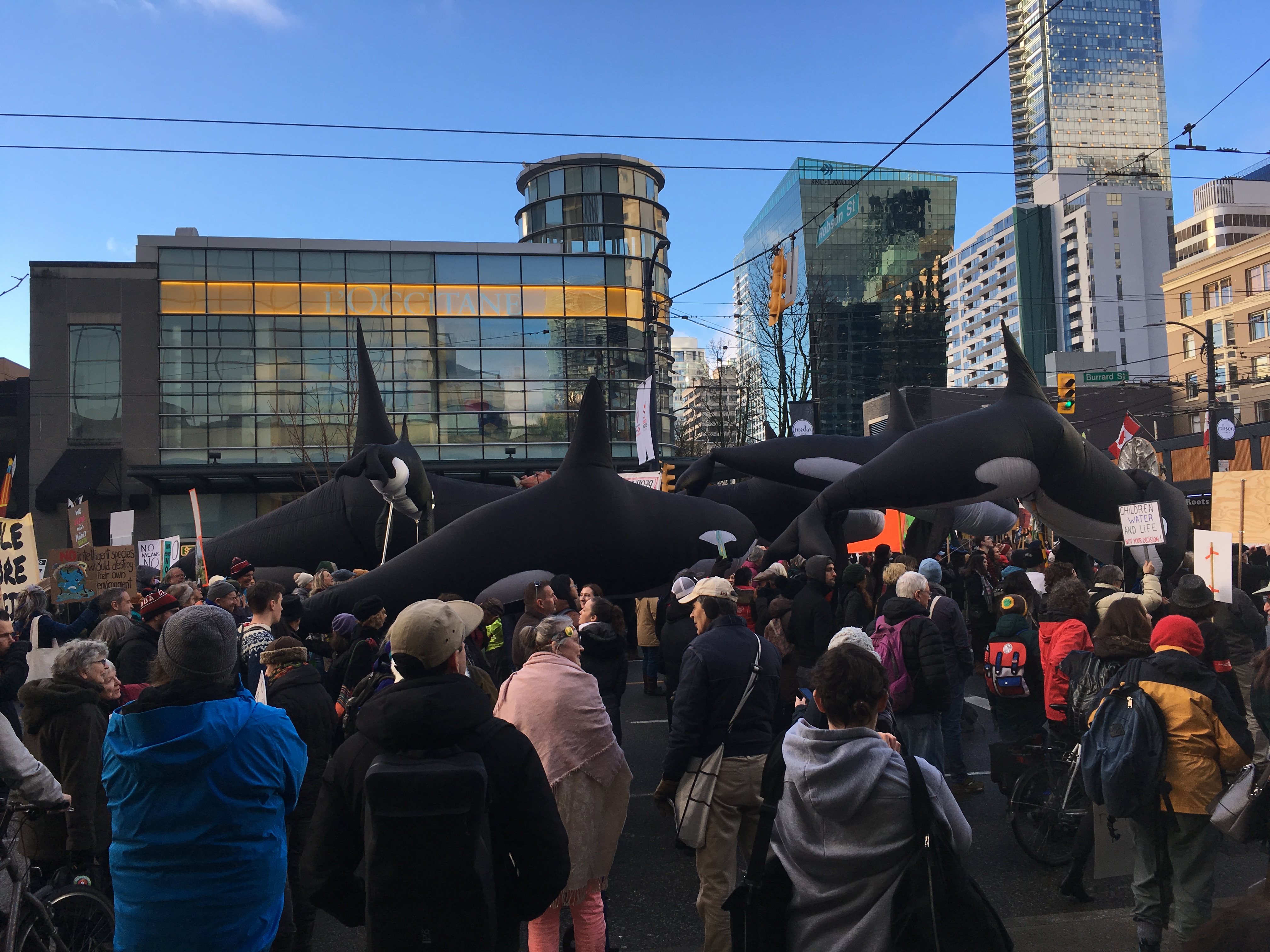 The NEB made 16 new recommendations to the federal government concerning increased marine traffic, in addition to the 156 conditions already imposed on the project.

The Board’s re-approval of Trans Mountain did not surprise demonstrators.

Vancouver city councillor Christine Boyle was “furious and sad” when she heard the news, but said it wasn’t unexpected.

However, she remained resolute.

“My son’s four and a half. He’s carrying a sign that says, ‘I’ve been protesting this pipeline my whole life,’” Boyle noted. “My concern about climate justice is why I ran for council, and it continues to be the thing I worry most about — and there’s no way on my watch this pipeline is coming through.”

Dr. Lynne Quarmby, a biochemist at Simon Fraser University, was also disappointed by the NEB’s decision.

“The fact that we’re even considering this pipeline. The fact that there’s even an NEB review process is, to me, heartbreaking,” lamented Quarmby, who ran as a Green Party candidate for Burnaby North-Seymour in the 2015 federal election. “Publication after publication says we need to be stopping our increased use of fossil fuels as soon as possible.”

Despite spirited opposition, several polls, including an Angus Reid survey from last month, have found that a majority of British Columbians believe Trans Mountain should be built.

Emmett Mark, president of the UBC Conservatives, is one of them.

“The UBC Conservatives welcome the decision by the National Energy Board to approve the Trans Mountain Pipeline expansion,” said Mark in a statement to The Ubyssey. “Projects like Trans Mountain create hundreds of thousands of jobs, directly invest millions into rural and first nations communities, and allow Canada to rely less on unethical oil from Saudi Arabia and the United States.”

Last year, in the Federal Court ruling that overturned the project’s approval, the federal government was accused of “fail[ing] to engage, dialogue meaningfully and grapple with the real concerns” of Indigenous peoples during consultation.

In October, the government announced it was beginning new consultations with First Nations impacted by the proposed expansion, a process that is ongoing. While the federal cabinet is supposed to make a decision on the project within 90 days of the NEB review, observers believe the government may try to extend that deadline.

Dr. George Hoberg, a professor at the School of Public Policy and Global Affairs, predicts the cabinet will, again, approve the project “given the fact that the government owns the pipeline.”

“The next crucial decisions are in court,” said Hoberg. “First, the reference case. But more importantly, whether the Federal Court of Appeal will be satisfied with how [the] Trudeau government engaged with Indigenous groups in this round.”

Gabby Doebeli, co-chair of the SJC, says she’s optimistic the project will eventually be cancelled if civil opposition continues. But she says events like Friday’s march, which ended with a drum circle led by members of the St’at’imc nation, serve a purpose beyond their intended political impact.

“It was a place of resistance, but it was also a place of Indigenous resurgence and strength,” said Doebeli. “I thought it was really beautiful.”