Hundreds of fake accounts are flooding AMS elections pages, and no one knows why 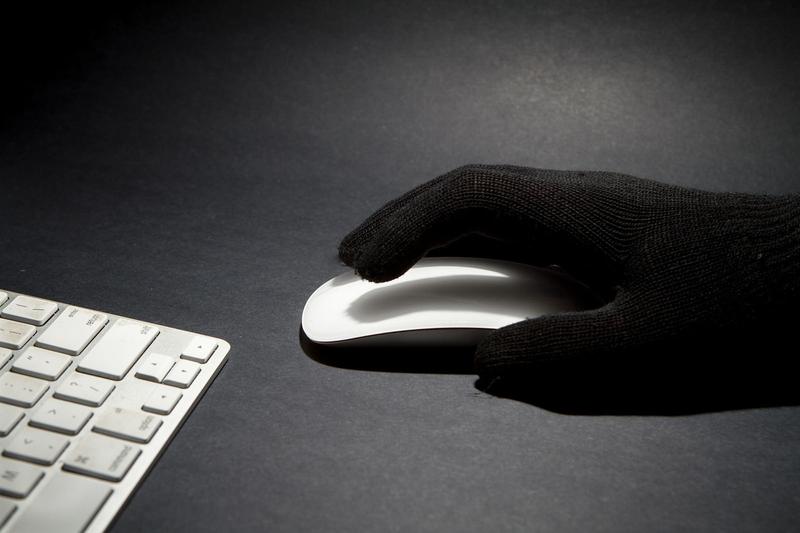 Overall, there are around a thousand identified bots at play. File Kat Jacobson

One night, VP Admin candidate Cole Evans noticed something strange: hundreds of people had clicked ‘going’ to his Facebook event, and they were all Brazilian.

Evans quickly figured out they were fake accounts and deleted them.

“I don’t want to make it look like I’ve ‘bought’ people to go to my event,” he said.

But when he woke up the next day, almost a thousand more bots had joined his page.

Evans is one of four candidates who have seen fake Facebook accounts flooding their AMS elections Facebook events — and no one knows why.

“I didn’t notice them until the Elections Committee brought it to my attention, at which time I saw it on my Facebook page,” said VP External Cristina Ilnitchi, who is currently running for re-election. “... I have no idea why it’s happening.”

The Ubyssey was able to identify at least 180 fake accounts attending Ilnitchi’s re-election event, over 400 bots who clicked ‘going’ or ‘interested’ on Board of Governors candidate Max Holmes’s event, and over 300 who did the same on VP Academic and University Affairs candidate Nick Pang’s page.

Overall, there are around a thousand identified bots at play.

In a statement to The Ubyssey, elections administrator Halla Bertrand said the elections committee “does not believe that any candidate is purposefully buying accounts or the like.”

“I have no idea what’s going on,” said Holmes, who was only alerted about the bots when a friend commented on it.

VP External hopeful Will Shelling has no bots attending his event, but said he noticed the number of people attending events increased dramatically overnight from Monday to Tuesday.

“I just think it’s really strange,” Shelling said. “I mean, this is a student government election, and it’s just strange to have accounts from all over the world following candidates.”

Pang says since the beginning of this week, the number of people who responded to his Facebook event spiked from 300 to almost 600.

“I thought that maybe it was because I started running Facebook ads,” Pang said. “... But I looked at the names, and I had no mutual friends with any of these people. And it didn’t seem like they had any [Facebook] history … they were obviously bots.”

The Ubyssey was able to verify the accounts are fake using reverse-image searches on their profile pictures, most of which were pulled from image-sharing platforms like Flickr.

Additionally, The Ubyssey used analytic software to trace the bots’ online activity, and found many clicked ‘going’ to the same set of unrelated parties across the United States and Europe — even though almost all of the fake accounts are listed as living in Brazil and mostly use Brazilian names. 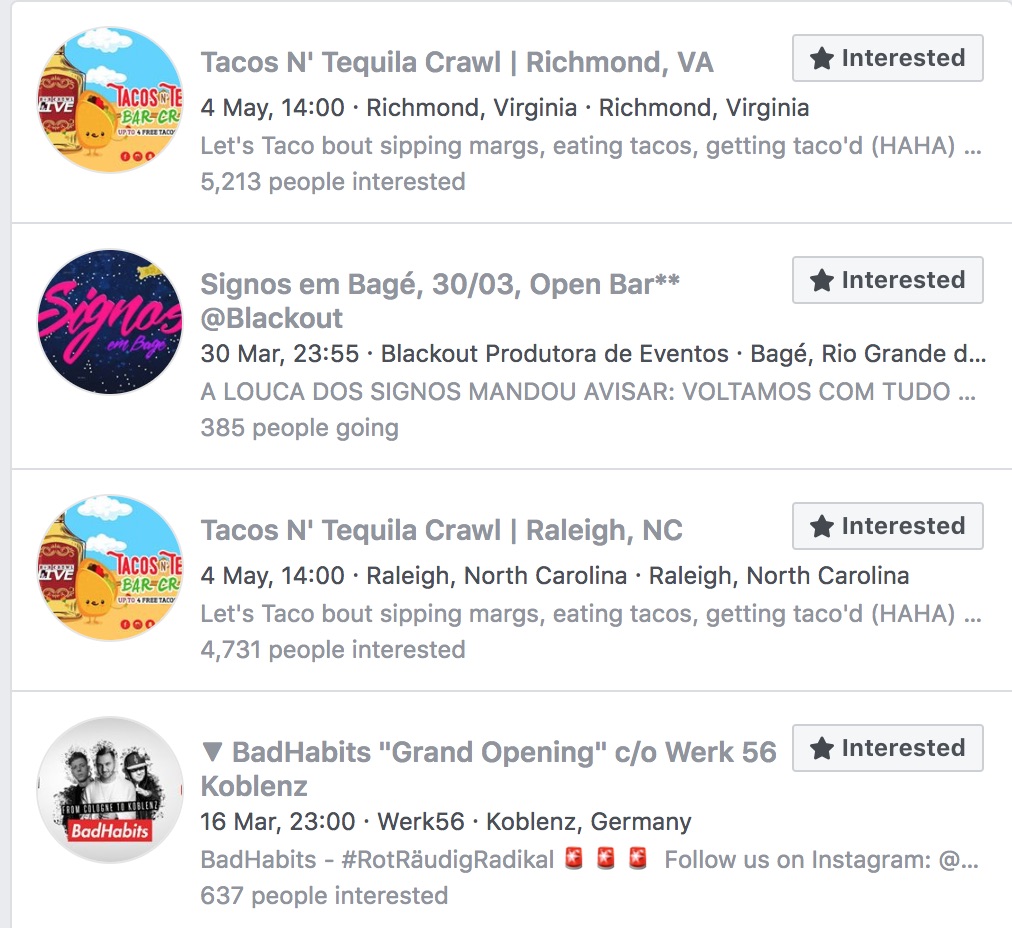 Dr. Chris Tenove, a postdoctoral research fellow at UBC’s department of political science who has written extensively on how foreign actors attempt to undermine democratic elections, says the use of “botnets,” or groups of bots, in elections is increasingly common.

Professor Fenwick McKelvey and Elizabeth Dubois call these types of bots “amplifiers” that work to make candidates, or their ideas, seem more popular.

“The idea is that one speaker or individual can use many fake accounts to make their voice seem bigger, as if it were coming out of many different people or from their fingertips,” said Tenove.

Bots like these are cheap to rent on online black markets. The fake accounts identified by The Ubyssey were not created solely for AMS elections, and are also attending a bizarre range of events, including a “Tacos n Tequila Crawl” in Richmond, Virginia. Many of them were also attending events from multiple candidates, suggesting they were rented in bulk by the same person or persons.

Evans said the bots “are more trolling than helping my campaign.”

But just by clicking ‘going’ or interested, Tenove says botnets can have an insidious impact on voting choices.

“They do have the effect of advertising — you turn the money you spend on the bot into more speech,” he said.

“This kind of trick is an effort to take advantage of certain psychological predispositions we have, which is thinking that the candidate that seems to be more popular is the best candidate,” said Tenove.

It’s not the first time anonymous online accounts have caused a ripple this election cycle.

In some ways, online misinformation is as old as gossip. Evans says he was recently attacked on Reddit for a conversation that he had with a friend. But the friend in question denies making the post, and Evans suspects a third party is now impersonating them — although there’s no way of knowing.

“I think it’s important that student elections should be clean,” said Evans. “People have a right to express their opinion, but I don’t think attack ads are appropriate.”

A Facebook page called Forward UBC has also been running paid Facebook advertisements endorsing and attacking AMS candidates and referendum questions (it also endorsed two candidates for The Ubyssey’s Board of Directors).

But the ads remain online — and many candidates are bothered that an anonymous page is running paid attack ads in a student election.

“This group has not been forthcoming with their sources of funding or who controls it and I believe that we should not be letting anonymous money control our elections,” wrote Board of Governors candidate Dylan Braam on his website.

Forward UBC declined to release how much they had spent on ads, but said their posts had earned 4,000 impressions so far.

The page's operator or operators, who will not reveal their identity, say they don't believe it will create a difference in the election.

"Forward UBC may help boost name recognition and draw attention to canddiate's websites, event pages, etc. but it is highly unlikely they will be the determining factor in whether a candidate is successful or not." said the page in a message to The Ubyssey.

Anonymous ads aren’t the same thing as botnets. But they carry similar benefits for advertising candidates — and both circumvent AMS Elections campaign rules on spending.

“The feasibility of identifying who is putting this money down to buy speech means that it may violate the premise of campaign spending regulations, which is that we track how much a candidate spends,” said Tenove.

So who is paying for it?

Ilnitchi, Holmes and Pang all deny purchasing the bots, and felt it hadn’t visibly aided their campaigns. Evans, for his part, says he’s deleted around 1,500 bots on his page since the election began, which took around two hours.

The fact that the botnet is attending the same AMS events indicates it was purchased by a single party with a vested interest in all four candidates winning.

“You get third parties or consultants who are a couple layers away from the candidate herself making this decision to go into the grey or black markets,” said Tenove.

Tenove says it’s a good reminder that social media is often a far step from reality.

“Social media can be a hall of mirrors, and we need to think clearly and make up our own minds on what we value and why we’re choosing one candidate over another,” said Tenove.

Have any idea who's behind this? Drop our news team a tip at news@ubyssey.ca.