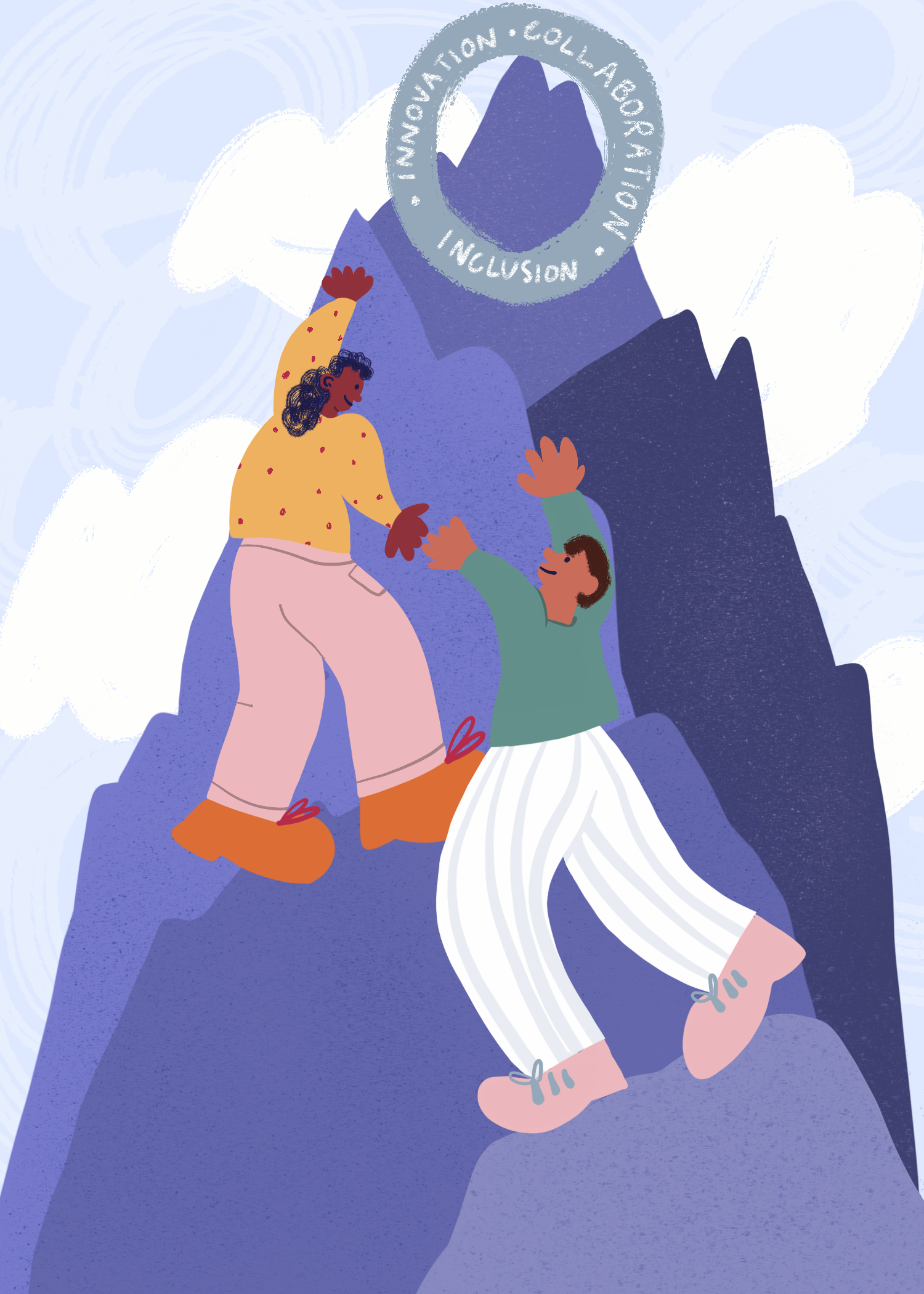 Finlay says the success of the plan “lies in the experiences” of those who are here. Ayesha Diwan

As UBC reckons with its own systemic racism, administrators are turning to the Inclusion Action Plan as one way to fulfill the university's commitment to anti-racism.

Recent high-profile incidents of racism and discrimination in the UBC community — along with Black Lives Matter protests across the US and Canada — have placed increased attention on equity, diversity and inclusion work at the university. The Inclusion Action Plan (IAP) has been cited by various university leaders as an example of UBC’s commitment to anti-racism work.

In his letters to the UBC community after violent incidents of anti-Black racism across North America, as well as an increase in anti-Asian racism related to COVID-19, President Santa Ono made explicit commitments to “ensure adequate resources to implement the goals and actions” of the institution-wide IAP, which began implementation early this year.

Development of the IAP began after the release of UBC’s new ten-year strategic plan in 2018. The overarching plan, titled “Shaping UBC’s Next Century,” has three main themes — collaboration, innovation and inclusion. The IAP’s goal is to operationalize the third theme: inclusion.

The Inclusion Action Plan Working Group (IWG) was formed in the fall of 2018 to draft a definition of inclusion and identify goals and priorities. That working group eventually became the Inclusion Action Advisory Committee, which continued to provide feedback on the drafted plan throughout the process. After over a year of planning and consultation, UBC’s first Inclusion Action Plan was endorsed by the UBC executive in December 2019.

For Cristina Ilnitchi, who first sat on the IWG as a student and then on the advisory committee in her capacity as former AMS VP external, ensuring that student voices were included in the plan was vital.

“It’s important to make sure that students are a part of the plan ... but also are part of seeing the accountability to the actions that are taken, so ensuring that there’s public documentation of how things are progressing and moving forward,” said Ilnitchi.

The former AMS executive also noted that the creation of the IAP allows the AMS to hold the university accountable when it comes to equity, diversity and inclusion (EDI) work.

“[The plan] provides a really important ongoing opportunity and responsibility for the AMS to ensure … that it pushes the university to ensure that it’s well funded, to ensure that progress is moving forward and that it’s … a full campus effort,” she said.

In spring 2019, the Equity and Inclusion Office (EIO) conducted a campus-wide consultation to gather ideas for what to include in the IAP through an online survey, pop-up events in spaces like the Nest and “direct engagement” like events to solicit in-person feedback.

The EIO estimated that it reached about 4000 students, staff and faculty in its spring consultation summary report. Of those, it was only able to gather demographic data for the approximately 700 people who responded to the online survey. Although the report itself notes that because such data is only collected from faculty and staff, the office could not “compare the representation among survey respondents with that of the overall UBC population.”

The survey respondents were overwhelmingly white, something that Dr. Sara-Jane Finlay, associate vice-president of equity and inclusion, partly attributed to the fact that many of the respondents were staff.

“I don’t know that I have a really good answer for that,” she said. “We could surmise all kinds of things about who might be more likely to fill out an institutional survey.”

Due to the majority white respondents in the first stage, one of the goals of the second phase of consultation, conducted through summer and fall of 2019, was to include more voices from “historically, systemically, and persistently marginalized groups” and ensure approval from those groups. The EIO said it hosted nine open sessions with community members, facilitated sessions by request and directly engaged with UBC leadership and stakeholders.

“If you want to really get some deep conversations going around what actions are going to make things better at UBC, you have to be really intentional about creating the space for that to happen,” said Finlay.

Louise Griep, an engagement strategist at the EIO, added that while extensive consultation was the office’s goal, the staff had to keep in mind that it would be impossible to consult every person at UBC for an institution-wide plan.

“It’s not a plan that can represent all particular contexts and situations that exist across the university,” she said. “That will have to happen during the implementation. When people take up the plan and implement it, they’ll have to do that in a way that makes sense to them in their context.”

Griep also pointed out the fatigue that UBC community members feel with consultation, a fact made more apparent to EIO staff in the initial stages of the plan’s development, when they sorted through ten years of reports, reviews and consultations to come up with the first draft of the IAP.

“At a certain point, you need to develop a plan with measures and accountability and get on with it and a plan is a plan,” she said.

Although Finlay believes that “the more data we have … the better we can do our work,” she said the lack of racial demographic data about the student population wasn’t a “major issue” for the IAP consultations since the EIO said it focused on reaching out to existing student groups and organizations representing marginalized communities, instead of individuals in any particular category.

The Ubyssey was unable to verify which student groups the EIO consulted with, and when contacted, the Black Student Union, Colour Connected and other student groups said they had not been consulted. In summary reports for the Spring 2019 and Summer/Fall 2019 consultations, there was no record of consultation “activities and events” with any student organizations.

While Griep agrees in the importance of data, she also worries that the “the focus on data often provides people … with an out,” where the lack of data is used as an excuse for not doing EDI work that is necessary regardless of what data is available.

“We will never have perfect data,” she said. “So waiting for some mythical time in the future when we will have perfect data which will enable us to act, doesn't feel like it’s … a real commitment to equity diversity and inclusion — it feels like a deflection.”

Starting off with large goals

The lack of quantitative metrics also shows up in the IAP itself. Currently, there are no benchmarks or intermediate goals built into the plan to hold the university and its various departments accountable to it — the plan merely outlines larger actions and goals to be accomplished in the next seven to ten years.

When asked about the lack of evaluative metrics in the plan, Finlay emphasized its “collective impact approach.” With some departments “way ahead” of others in some areas and behind in other areas, this approach emphasizes collective change within the university. She also said that the EIO will be developing an evaluation plan — hopefully for fall 2020 — after gathering information about the work that is currently being done to address the plan’s actions.

“We’re keen to support the faculties and the divisions and the departments as they begin to think about … ‘what [do] those actions look like for the work that I’m doing.’ And it’s only through that kind of collective approach that [we] will begin to see ... change to become more inclusive.”

The EIO is currently working with university VPs to determine yearly “institutional priorities” and key actions for implementation. At a divisional level, executive portfolios and faculties will be asked to develop plans that “incorporate inclusive actions,” and departments or units within the larger faculties and portfolios have appointed an inclusion action lead to coordinate plans to implement the commitments of the IAP at the “local level.”

Finlay acknowledged the “tendency to ask those who are most marginalized to take on the burden” of doing EDI work, and she said that the EIO will ask that divisions reflect on who is doing the work and ensure that they centre the experiences of marginalized communities in their planning processes.

“The work needs to be done by all of us, particularly those people who have access to power and privilege, because they’re the ones who actually can make the changes.”

The IAP intersects with the various other plans and strategies the university has put forward in recent years, many of which also grew out of the overarching strategic plan. There’s the international strategy, the sustainability strategy and the Indigenous Strategic Plan (ISP), which is in its final drafting stage. At first glance, the IAP and ISP may seem to address similar concerns, but the differences in the two plans are fundamental to their collective success.

The difference between an action plan and a strategic plan will allow the more “broad stroke” actions outlined in the IAP to work to support the Indigenous-centred “vision, mission and goals” of the ISP.

“To have these double supports, [where] you can go from this plan to this plan, each supporting each other, it can only help to raise the access, awareness, accommodation, release the barriers for any of these groups,” said Associate Professor Dr. Margaret Moss, the director of the First Nations House of Learning, who has been involved in the development of both plans.

“Each one is needed. They each bring a different perspective.”

After years of planning and consultation on repeat, there’s still a long way to go — the university does have to implement these actions, after all — but there are high hopes for what the IAP can achieve.

“I hope that this campus changes quite drastically,” said Ilnitchi. “I think one of the important things about this plan in particular is that this is UBC’s ongoing and increased commitment to inclusion efforts, actions and investment.”

Moss is hopeful that the creation of several institutional plans meant to support marginalized communities will make action and change imminent.

“I’m hoping that, especially with several of these plans coming out in a similar time frame, that people will begin to understand this is beyond concept, now it needs to go into action,” she said.

Finlay says the success of the plan “lies in the experiences” of those who are here.

“Have things been a little bit better, has space been opened up, has there been some sharing of power and leadership roles?” said Finlay.

“Numbers are one thing, but better experiences for people and the opportunity to succeed for all of our students — those to me are the kinds of success I’m looking for.”