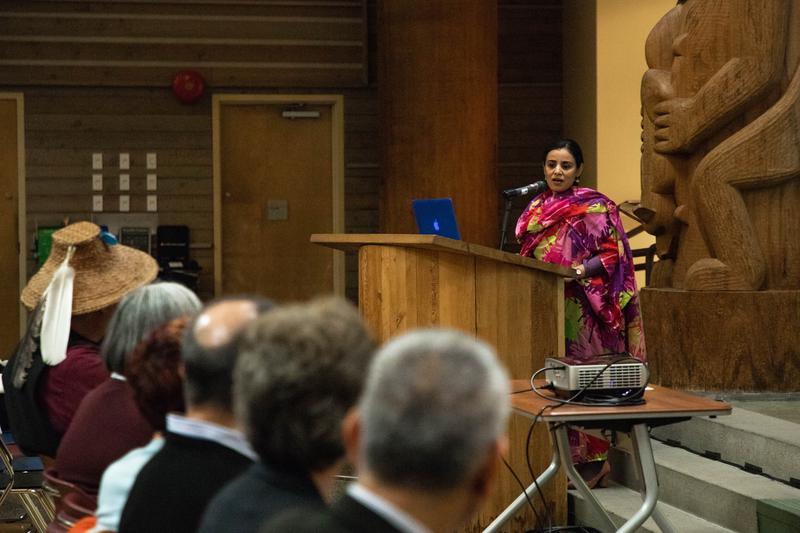 Aboubakrine was the chair and a member of the United Nations Permanent Forum on Indigenous issues until December 31, 2019. She is a medical doctor from Timbuktu in Mali and a member of Tin Hinan, an organization that works to promote Indigenous peoples in Africa. Aboubakrine often focuses on improving the living conditions of the Tuareg, an ethnic confederation who inhabit the Sahara.

Her lecture, entitled “Beijing Women's Conference +25 Years: Progress and Challenges for Indigenous Women’s Rights,” focused on the advances made in the protection of rights of Indigenous women, the challenges faced in implementing those changes and recommendations for Indigenous communities and allies going forward.

Since the 1995 Beijing Women’s Conference — which defined the global agenda for gender inequality with the adoption of the Beijing Declaration and the Platform for Action by 189 countries — Aboubakrine said there has been progress made.

The UN Permanent Forum on Indigenous Issues was created in 2000 and the United Nations Declaration on the Rights of Indigenous Peoples (UNDRIP) was passed in 2009.

On the national level, she referred to advancements for Indigenous women like better healthcare, a better criminal justice system and more positions of power in government and education. But there is still more to be done.

Challenges in the promotion of Indigenous women

Some of the major challenges she defined are lack of recognition, the patriarchy, the lack of implementation of existing laws and international framework and the general invisibility of Indigenous women in the international system.

Aboubakrine explained that in her work, she has encountered countries that deny the idea of Indigeneity altogether.

“We cannot even talk about the UNDRIP with some states because they will just answer, ‘Who is Indigenous? We don’t have Indigenous people,’” she said.

She also examined the effect that the patriarchy has on women stepping up in communities and not “exercising their right in the community.”

She credited this to the growth of Islamism and the legacy of Christianity in these nations.

“This is from our own community and we should sit together and share what we feel about that and how we can go through it.

The lack of implementation of international law and a lack of visibility are also challenges.

“We have lots of laws … but what is done concretely at the ground level [to ensure that] Indigenous women know about these laws?” Aboubakrine asked during her lecture.

She also stressed the issue of not seeing Indigenous women in data or in the main arena of global politics.

“We need evidence of things and we need to see from where we come to where we wish [to go] to see if what we are doing is in the right way,” Aboubakrine said. “We need a continued assessment … to see what is working and what is not.”

Beijing+25 will be held in March at the UN headquarters in New York City.

“What can be done to ensure that Indigenous women are not left behind in the community collaboration and the promises that were made in that document?” she questioned.

She focused on improving the follow-up and accountability mechanisms to ensure that countries are complying with the laws and declarations passed.

On the national level, Aboubakrine emphasized awareness and empowerment.

“A lot of people behave because they don’t know,” she said. “Specifically, this is very meaningful in a country like Canada. We are a country that welcomes diversity, but not all the people know who are the owners of the territories on which we work.”

Indigenous women, Aboubakrine said, should also be empowered within their own community.

“We should empower Indigenous women in decision-making and give them more opportunity … to not always sit in the fact that the men have to be the chiefs, the leaders,” she said. “We should be innovative on that … and give more places to women and more power.”

In conclusion, Aboubakrine reiterated the importance of advocacy and accountability systems.

“Here, academics could be one of our best allies in capacity building and research with an Indigenous approach.”