'You have to reach out': International students concerned about lack of guidance from UBC around vaccine cards 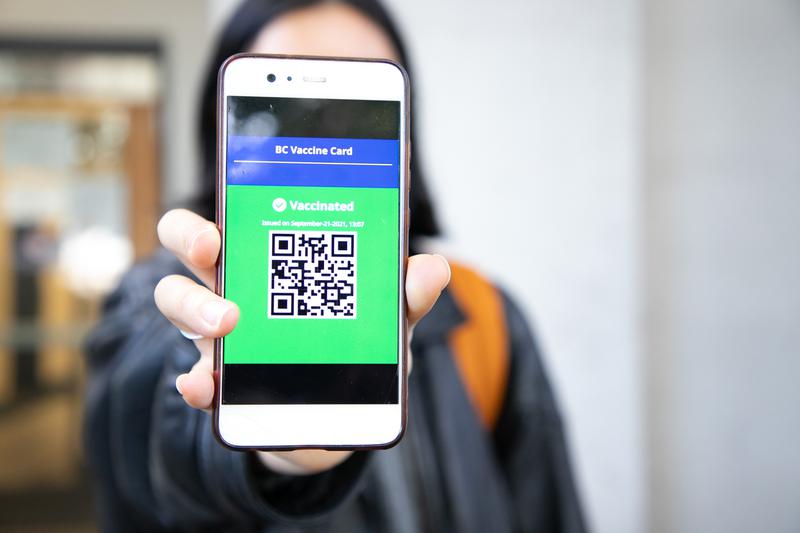 Some students have been unable to apply for the vaccine card itself. Andrew Ha

According to the province, if you are a visitor who was vaccinated outside of BC, or a post-secondary student from outside BC, you should still be able to use your own provincial or international proof of vaccination alongside a government-issued passport or photo ID in place of the BC vaccine card. But due to ambiguity, businesses have varying rules when it comes to those without vaccine cards — with some turning away students who don’t have their vaccine card.

For many students who were vaccinated outside BC or Canada, obtaining the vaccine card has proven to be a challenge. Although the steps to register for the card are relatively simple, many have found that the system took longer than anticipated to process their immunization records.

BC said processing immunization records from out of province can take up to 14 days. However, some waited for weeks for their vaccine card to update, and some have been waiting to no avail.

Charlie Zhong, a first-year student from China, said he applied for his vaccine card weeks ago, but it has not been updated yet.

Zhong voiced his frustration about the lack of clarity in information provided by the province and UBC — he said he’s confused about where he needs a BC vaccine card and where he can just use his paper vaccination card.

This lack of clarity has been reflected in his experience on campus. Zhong said he has not been allowed into indoor establishments in certain cases, but has been in others.

Most places accept UBC card as valid ID, but some have asked for government-issued ID in particular, he said.

One restaurant, which he did not name, refused him entry without physical proof of vaccination, although other places have allowed a verifiable picture as proof.

Struggles to apply for the BC vaccine card

Other students have been unable to apply for the vaccine card itself.

One subset of students in this situation is those who have just arrived in BC and do not yet have a BC Medical Services Plan (MSP) or Personal Health Number (PHN). MSP and a PHN are required to submit immunization records to the official provincial registry and to access Health Gateway — the platform on which the BC vaccine card can be accessed.

Typically, MSP coverage begins three months after arrival in BC, which means that these students have been unable to immediately apply for their vaccine card.

Alexa Elizondo Gil, a second-year student who moved to Vancouver from Mexico on September 1, applied for MSP as soon as she arrived. She’s been carrying around her physical proof of vaccination documentation and government ID to access indoor spaces.

When the provincial health order was initially released, Gil was worried about her proof of vaccination and awaited official information from UBC, but does not recall seeing specific guidance or a direct contact in emails sent out by the university.

“You have to reach out,” Gil said. Although International Student Advising does exist for such inquiries, she said advising was only able to redirect her to the general informational websites, which she had looked at already.

The concern is even greater for those vaccinated with vaccines not yet approved by the World Health Organization (WHO).

Ria Sandhu, a second-year student in the faculty of science, was vaccinated with Covaxin, a vaccine developed by India’s Bharat Biotech. This vaccine is expected to be approved by WHO this month.

Although she was vaccinated this summer, she is currently considered unvaccinated in BC.

The only solution offered by UBC, apart from participating in weekly rapid testing, is to get vaccinated again here in BC.

“That solution doesn’t make sense to me,” Sandhu said, who said she is uncomfortable with mixing vaccines from different manufacturers. “I don’t think it’s fair.”

UBC Broadcast emails sent to students in August and early September did not provide extensive guidance for international students with out-of-province vaccinations.

Since then, UBC’s COVID-19 response page and rapid testing page now both provide guidance on the necessary steps to take based on your vaccination status. On October 5, UBC released a Canvas course which included some instructions on how to get the BC vaccine card.

Upon contacting UBC about vaccination information specific to international students, The Ubyssey was also directed to the UBC COVID-19 response page.

However, there is still no direct point of contact for those with specific queries. For students in grey areas, like Gil and Sandhu, the web pages by themselves are not sufficient.

“I expect some more transparency on behalf of the university. And with regards to this unapproved status, I think it’s also their responsibility to keep us updated .... We are checking, but if there is no information that is easily available to us, it just makes this a whole other issue to deal with among so many other responsibilities you have,” Sandhu expressed, unsure of what steps to take next.

“There’s no information going forward. We don’t know what consequences there will be. It’s really stressful.”