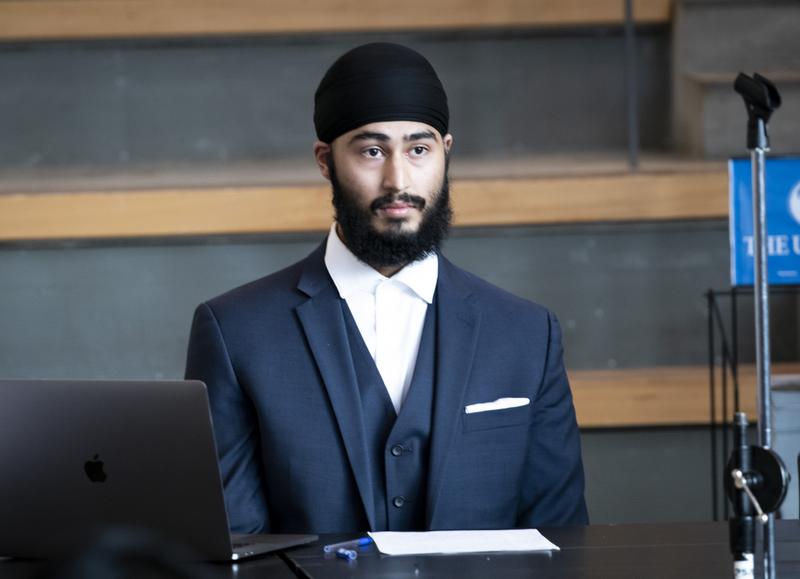 A presidential candidate has been penalized after trying to market his campaign by trying to attract attention with a pair of Apple Airpods and for aggressively tapping into an internet meme.

According to the committee, Kullar recently held a boothing event that used a banner, which read, “Jas Kullar is the Best candidate for AMS President” and underneath that, “CHANGE MY MIND.”

The play on a well-known meme attracted attention online when Kullar posted it, but it was also an unapproved form of campaigning. He was penalized for the same campaign event because his banner didn’t include “a voting link, logo, or voting dates” — information that campaign materials are required to display. 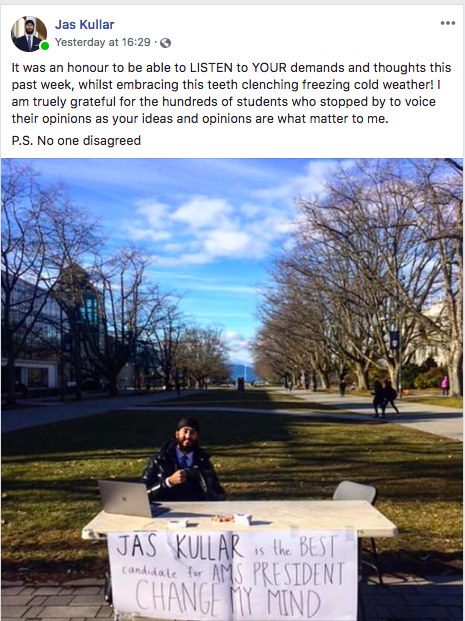 Following this event, Kullar posted a giveaway competition for Apple AirPods in exchange for shares and likes of his campaign event page on Facebook.

He published the giveaway this evening, and added “(Win Apple Airpods!)” to the page’s name.

This unorthodox effort to attract exposure to his campaign also landed him in trouble, as he did not clear it with the elections committee. Elections administrator Halla Bertrand said in a statement to The Ubyssey that she learned about Kullar’s violation “from an anonymous student.”

While the cost of Apple Airpods could be accounted for in his campaign budget, incentivizing would-be voters with expensive electronics is not an accepted campaigning method.

Kullar defended his choice by saying he was encouraging public participation.

The Elections Committee noted it’s not a form of campaigning an average student can use, and sets a dangerous — not to mention expensive — precedent.

“The Elections Committee is concerned about the Airpods specifically, as we believe that AMS Elections should be accessible to all, regardless of socioeconomic status,” said Bertrand. 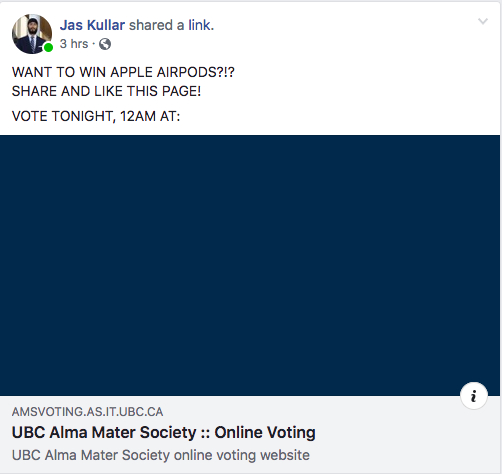 Due to subsequent penalties for Kullar’s multiple violations, the elections committee has temporarily suspended his right to campaign from March 10 at 11 p.m. to March 13 at 11 p.m. This is the longest any candidate has been suspended in this election cycle.

The committee has also ordered him to take down the posts. If he does not comply, Bertrand wrote that “further action will be taken according to the Campaign Violations and Penalties document. “

As of 12:14 a.m. on March 11, the posts about the giveaway and boothing event are still online.

While Kullar said he has yet to finish reading through the email from the Elections committee, he said he would dispute the penalties if possible.

“if not then i shall see what appropriation needs to be taken,” Kullar wrote.