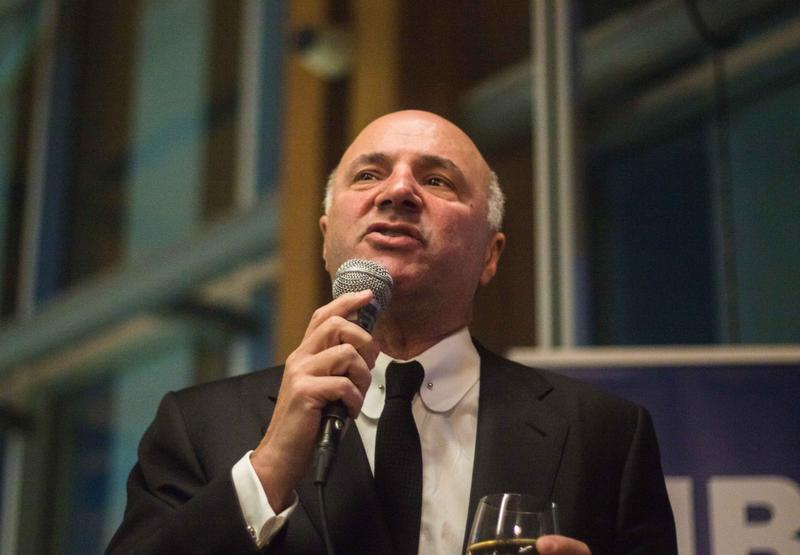 He kicked off his introductory speech reminiscing about the time when he was in university — an “amazing time to start a business.” Now, he said, he’s worried about children’s futures. According to O’Leary, the catalyst for his entrance into the CPC leadership race was the recent Liberal decision to run deficits for 38 years in a row.

“Wow, are you getting screwed,” he said. “What I care about is that my son and daughter have the same opportunity I had.”

Although O’Leary didn’t lay out many specific plans to make Canada “amazing” again, he detailed a few of its current problems. Businesses aren’t coming to Canada, according to O’Leary, because corporate taxes and fiscal policy aren’t competitive with the United States or Mexico.

“We just need to be competitive. We don’t have to be the lowest of anything,” he said. “Taxes [are] too high, regulation’s too much, carbon’s screwed up.”

O’Leary made sure to reinforce his status as an outsider to politics, noting his lack of entrenched allegiances and debts. He took care to distance himself from US President Donald Trump, though, saying that their similarities end with their respective reality show fame.

“If I built a wall in this country, I wouldn’t be here,” he said, citing his Irish background.

“Our country will always welcome anyone from anywhere that wants to start a family and build a business. That’s a competitive advantage.”

The Gallery was packed well before O'Leary was scheduled to arrive at 9:30 p.m. Jack Hauen

On the environment, O’Leary stressed his belief that cap and trade policies don’t work because big companies simply buy credits instead of lowering emissions, while small companies can't compete. He promised to eliminate carbon taxes, but that he’s “not going to let people pollute.”

O’Leary said that reducing Canadian emissions was not the way to help climate change, noting that Canada absorbs four times more carbon than we emit (this number is actually likely closer to 20–30 per cent more than we emit, but unconfirmed). He praised carbon sequestration technology developed in Canada, and promised to spread it to countries with higher emissions, like India and China.

“Every embassy in Canada after my administration starts will have an officer there selling that technology to the Asian, Indian and Chinese countries,” he said.

In an attempt to court the youth vote, O’Leary made three more promises: to legalize marijuana; that he’s “got your back” if you identify as LGBTQI or “whatever you fit into”; and that he would not revisit changes to abortion law.

Although there have been no criminal laws governing abortion in Canada since 1988, other CPC leadership hopefuls are definitively anti-abortion. The Campaign Life Coalition, which advocates for pro-life stances, noted that Peter Lemieux supported anti-abortion legislation in parliament, and called Brad Trost an “outspoken ... pro-life advocate.”

After his 24-minute speech, he took some questions from the crowd. The Ubyssey was chosen first, and asked which specific youth-oriented economic policies he’d implement if elected.

Unlike Trudeau, O’Leary said that he would wait to release a budget until he saw what kind of policies emerge in the US with regards to taxes, carbon and regulation, and said he’d simply match them.

“When money comes to America or to Canada or Mexico ... and says, ‘Where do I want to start a business?’ It’ll come here first,” he said.

O’Leary believes that if regulatory rules and taxation wouldn’t be the deciding factor for which North American country a business would locate to, it’d come down to inclusivity. “This is a better country than the US anyway. I don’t care where you were born — welcome to Canada.”

The second question piggybacked off O’Leary’s earlier promise to legalize marijuana. Would he consider decriminalizing all drugs?

“No. There’s some bad shit out there.”

In response, a student asked about Vancouver’s Downtown Eastside drug problems, which, in her opinion, require federal attention. How does O’Leary plan to deal with them, if he also promises to lower taxes?

First, O’Leary praised Vancouver’s safe injection program, noting that “at the end of the day, some compassion is important. Nobody wants to be a drug addict.”

In regards to the student’s question, he promised that economic growth under his leadership would take care of any funding issues.

The next question had to do with real estate in Vancouver and across Canada, which has seen a significant spike in recent years, so much so that it has alienated many young buyers from the market. What would he do to reduce prices?

O’Leary placed the blame on government intervention for Vancouver’s real estate prices, and embraced foreign investment. The problem, he said, was that there isn’t enough room to build more housing. He’d like to increase the space for new housing development by 30 per cent.

“The reason housing prices have gone up so quickly here is there’s not enough land available to grow the home on. We need more access to land to be zoned for housing so you can buy an affordable house or condo because there’s more of them,” he said. “Trying to impose taxes and slowing the growth of housing is the wrong way to solve the problem.”

A student asked how O’Leary would navigate First Nations issues and relationships with Indigenous peoples.

“They want to enjoy the same lives that we enjoy. We’re all the same people. We’re all humans,” he said.

As an example, O’Leary cited the Halifax moratorium on gas extraction. Advanced technology, he said, opened up an opportunity to strike a deal.

Next up, Ubyssey reporter Moira Wyton asked O’Leary how he plans to ensure Canadian citizens’ freedom of mobility as Trump continues his attempts to implement his travel ban, and if O’Leary would implement any type of immigration reform.

The travel ban, in O’Leary’s opinion, was “not a cool move.” The fact that it has been repeatedly struck down by the courts “shows you that the system works in the US,” he said.

With regards to immigration, O’Leary reiterated his support for Canada accepting skilled labourers from all over the world. He has been meeting with companies, he said, who have asked if he’d approve a fast-track program for skilled immigrants and their families to enter Canada, if they attended a Canadian university when they got here.

“Our immigration will be for people who want to form families and grow businesses,” said O’Leary, who promised to make Canada “a shining example to the world” in terms of immigration and diversity. He did not mention whether he would continue the Liberals’ plans to expand Canada’s intake of refugees.

Next, O’Leary was asked by Ubyssey staffer Zubair Hirji about economic policy. Hirji cited the Solow growth model, which says that the key to long-term economic viability is innovation. After an interruption from O’Leary, Hirji got to his question — whether he would continue to invest in innovation as prime minister.

“When you ask the government to innovate instead of entrepreneurs, you get zero productivity,” said O’Leary.

When challenged by Hirji to cite a study that backed his claims, O’Leary pointed to countries like Switzerland, Denmark and Sweden, which have relatively low corporate tax rates and high personal tax rates, and which he believes to be better examples of innovation than Canada’s model.

Lastly, a student asked whether O’Leary’s plans to lower taxes would affect healthcare or tuition. If he hits his target of three per cent GDP growth, O’Leary said, “you’ll get what you want in healthcare.”