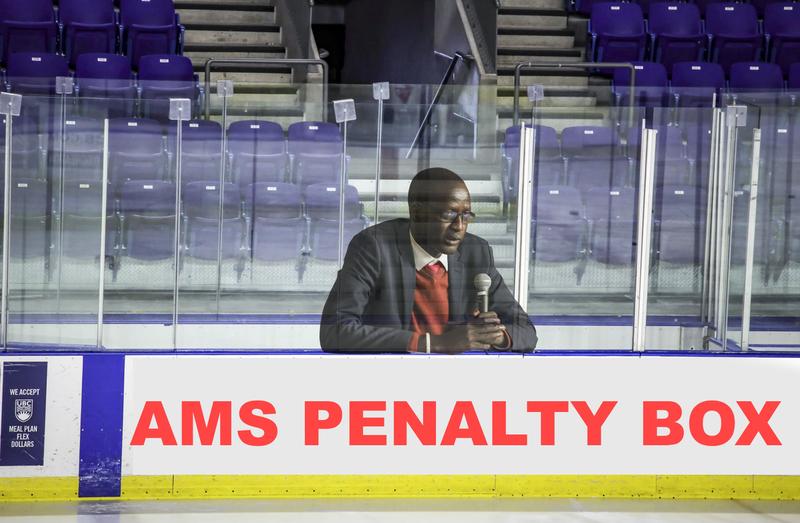 Another incumbent running for AMS president has been penalized for accessing private Clubhouse email addresses during the campaign.

Current AMS VP Finance Kuol Akuechbeny received two penalties: one for accessing the email list through his current position and another for sending emails requesting endorsements and failing to blind carbon copy — or “BCC” — the recipients.

According to Elections Administrator Halla Bertrand, the AMS Elections Committee received complaints yesterday from club members about Akuechbeny soliciting endorsements via private Clubhouse email addresses. These addresses were not visible to committee members when they use their personal accounts.

As the current VP Finance, Akuechbeny has administrator access to Clubhouse.

According to Akuechbeny, he did not believe he was accessing private information. He says he asked his friends about the level of information available through their Clubhouse accounts to judge whether email addresses were public — but forgot that they are club executives and would also have administrative access to their clubs’ membership lists.

“They went in and were able to access everything so I thought ‘Oh, two people is really good,’ so I went ahead and sent out the emails,” he said.

Akuechbeny said he noticed the error when another friend — who isn’t a club leader — tried to help him with the emailing but could not get the same level of access. He also received complaints from students he emailed.

“I told them I’m sorry first of all,” he said, adding that he responded to most or all of the complaints.

Akuechbeny said he reported the violation to the Elections Administrator, which Bertrand confirmed.

The Elections Committee has suspended Akuechbeny’s campaign privileges between March 4 at 2 p.m. and March 5 at 2 p.m.

He isn’t the first incumbent to be penalized for misusing their power during campaigning. AMS VP Administration Chris Hakim lost a day of campaign privileges for the same violation on February 28.

Akuechbeny noted that it’s difficult for AMS staff to see if they are logging in as a staff member or a student, cautioning next year’s candidates to be mindful of the issue.

On top of this penalty, the committee also banned Akuechbeny from asking for endorsements until the end of the campaigning period, which is March 15 at 5 p.m.

He must formally reject any endorsement resulting from mass-mailing on his online platform and return any financial donation.

“I accept the mistake on my end and I did send all the apologizes to the clubs that received my emails,” Akuechbeny said. “If a couple of people didn’t receive that, I hope they hear it from the piece.”