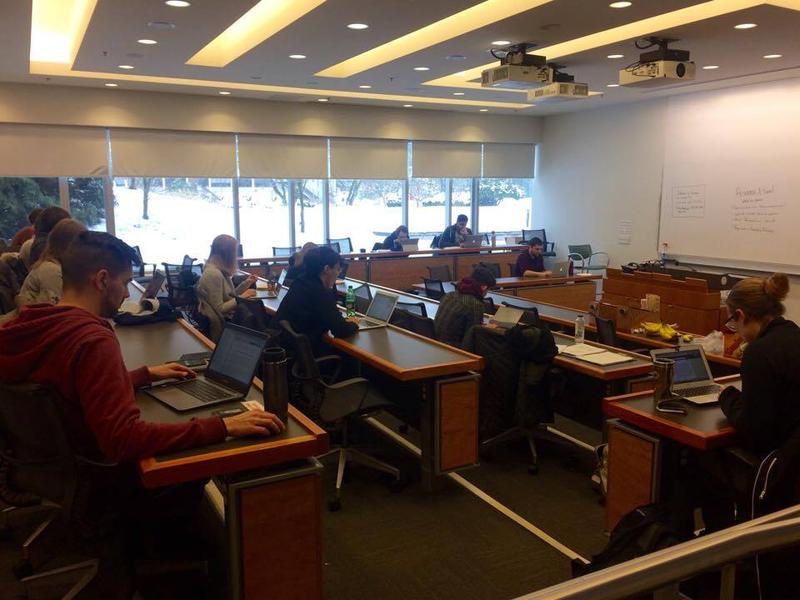 From 8 a.m. to 8 p.m. yesterday, students at UBC's law school participated in a national “research-a-thon” in which law students across the country examined the Safe Third Country Agreement between the United States and Canada.

Under this agreement, refugee claimants must request protection in the first safe country they arrive in, unless they qualify for an exception to the agreement. The agreement is based on Canada's assumption that the US is a safe country and vice-versa. The Government of Canada website claims that this agreement “helps both governments better manage access to the refugee system in each country for people crossing the Canada-US land border.”

“If a refugee comes to the Canadian border, we can say to them, ‘We’re not going to process your claim, we’re sending you back to the United States’ to seek a claim there, ostensibly under the understanding that America is a safe country. The research that is being done is examining why that agreement should be revoked or at least suspended,” said third-year law student Andrew Eyer.

However, recent back-and-forth on restriction of immigration and travel to the US has called into question the safety of that country for some, leading to this research-a-thon.

Rochelle Kelava, a law student and organizer of yesterday’s event, explained that the idea was originated at McGill University’s law school, when a couple of students decided to start a study group in order to examine issues pertaining to the Safe Third Country Agreement. Within two hours, they had over 50 people who wanted to attend and within a day or two, all 22 law schools across the country had committed to being involved.

From 8 a.m. on February 4, participants took part in four-hour shifts, researching the implications of the Safe Third Country Agreement in the face of recent events.

During her shift, second-year law student Elisabeth Giffin worked on creating an annotated bibliography of academic sources and human rights reports that speak to the detention that can occur when refugees go to the land border between Canada and the US.

“Personally, I’m doing it because I came to law school to learn some tangible skills that I could use to fight for the causes I care about,” said Giffin. “I don’t want to look back in 10 years and think that I didn’t do anything or stand up when people were being oppressed.”

Kelava shared her enthusiasm regarding the student involvement and engagement at the event.

“There has been an incredible response. So many students are willing to help with the support from the faculty, as well as our dean and many of our professors,” said Kelava. “I think as students, so often we are so focused on thinking about issues and noticing them, but we can sometimes feel quite helpless. This event has gotten such a positive response because it’s something we can actually do and it will hopefully create positive change.”

“It’s been great — we’ve got a lot of people coming in person as well as electronically,” said Eyer. “We’ve had lawyers come in, people from different faculties or backgrounds, so it’s been nice to get a mix of different people.”

After the event, the research was sent to the Canadian Council for Refugees, where they will utilize the information as they see fit.

“We really want to come together across the country as a unified front to show that the next generation of lawyers does not support this kind of legislation,” said Kelava. “There are citizens who are paying attention and who care.”