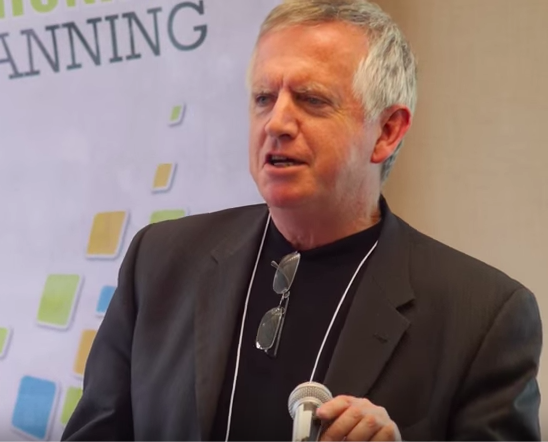 “I generally think no one understands just how expensive it is.” Screenshot from Youtube video, "Patrick Condon: Metropolitan Sustainability and Urban Development."

Eighty-seven per cent of Vancouverites and almost every mayoral candidate from this year’s municipal elections are interested in extending the Broadway subway to UBC.

But one UBC urban design professor has come out against the project.

In an article for The Tyee, UBC professor and former mayoral candidate Patrick Condon criticized the subway extension as an over-expensive way of accommodating students, staff and faculty who can’t afford housing near the university.

He argued that UBC should instead substantially increase the amount of university-related housing on campus and rent it out at affordable rates.

“In three years, we could solve this housing crisis for everybody at UBC,” Condon said. “We don’t need to wait 20 years for that subway.”

Condon’s major concern with the subway extension is that it’s an expensive solution to a simple problem.

The initial expansion of the subway to Arbutus Street will cost $2.8 billion in total — and Condon said if the cost-per-kilometre is similar for an extension, extending it to UBC could cost up to $4 billion dollars.

“I generally think no one understands just how expensive it is,” he said.

Condon believes that UBC could sell land leases to developers to finance the project, who will then build “thousands of condos priced for the global market” throughout the endowment lands.

He sees the prospect of building market housing unaffordable to students to fund a subway that will bring students priced out of Point Grey to campus is ironic.

“If that’s the reason why you wanted the subway, build the housing right here on campus instead of those market high-rises. You still make a profit because the land is free, your students get affordable housing and so does your staff and faculty,” said Condon.

He argued the university should focus its attention on adding as many as 20,000 housing units for students, staff and faculty and renting them at affordable rates.

“In the process, we could make this campus a fantastic place to be,” he said.

“With all that housing here, night life would be fantastic. We’d have clubs, we’d have bar rooms, pubs, and recreational facilities. This place is dead at night.”

“We need to be planning for the long term”

Associate VP Campus and Community Planning (C+CP) Michael White said a subway extension is the best solution to connect the university to the rest of Metro Vancouver while supporting on-campus growth.

White hinted that new revenue generated from future campus developments would not be the only way for the school to foot part of the bill.

“[It] could be revenue that’s generated from increased patronage of destinations and services out here at the university. It could be land that’s donated as a contribution to a station,” said White.

He said that some of these developments will include market housing, but increases in non-market housing and faculty housing could also help fund and provide demand for the project.

White also pointed out that the university’s goal is to not only bring the Broadway subway to UBC, but to “aggressively” increase housing availability on campus as well.

“In our minds, it’s an ‘and,’ not an ‘or,’” he said. “We need to be providing much more housing … and we need better connectivity to the rest of the region.

According to C+CP’s statistics, the university plans to add 5,705 student housing units from October 2018’s amount by 2031.

Still, Condon remains skeptical that there will be enough demand for the subway, noting that current transit ridership to UBC decreases by 40 per cent after Arbutus.