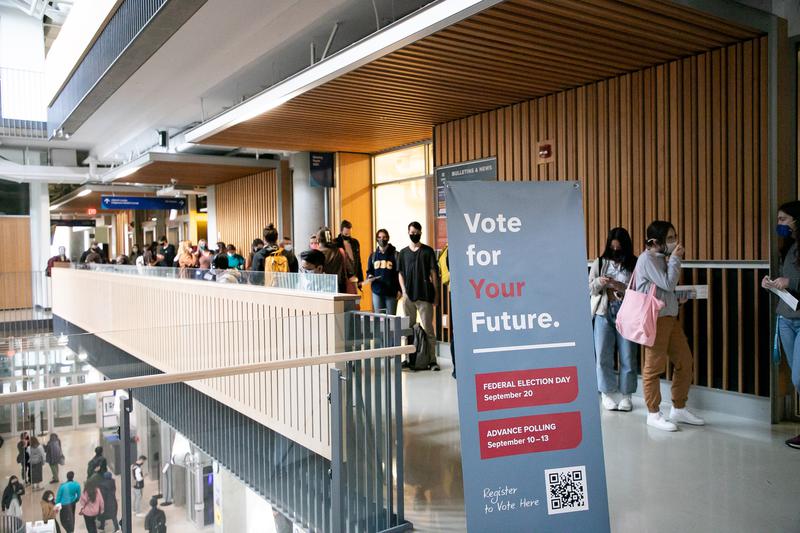 The major difference between voting this year and in 2021 was the line. Isabella Falsetti

Some students waited over an hour to vote in the 2021 Federal Election on campus today.

The line trailed out of the only voting site at UBC, spanning the second floor and wrapping around to the AMS resource groups. Students in the line spoke of difficulties getting registered to vote and concerns about the cancellation of the Vote on Campus program.

For Matthew Chen, a third-year science student, the major difference between voting this year and in 2021 was the line. Chen, who was about a dozen people from the front of the line, told The Ubyssey that he had been waiting to vote for about an hour. Ryan Sutherland, a third-year engineering student, said he would likely miss his next class due to the line.

“There's a lot of students back on campus for the first time, so I kind of understand why there's a line. It would have been nicer if it was a little bit shorter, but it's also kind of a duty to vote,” said Sutherland.

Kayla English and Sydney Patterson, both first-year students, didn’t get their mail-in ballots for their Ontario ridings in time so are now voting in Vancouver Quadra.

“It's a little tricky because we're in residence and registering and everything. We didn't get our voter cards in time,” said English.

“We were registered to vote by mailing, because we're from Toronto, and they didn't send us the ballot on time and we don't have ballots,” said Patterson.

Elections Canada cancelled the Vote on Campus program this year — a program that allowed post-secondary students to vote in their home ridings from their university campuses. This program would have allowed students like English and Patterson to vote on campus in their Toronto ridings.

“I would have rather probably voted for my home riding just because I'm more familiar with the candidates and everything,” said Georgia Simkin, a first-year student.

“I know a lot of people — especially for first years — they're not familiar with this area yet. And they'd rather probably vote for somewhere that means a little bit more to them,” Sutherland said.