Year-end review: VP Finance Lucia Liang is ‘fine-tuning’ her goals as she enters her second term 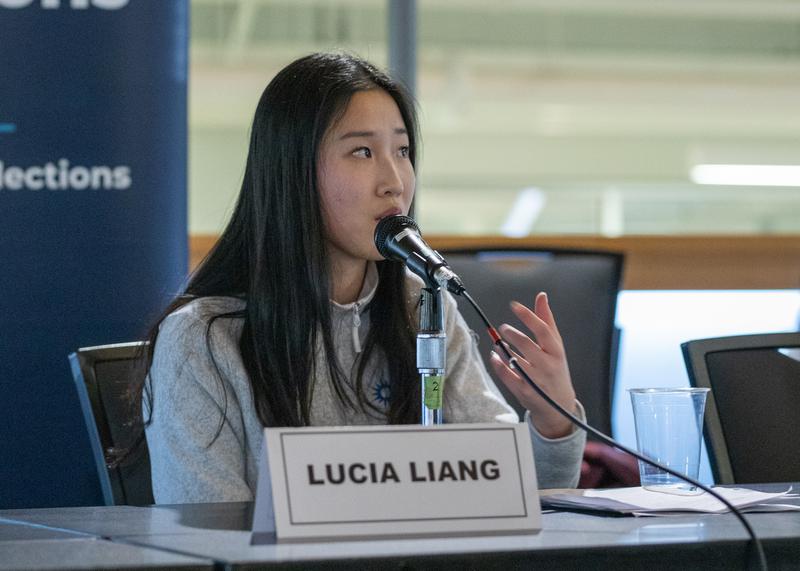 “In this following year, a lot of the things I do will be fine tuning and perfecting a lot of the bigger picture that I had coming into my first year." File Zubair Hirji

As Lucia Liang winds down her first term as VP Finance, she said she’s “very happy” about her year and that she’s excited to move into her second term.

The second-year arts student came into her first year with the AMS on a platform of “sustainability, affordability and transparency,” and her goals included introducing a new ticketing platform and implementing an online money transfer system.

“I was able to accomplish a lot of the goals that I initially walked into. And the ones that were not completed were due to a contract-end day or whatnot, so I'll continue to work on those projects,” she said.

One of Liang’s main executive goals this year was to “boost affordability for students” by moving away from using Showpass as an online ticketing platform and looking into the use of an alternative ticketing service with lower service fees.

The AMS’s contract with Showpass doesn’t end until July 2020, so Liang says her team has been focused on “wide-scan industry research” to figure out what happens after their contract expires.

She’s also done some consultation with constituencies’ VPs Finance and club treasurers, although she did note that formal consultation in Finance Caucus meetings had poor attendance. Instead, she said that she’s had “offline” conversations to find out what the major concerns are.

“Security is extremely important … [treasurers and VPs] would rather go with a more robust company than a startup,” she said, noting that the Clubhouse platform that the AMS previously used came from a startup.

Liang is particularly proud of the continued work she’s done this year on helping AMS transactions become paperless with the introduction of RBC’s online money transfer system. Now, she explained, instead of forcing students to come to the AMS offices during working hours to submit reimbursements and pick up cheques, students can simply receive an e-transfer with their money.

“I’m at a phase where all of our work in the past 10 years [is] coming together and the knowledge that we have accumulated is ready to launch a system that is working and will work,” she said.

Though Liang implementation of the e-transfer system, she responded to criticism about the under-communicated roll-out of the system earlier this year by saying that her portfolio is too understaffed to handle large-scale e-transfers. She’s since received criticism for a general lack of communication with clubs and constituencies and for dropping the ball on getting money to clubs in a timely fashion.

She said that the slow response times to emails and requests for transfers were due to vacancies in two student staff positions halfway through her term, coupled with an accounting department of one person, rather than the three normally hired.

“It was a matter of bad timing,” said Liang. “But definitely, we're always trying to figure out the best way to communicate to our students and to receive as much consultation as we can.”

Moving forward into her second term, Liang does have some ideas for streamlining the communication process with clubs and constituencies. She’s hoping that “ensuring that all available information is present and is easily accessible” by improving treasurer orientation and the usability of the AMS’s finances webpage will help with the situation so that club treasurers have other resources to consult before emailing her staff.

Liang believes that the knowledge she’s gained this year will help her “make the system work best for the students” next year.

“In this following year, a lot of the things I do will be fine-tuning and perfecting a lot of the bigger picture that I had coming into my first year.”