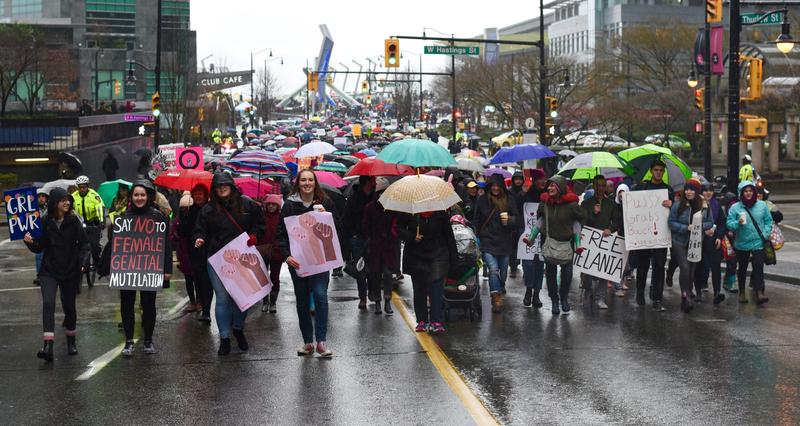 A year after the first women’s march, around 2,000 people arrived downtown this morning in a renewed show of support for women’s rights.

Hosted by March On Vancouver, the event saw people rallying at Jack Poole Plaza before taking to the streets of downtown. Chants of, “Hey hey, ho ho, Donald Trump has got to go” and honks in solidarity grew louder as the crowd marched past Trump Tower on West Georgia.

Held close to the one-year anniversary of the worldwide women’s march against Trump’s inauguration as US President, the event also tapped into the momentum created by recent movements like #MeToo and Time’s Up.

“The last year was pretty horrible — all the things that have been happening to people and all the reversal of good progress have really charged up a lot of people with renewed energy,” said organizer Samantha Monckton. “People are not going to take it anymore.” 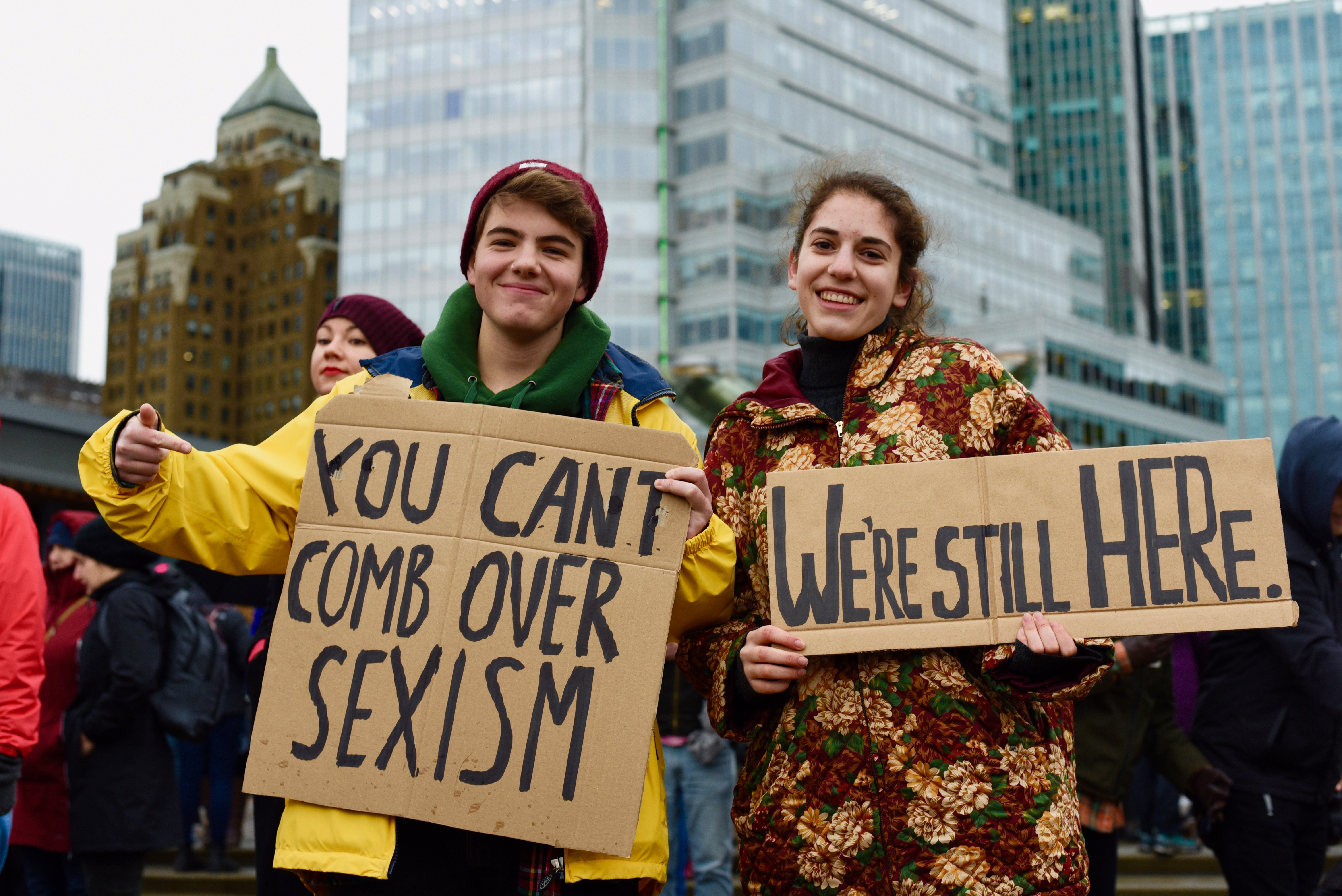 Sexual and other types of violence against women were discussed by many speakers.

“Never forget that until we address violence against women, we will never have equality,” she said.

Indigenous speaker Lorelei Williams told stories of missing and murdered Indigenous women, including those of her own family members’ loss and survival. Williams also performed with her dance troupe, Butterflies in Spirit, to the live-performance of “Sisterz” by Indigenous hip-hop artist JB The First Lady.

Other issues relevant to Vancouver like Islamophobia, childcare and wage disparity were touched upon as well. Speaker Noor Fadel, who was assaulted on the Canada Line last December for being Muslim, performed a poem about her thoughts on the attack.

“Nowhere is going to be perfect — anywhere you go, you will experience some sorts of things that will harm you or change your perspective,” Fadel told The Ubyssey. “I decided that I want to keep pushing myself and I want to use my voice to speak up on the incident because I want others to feel inspired to speak up as well.”

Following criticism about the lack of intersectionality in last year’s march, this year’s organizers stressed its importance in regards to race, class and sexual orientation.

“I specifically participated in the women’s march last year and I found that it was lacking representation of particular groups that are marginalized,” said UBC GRSJ Professor Litsa Chatzivasileiou. “This year, the organizers have made conscious effort to include these groups and I really applaud them for that … the more intersectional the women’s march becomes, the more successful and effective it [will] be.”

Not featured last year, Black Lives Matter Vancouver presented two speakers this time, who discussed Hogan’s Alley as the site of a former thriving Black community and its rebuilding in the future. The importance and diversity of the Black community in Vancouver were touched upon as well by speaker Judi Lewinson, host of Black Voices Vancouver.

Other speakers also touched on topics like the $10 a day child care plan, rights for domestic workers, labour rights. They also point out the difficulty for immigrant women and workers to join the #metoo movement. “Landed status now!”

Speaker Hailey Heartless recounted how she did not feel comfortable attending the march last year as a trans woman and a sex worker, as well as the hate she received for being announced as a speaker this year.

“Stigma is weaponized to keep us out of feminist spaces,” said Heartless. “[Sex workers] are not victims ... Sex work is real work — we face stigma when outsiders call us prostitutes ... and we face stigma from laws that take away our agency.”

But she is hopeful that this will not be the case for next year’s march.

According to their Facebook event, March On Vancouver “uses an inclusive definition of ‘woman’ that includes trans women, gender queer women, two-spirited and non-binary people.” The pink pussy hat was also not promoted for its projection of exclusivity toward trans women, though some could still be spotted in the crowd.

Many UBC students at the march, like third-year GRSJ student Lucy Bogle, were impressed by the range of speakers and the topics of their speeches. And with this inclusivity in mind, they believe that their own university has “a far way to come” in terms of supporting students with these equity issues.

“There are systems of support in place at UBC, but … the people who are able to access these supports, financially, physically and mentally and are able to advocate for themselves generally are people with privilege,” said Bogle. 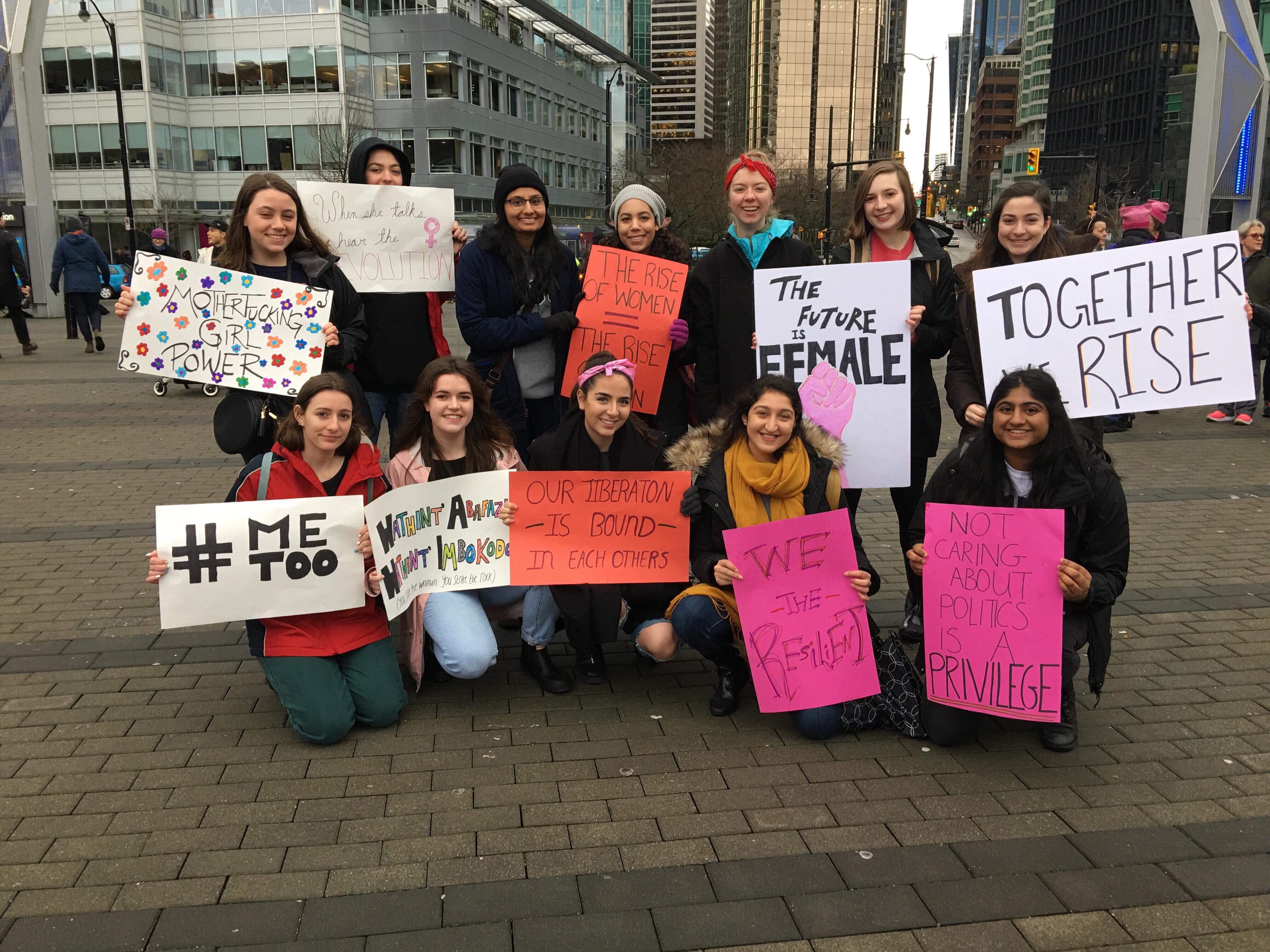 AMS Equal Voice President Fatima Aamir agrees, while also discussing the role that student clubs can play in the effort.

“UBC shouldn’t be afraid of having difficult conversations ... We really need to acknowledge these privileges and have these uncomfortable conversations in the university because universities are supposed to be a safe environment, a place where we can learn and grow,” she said.

“I think a lot of student clubs are really stepping up to this and I think on-campus activism is growing, but I think these issues need to be discussed on a wider scale, across faculties and interest-groups.”

Chatzivasileiou said UBC could do more to support their students, especially in light of complaints about sexual assault or misconduct by employees in positions of power. And she stressed the need for more intersectionality when approaching these issues — either as students, university administrators or march organizers.

“When we make it more intersectional, we can start talking about the specific issues and solve them,” Chatzivasileiou said. “I would not want to have the issue reduced to a very generalized form of what we understand as women.”