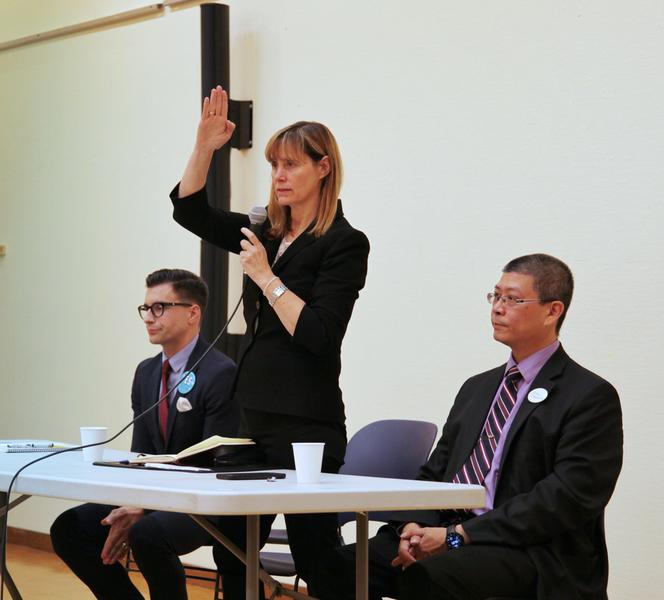 UBC Debate Society, the AMS and the Graduate Student Society (GSS) hosted a mayoral candidate debate on September 20 where candidates for Vancouver’s top municipal office discussed issues such as housing, transportation and safety.

As confirmed before the debate, David Chen of the ProVancouver Party, independent candidate Shauna Sylvester and Hector Bremner of the Yes! Vancouver Party were present.

Former NDP MP and independent candidate Kennedy Stewart, Ken Sim of the Non-Partisan Association (NPA) and former Conservative MP and Coalition Vancouver candidate Wai Young were invited but did not attend. Chief Ian Campbell of Vision Vancouver withdrew from the race on September 10.

The candidates opened the debate by speaking about their backgrounds.

“The reason why I’m doing this is because I don't have any other home than this,” Chen said, recalling how his parents immigrated to Vancouver with nothing.

Bremner also spoke about his financial struggle as a child. “When I came to Vancouver we were essentially homeless,” he said.

Sylvester noted that if she wins, she would be “the first female mayor in 132 years.” But she also stressed that she does not want people to vote for her because she is a woman — but because she is “the most experienced candidate.”

Sylvester is a professor of public practice at Simon Fraser University (SFU), where she also served as the first executive director of SFU Public Square and and the executive director of SFU’s Morris J. Wosk Centre for Dialogue. Outside of academia, she founded four organizations and sat on board of Vancity and MEC, two Vancouver-based cooperatives.

In comparison, Bremner has been serving as a Vancouver city councillor for NPA since 2017. Previously, he served as media relations firm Pace Group’s VP public affairs and as a board members on a number of non-profit organizations.

A certified professional consultant on aging and a certified financial planner, Chen runs a business that does financial planning for families with disabilities. He also chairs the Lord Strathcona Elementary’s Parent Advisory Committee and serves as president of a 500-unit strata.

All three candidates at the debate agreed that affordable housing is the main issue, but differed in how they want to tackle the problem.

Chen believes proper housing is a basic human need that the government is responsible for providing. Offering rent-control as the solution, he said it would “put pressure on the rest of the market that will create affordable housing.”

Sylvester hopes that “Vancouver becomes North America's capital for co-ops and co-housing” and added that the government should crack down on illegal room-renting through websites like AirBnB on Vancouver’s West side to combat a trend of emptying neighbourhoods.

“There’s no kids on the streets anymore,” she said.

Bremner spoke about ending “mandated mansions” near UBC, claiming that they are mostly empty and should be used as affordable housing for students and seniors.

Sylvester criticized his plan as unaffordable, arguing it focuses too much on increasing supply without moderating cost.

“[I] just don't see the affordability here, I just see more market supply,” said Sylvester, adding that the area itself is too far away from public transportation.

“That’s a scary response because it’s a seven-minute bike ride from UBC and it’s on a bus line,” Bremner responded.

Efficient and affordable transportation is another major topic for the candidates — but they disagreed on the root causes of the issues and their solutions.

Sylvester believes in extending the Broadway subway line to UBC in a single phase and increasing transit at night as women are at a higher risk of danger on nightly transit.

While expressing support for the extension to UBC, Bremner also believes Vancouver’s transit issue is a problem with the urban planning, noting that there should be affordable housing close to where people work or go to school.

Besides lowering the cost of transportation passes, Chen proposed the usage of fuel-cells — which produces clean energy — to cut transit costs.

Beyond these two topics, there is mutual agreement that there is a pressing need to increase Indigenous education for the community and to have the government work towards more than just reconciliation.

Lastly, the candidates were asked what the biggest public safety concern in Vancouver is.

Chen discussed the danger of xenophobia in Vancouver, Sylvester said homelessness and Bremner highlighted the opioid crisis as Vancouver's most pressing safety issue.