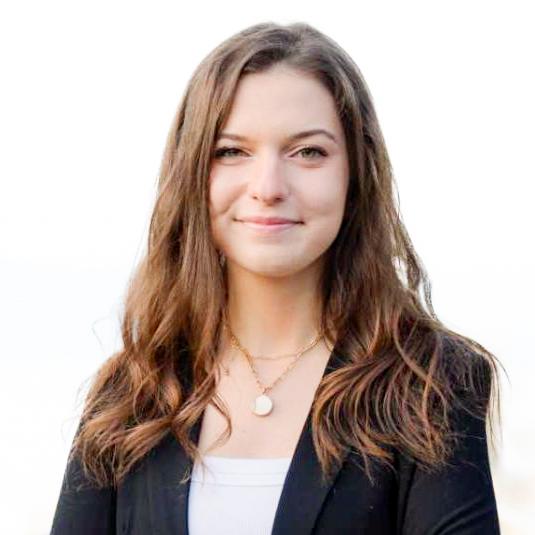 Nearly seven months into her term, Benson has checked off some of her goals, but has also left a few blank. Courtesy Lauren Benson

When Lauren Benson campaigned to become the next VP administration, she pledged to improve what she saw as one of the most criticized problems in the AMS: poor communication. Nearly seven months into her term, Benson has checked off some of her goals, but has also left a few blank.

One goal that Benson hailed as a definitive victory was Club Days — they were held as a hybrid event this year under COVID-19 regulations.

“We got a great turnout from clubs and from students, which was really exciting,” Benson said.

Benson noted the process of opening the Interactive Sustainability Centre was another exciting item to complete.

“It’s been great to see the centre come to fruition. I’m really excited to get more social programming in there as well,” Benson said.

During her campaign, Benson emphasized the need to create spaces in which students can talk to executives. While this space doesn’t seem to have been created formally, Benson said she has made efforts to be more accessible to students.

These efforts have included personal notes in the bi-weekly newsletters sent out to clubs, introducing herself to participants at Club Days and making executive office locations visible in promotional content.

“Just trying to be on the ground and present with students is something I really wanted to prioritize,” Benson said.

The Clubs Recovery Benefit, which was a cornerstone of Benson’s campaign, appears to have been stalled indefinitely.

On the COVID-19 dashboard, which Benson successfully established as one of her campaign promises, the message next to the Clubs Recovery Benefit reads: “more info to come, September 2021.”

Benson said she is still working on the funding for the benefit with the Operations Committee, admitting that the scope of the goal has had to be redefined because of changing COVID-19 circumstances.

Another clubs-related goal that Benson has made progress on is the platform CampusBase, which was under scrutiny due to privacy concerns and student confusion around how to use it.

Benson said that the data has been transferred into Canadian servers to increase security and promotional content is actively used to encourage student usage.

Two things that Benson hopes to prioritize for the remainder of her term are the Club Resource Centre (CRC) and the Hatch Art Gallery.

Benson hopes to make the CRC more geared towards commuter students, which she aims to do by hiring someone to replace the role of CRC manager and creating more programming for commuter students — whom she sees as a “missed demographic” — to make it easier for them to connect with clubs.

She also said that an exhibit will be opened at Hatch Art Gallery soon. However, at AMS Council on November 24, Art History Students’ Association President Yasmine Semeniuk said that the arts community at UBC has struggled to get in contact with Benson, and that they put together the most recent exhibit themselves, with little help from the AMS.

Reflecting on her term thus far, Benson said that despite the unpredictability brought on by COVID-19 and the associated public health orders, it has been an “incredible and eye-opening experience.”

She expressed gratitude towards her team and clubs, and encouraged students to get involved with the AMS.

“I think we do really great work here that ... can seem intimidating,” Benson said. “I personally love for students to come by and ask me questions.”

This article was updated on November 24 at 7:49 p.m. to provide more context on the status of the Hatch Art Gallery.