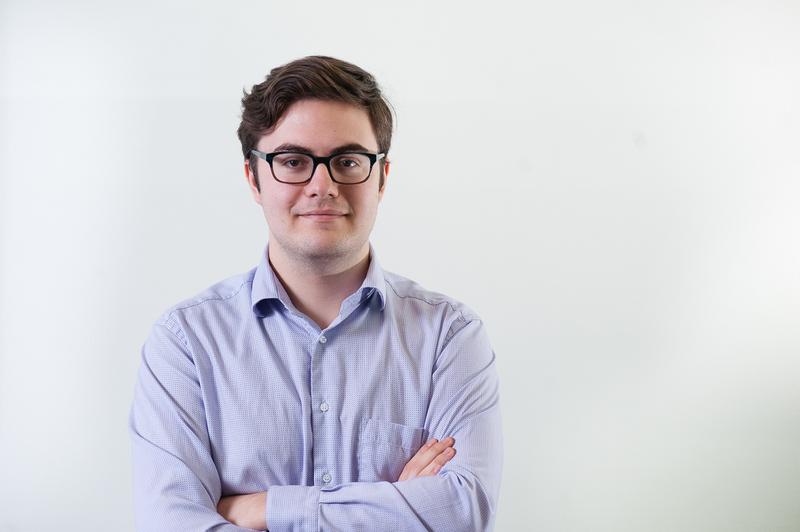 Max Holmes campaigned for his second term as AMS VP Academic and University Affairs on the platform of increased support for sexual assault survivors and student mental health.

Holmes is one of the AMS’s most visible, ambitious and productive executives. That doesn’t go unnoticed. Holmes has received praise for his aggressive student advocacy and roundtable approach to consultation.

He’s also received criticism from a mix of groups including fraternity members, supporters of sexual violence prevention, free-speechers and even some of the AMS’s own councillors.

Halfway through the year, this is where he stands on accomplishing his campaign promises and goals.

Support for survivors of sexual assault

Over the summer, Holmes started a small policy review that identified and clarified issues with support for sexual assault survivors.

Holmes also sent a submission to the Board of Governors to review UBC’s stand-alone sexual misconduct policy (Policy 131) in 2019. This lined up with what UBC already intended to do, according to a representative.

Holmes added that UBC and the AMS’s sexual assault prevention education campaign “was a major success.”

“As much as possible, we want to make sure that [sexual assault survivors] understand that they’re supported and that there are services here to support them that they have a choice for services,” said Holmes.

Holmes, a survivor himself, has been a vocal supporter of increasing support for the community in the past. He attracted support and controversy on the campaign trail when he publicly condemning the fraternities for controversial questions they asked him in a closed meeting in March. That led to a majority of candidates rejecting the Inter-Fraternity Council’s endorsements as well.

But in the summer, the AMS announced their intention to cut support services within the Sexual Assault Support Centre (SASC) — measures that Holmes spoke in favour of.

Holmes and the other AMS executives later apologized for the proposed cuts in a lengthy letter published after the decision was reversed. When asked about those cuts by The Ubyssey for this article, Holmes did not say why he personally supported them in the first place.

“When it came to services for SASC, the important thing that we're doing is that we’re advocating to make sure that survivors are supported and that they're supported not only through [Policy] 131, but that also we have an academic concessions policy that is survivor centred and compassionate,” Holmes said.

Holmes says he’ll push for future university policy to be “flexible,” “compassionate” and “transparent,” including sections on sexual assault survivors and mental health.

Holmes has made student mental health a priority. In September, Holmes wrote a submission to the Board of Governors questioning the delays of the Brock Hall Centre, and writing that the university was “prioritiz[ing] academic needs over the basic health and wellbeing of students.”

“Mental health is health,” Holmes said. He plans to lobby for a fully integrated health centre in Orchard Commons, including treatments for physical ailments as well as mental health issues.

“This integrated health centre will make sure for anybody who comes in, they are able to help and assist with whatever health issue they’re facing.”

He also said that a similar centre will be established in Brock Hall in a few years.

Holmes came out strong with a promise of a fall reading break for next year — but the chair of the Senate committee in charge of that break was quick to urge caution. At AMS Council’s last meeting of the year, Holmes was more hesitant to promise change — especially since accredited degree programs like engineering could be left out of a prospective reading break.

Typically, the AMS stands by a policy of not opposing tuition increases unless they’re above the 2 per cent annual cap. But this year, Holmes and the AMS have come out strongly against all tuition increases.

The increases passed, but the vote at the Board of Governors was the closest in several years.

“I think this vote has sent a clear signal to the UBC administration that they need to seriously address the issue of affordability and not just assume tuition increases are just kind of given approval,” Holmes said.

The AMS is also working to create a report on the cohort tuition freeze, but Holmes said with the current IT model that it wouldn’t be feasible.

“But since that structure is being renewed, we hope to push for a cohort tuition freeze in the future,” he said.

Holmes also has big plans for the Excellence Fund allocations, and hopes to persuade UBC to put more of it towards student priorities.

“[The AMS is advocating for] $1.5 million for Indigenous scholarships, another million dollars for matching scholarships, a million-dollar investment in work learn research positions, and an off-campus pilot,” Holmes said.

But the Excellence Fund itself is funded in part from from increases in international tuition — which the AMS opposed. Holmes responded that this only raises the importance of having the fund go to student priorities.

“We’re looking at the situation that we are in now, [and] it would be foolish for students not to advocate for funding from the excellence fund,” Holmes said. “At the moment, it’s there.”

Consultation and collaboration with students

Simply put, Holmes has had a busy year.

Aside from traditional events like the #textbookbroke campaign, Holmes co-hosted a town hall on the proposed fall reading break, an Indigenous discussion circle that culminated in the formation of a new Indigenous committee, and spearheaded a partnership with UBC’s “We Believe You” campaign.

“This year, just the within just the Academic and University Affairs Office, we’ve engaged over 1,500 students in AMS advocacy,” Holmes said. “It’s really a commitment from our office to engage with as many students as possible.”

Holmes said that increased engagement with students has had positive effects on the students’ own advocacy, citing the recently-formed AMS Indigenous committee as an example.

“The Indigenous students, who completely deserve the credit for creating the AMS indigenous committee, were able to do that through the AMS having increased engagement with students,” he said.

But in other places, outreach and advocacy has stumbled or attracted controversy.

While Holmes is not the public face of the AMS — that’s President Marium Hamid — his role as the chair of the advocacy committee and the extent of his portfolio tends to put him front and centre on controversial issues.

Holmes was vocal in denouncing Ben Shapiro’s visit to campus, which criticism from the Free Speech Club who argued the AMS had not acted to denounce a string of antisemitic incidents on campus last year.

After low turnout at the AMS’s annual general meeting (AGM), councillors backed a motion to formally criticize the executives for failing to promote it, which eventually failed to pass on a hairpin vote.

While Holmes is not in charge of organizing the AGM, he strongly opposed the motion and executive committee meeting minutes show him questioning the desire for a quorate meeting.

Holmes said those incidents shouldn’t reflect his overall approach to advocacy or overshadow successes in his tenure.